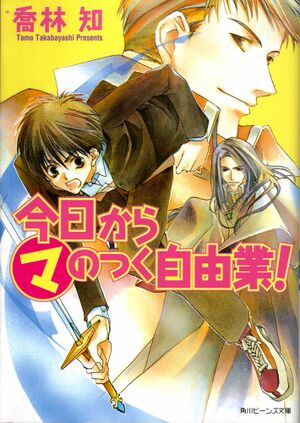 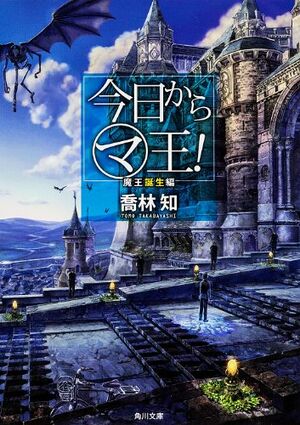 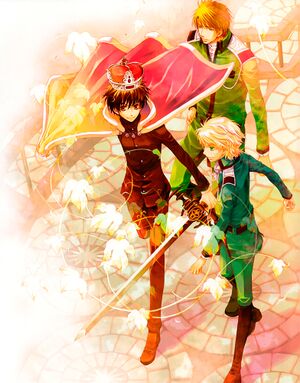 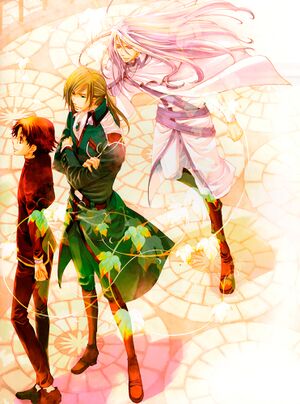 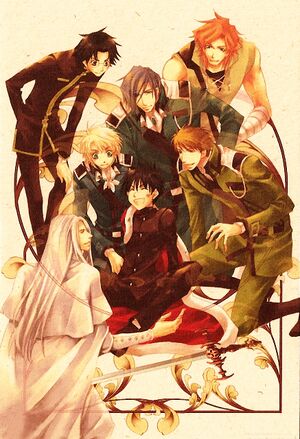 Maru-MA also known as The MA Series (㋮シリーズ) is a light novel series written by Takabayashi Tomo and illustrated by Matsumoto Temari. The common name or community name of the series in English and Spanish is Kyou Kara Maou!. It's published by Kadokawa Shoten since 2000. There are currently 22 novels released, and a big number of special chapters and mini novels, and also more than 70 Drama CDs and 6 Radio Shows.

The manga adaptation, officially released as Kyo Kara Ma No Tsuku Jiyuugyou!, ended after 117 chapters on 2016 and there's currently a Gaiden continuation of it. The series also counts with three musical adaptations known as Maomyu (jp. Mageki).

Story Synopsis
Shibuya Yuuri was living a pretty normal life. That changed the day he was dunked into a toilet after an attempt to save a classmate from a gang of bullies. Instead of just getting a good soaking, he's pulled in. The next thing he knows, he's in a world that vaguely resembles medieval Europe. If that's not odd enough, he's told that he is to be the next Maou (Demon King), because his soul once was part of that world. The Maou is the King of the mazoku (demon tribe), who are coexisting not-so-peacefully with the humans in this world. Much to his subjects' dismay, he's totally different from the rulers they're accustomed to. He's kind, considerate, a believer in justice, and not willing to use violence to solve conflicts. Not exactly someone they want running a country on the very brink of war. Now, Yuuri has to deal with trying to become a good Maou, while at the same time attempting to adapt to this land's customs and culture, all in a world where the tension between the humans and mazoku is reaching its peak.

Comments? Questions? You can talk about the project in the forum post

In case you prefer to read the series in chronological order including all specials in between the main novels (shorts, mini novels, etc), you can check the reading guide here.

Simply called short-shorts, they're one or two paragraphs long. There are many stories like these published in magazines and the Ma-hon.
TOTAL AMOUNT: unknown.

These stories are 20 to 40+ pages long. Many were not included in the original novels.

Text translations of the manga on the Bushiroad website.

Short stories written by Takabayashi-sensei included in the game Hajimari no Tabi.

Report broken links at Redglassesgirl-maruma Tumblr or by message here in Baka tsuki.

4. The Maou, the second and third sons, a common landscape.

6. The other side of "This Time it's the Ultimate Ma!Weapon!"

9. The other side of Tomorrow a Ma!Wind Will Blow!

19. A great day with a wonderful Ma-friend - Conrad & Günter

21. A great day with a wonderful Ma-friend - Yuuri & Wolfram

22. A great day with a wonderful Ma-friend - Conrad & Yuuri

23. A great day with a wonderful Ma-friend - Yuuri & Murata

24. His Excellency and the MA Love Journal!?

26. The Mazoku's Casual Trip to Earth - Yuuri and Wolfram

29. The Mazoku's Casual Trip to Earth - Günter, Yuuri and Murata

30. The Mazoku's Casual Trip to Earth - Wolf, Conrad and Gwendal

34. From today on I'm a heroine!? Aiming for the Koshien sky! Murakenzu's day off.

45. These are the MA Holidays!‏

57. His Majesty, the second and third sons' jokes that never fail

59. This is the MA undesirable but, inseparable relationship!?

71. Maou Heika and the person who named him "I can't sleep tonight".

1. Kyou Kara Maou! Thanks to the Fans! There's Valentine's Day in Shin-Makoku too!?

2. June Bride - There are June Brides in Shin Makoku too!?