The girl murmured to herself.

...While flying through the dark night.

...While recalling the final sensation on her lips as she parted with him just now.

—This was fine... With this, I can finish my mission.

The tears falling on her cheeks scattered in the wind.

Inside her heart, she was about to awaken.

Her will, corrupted by the otherworldly darkness, was surely going to turn him into the Demon King.

If that were to pass, then all hope would be lost.

The Elemental Lords would be devoured by the otherworldly darkness completely, thereby bringing about the end of the world.

—That absolutely cannot be allowed to happen.

Before dawn while the moon was still about—

Kamito's team was summoned to the ritual for gaining an audience.

After performing a ritual purification thoroughly, everyone changed into brand new uniforms.

The Academy's uniform was a simplified version of spirit attire. As ritual attire, its class was not particularly high, but wearing the combat outfits used in the Blade Dance in the meeting ritual had already become customary.

Led by the five Queens, Kamito's group arrived before the door in the Grand Shrine's depths.

Connected to the alternate dimension—the door of the Endless Corridor.

Probably nervous, none of them spoke.

(...That door is exactly the same as what I remember from three years ago.)

Kamito muttered to himself mentally.

"—Please pass through this door and walk forward. However, do not take any detours off the path and do not turn back. Otherwise, you will end up wandering the Endless Corridor forever."

After nodding to the Queens, Kamito's group stepped through the door.

Walking nonstop along this Endless Corridor that confused one's sense of distance...

They arrived before the gates of the throne room.

Kamito halted in his steps.

"Yes, this is an isolated alternate dimension. No one can eavesdrop."

Liberating the Elemental Lords from the otherworldly darkness that was beyond this world.

However, things were not that simple.

Rubia Elstein had planned to use the Demon King's power to destroy the Elemental Lords together with the darkness.

However, once the Elemental Lords were destroyed, Astral Zero and even the human realm were going to suffer a devastating blow.

That sort of method could not be accepted no matter what.

Furthermore, if Kamito relied on the Demon King's power—

(...The contaminated her was going to summon that darkness to the world, right?)

Hence, it was necessary to liberate the Elemental Lords without using the Demon King's power.

Whether she was able to awaken the Elemental Lords' remaining sanity—

Shall determine their success.

A risky plan as though walking on thin ice.

Upon failure, more lives were going to be lost in addition to Kamito's.

"Final check. Is it really okay?"

"—Don't make me repeat myself, Kamito."

"Knights do not go back on a made decision."

"My decision is already made."

"I also believe in you, Kamito-kun."

—I am your sword, your will is my command.

—Kamito, our fates are as one.

Held in his hands, the dual swords replied.

With a forceful nod, Kamito opened the gate to the throne room.

The thrones at the top were surrounded by dazzling light and impossible to see.

Freeing all the Elemental Lords would not be realistic.

(—The target is the Fire Elemental Lord, Volcanicus.)

Despite being in a state of suspended activity currently, he was actually the Elemental Lord who was corrupted the most by the darkness.

Should his madness flare up again, Volcanicus would most likely demand Claire as a sacrifice again.

Invisible blades concealed in their hearts.

At the altar midway along the stairs, Kamito's group knelt down.

—Quite an outstanding blade dance from you all.

—We shall bestow an otherworldly miracle to reward your most excellent offerings.

—What do you desire?

Then he repeated the same Wish from three years ago.

"—We wish for the death of the Elemental Lords."

Darkness surged out from the bright light at the thrones.

Unlike the comforting darkness of night—

This was an otherworldly darkness that was not supposed to exist in this world.

"That is the elemental lords' Wish—!"

Claire's terrified moan leaked out of her throat.

A large amount of darkness flowed out from the thrones, slowly immersing the stairs like flowing blood.

"—It's begun. The Elemental Lords' assassination!"

Yelling at the same time, Kamito formed elemental waffen in his hands and climbed the massive staircase all at once.

During the few seconds when the Elemental Lords' miracle was correcting the paradox of their own deaths...

They had to seize this chance to end everything—!

"Come on out, the beast of the freezing fangs of ice—Fenrir!"

Behind him, Rinslet summoned Fenrir.

No. What came out was not only a blizzard.

"Elemental Lords! If your minds still remain, listen to my voice—!"

The howling blizzard blew and scattered that hair, the color of shimmering water—

The darkness spilling out stopped for an instant.

Was it because Iseria's voice reached the sliver of rationality remaining in the Elemental Lords—?

The Demon Slayer and the Vorpal Sword.

Wielding the dual swords of light and darkness, Kamito took a leap.

The thrones were covered by the horrendous otherworldly darkness.

A burning flame was there. Kamito definitely saw it.

Sweeping away the surging darkness, he ran in one breath.

Shining with silver-white brilliance, the Demon Slayer sliced through the darkness occupying the throne.

The sacred sword's blade, pierced the fire burning in the darkness—

Just at this moment, the voice came.

Tempting Kamito to awaken as the Demon King, her voice.

Against his will, his body froze in posture with the Demon Slayer still extended.

Unable to move. It was as though the words sounding in his head were binding him.

The silver-white blade for freeing the Elemental Lord still had not reached its target.

—O Demon King... Go on and release the true darkness—

In the next instant, Kamito's consciousness was swallowed by the otherworldly darkness.

Eternal darkness without any boundaries.

Even the Demon Slayer's brightness had instantly disappeared.

(...Is this inside my consciousness? Or perhaps—)

His body was falling without end. Impossible to resist.

Even that kind of question was disappearing like smoke.

His mind was being eroded. Even thought was about to be abandoned.

Before that, in the depths of the darkness—

His entire body trembled in fear.

Inside this darkness that was not supposed to exist in this world, something was restless.

Neither spirit nor human.

That name suddenly appeared in his mind.

A fairy tale existence that did not exist in this world.

(That's the true form of the despair that Rubia saw...)

The worst prediction flashed through his mind.

(...If those things entered Astral Zero—)

The world was going to end.

He heard a voice.

This was not the voice of the contaminated Ren Ashdoll.

The owner of the voice was smiling in front of Kamito's eyes.

The demon sword he was gripping in his left hand had disappeared without him noticing.

She spread both arms—

And embraced Kamito who had been falling nonstop.

As he regained his senses—

Kamito found himself standing before the Elemental Lords' thrones.

Before his eyes was Restia's face, smiling as though in a dream.

Her lovely lips were trembling lightly.

"Miss Sacred Sword. I apologize. For pushing this mission on you."

The Demon Slayer was giving off dazzling brilliance.

"Once Ren Ashdoll's will is destroyed, you will no longer become the Demon King. Hence, I hoped to be killed the instant her will took over me."

From the very start—

From the very start, she had already decided to do this, right?

By her own efforts alone. Personally sending Ren Ashdoll's will to the grave.

Fingers trembling, she released the hilt of the sword stabbed inside her body. 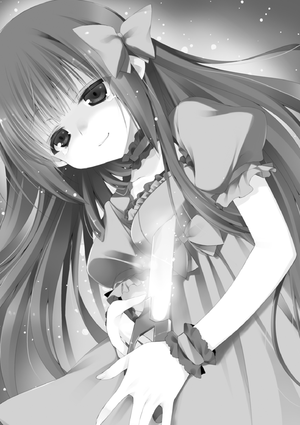 Tears streamed down her cheeks.

At the same moment when the Demon Slayer lost its brightness...

The figure of the darkness spirit girl vanished.