Opening his eyes, Kamito found himself lying in bed again.

It was not Rinslet's room this time.

There were large bookcases and shelves of medicine; this should be the health center of the academy.

It looked like he couldn't shoulder the burden of elemental waffe and passed out, again.

After all, he was still in a physical condition where he had to lie down and rest, so it was no wonder that he collapsed when performing a blade dance in such a state.

Kamito smiled bitterly at the wrist wrapped in bandages.

To have a blank period of three-years is too much for an elementalist.

Kamito was about to slowly get up from bed—

A voice could be heard from somewhere.

Looking around, he couldn't see anyone.

Then something wiggled inside the bed sheets.

Kamito quickly pulled up the sheets.

Inside, there is the naked sword spirit.

"Sleeping with you." Est replied with a deadpan look.

"Because I am your contracted spirit."

There's no use. She is not the type you could communicate with easily.

Kamito held his head that started aching little by little.

Just at that time. *Tramp*- suddenly the door opened.

"Kamito, have you woken up—"

Claire stiffened as she came inside the room.

But with a naked girl only in knee-socks on top of him, whatever explanations given were futile.

"You are in the way, sword spirit. I am going to turn this guy into charcoal cinders. Please move aside!"

"No, I am Kamito's contracted spirit. To protect him is my duty."

"Sword ... sword spirit, listen! Kamito... Kamito is my slave spirit, so you as his contracted spirit, are in my possession as well."

As Kamito struggled for words, other sounds could be heard from the corridor.

"Milady if you don't hurry, Miss Claire will be the first!"

"Being the first or not, for me, doesn't mean—" 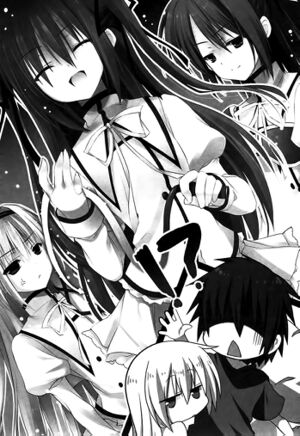 "I ... I'm just here to express our gratitude to Kamito on behalf of the Sylphid Knights. There is absolutely no other meaning!"

The three princesses opened the door as they had their conversation.

Then- all witnessed Est on the bed at the same time.

Last, an inexplicable frying pan was in Carol's hand out of nowhere.

"Kamito, what last words do you have to say?"

The flame whip mercilessly lashed down on Kamito's head.

The grand feast for elementalists—Blade Dance would be held in two months.