Several weeks had gone by after their return to the Academy.

Kamito and his friends were busy between academics, Blade Dance training and school tournament matches.

Although written exams were a major challenge for him, Kamito managed to earn his credits thanks to Claire's study sessions and Rubia's special tutoring.

Rubia's lectures were well regarded and the classroom was packed with people every lesson. After all, as a former Queen, she taught in a very clear and organized way that was also easy to understand, quite similar to Claire.

As for Leonora, she stayed for a while as an instructor. After infecting her princess maiden fans with the habit of not wearing underwear, she returned to her home country of Dracunia.

From what Kamito heard, her dressing habit of going commando had become very popular among students recently, causing a giant headache for Ellis in her efforts to uphold public morals.

More troubling for her was that even the rigid and stubborn Velsaria had stopped wearing underwear too. Velsaria and Leonora apparently got along well, and presumably got infected by the habit after spending too much time together.

"I really look foward to battles at the Blade Dance."

Leaving these words, Leonora left the Academy. Although Kamito had won all three training matches during her time here, he expected her to become even stronger half a year later.

...In this manner, Kamito was busy every day at the Academy.

One evening, after lessons, Kamito returned to the dormitory and lay himself down on the bed.

Resting Est and Restia against the wall, he plunged into deep thought.

(...Those fighting days feel like they were so long ago.)

Looking at the ceiling, blackened from coal smoke, he muttered to himself.

He had experienced so many things since coming to the Academy.

Encountering Claire, forming a contract with Est. Forming Team Scarlet together with Claire, Ellis, Fianna and Rinslet, his four companions, to enter the Blade Dance.

At Ragna Ys, he had encountered powerful rivals like Shao and Leonora, and fought them. At the final round, he finally fought and defeated Rubia decisively, but lost Restia and the shrine of the Elemental Lords.

After that, Kamito had lost his memory temporarily, got caught up in the Ordesia coup d'etat, visited Dracunia, the Theocracy, the Demon King City, and retook the imperial capital.

Finally, he had defeated the Holy Lord, who was planning to remake the world, thus saving the continent.

Just as he was deep in contemplation—

The room door was gently opened.

The one who pushed the door open was Claire. Presumably, she had bathed at the bathing facility after training before coming back to the dorm.

She entered the room and sat down next to Kamito.

Under the setting sun, her pale neck gained a faint shade of red.

"...Time went by so quickly. The battle at Ragna Ys was already weeks ago."

Kamito nodded. The current peaceful life at the Academy felt like a dream.

...After that, Claire fell silent for a while.

The setting sun sank into the Academy town. The room began to darken.

Kamito was just about to activate a spirit crystal for lighting.

Just then, Claire grabbed Kamito's arm and stopped him.

Claire blushed while she fidgeted with her fingers.

"Th-Think about it, isn't today that day? It's too embarrassing if there's too much light..."

Saying that, Claire bit her lip hard. Kamito could not help but feel his heart start to race.

"R-Really? But the sky is already dark."

Kamito gasped. No sooner had he spoken a few words than Claire put a finger lightly on his lips.

"K-Keep this secret from the others. There's nothing wrong with starting the ritual early—"

The ritual—meant the Darkness Kagura.

Indeed, the Darkness Elemental Lord was gone from the world, but her power still remained inside Kamito.

Although Kamito was not going to go berserk and turn into the Demon King, the limitless divine power of darkness residing in him still posed a problem if it had nowhere to go.

At this rate, he might unintentionally unleash divine power of darkness when encountering powerful opponents at the Blade Dance half a year later.

Hence, until Kamito gained mastery over his power, he still needed the Darkness Kagura ritual to be performed every few days.

The ritual taking place in the Raven Class dorm at night had given rise to many rumors. The students apparently called it the Blade Dance of the Night held by the Demon King.

...There was just no helping Kamito's reputation.

Claire kissed him on the cheek.

It was a shy kiss with inexperienced movements.

Blushing to her ears, Claire spoke with displeasure.

Darkness Kagura required one to give over his body with complete trust in the princess maiden, otherwise it would not work.

With close physical contact, he could hear Claire's breathing faintly. There were even the sensation of a small bulge against this arm.

"Claire, we agreed not to steal a march on any of us!"

The door was opened forcefully.

"My goodness, I cannot let down my guard at all. And it is only early evening."

"You broke the agreement."

"Yes, how underhanded to keep him all to yourself."

"D-Didn't you still have lessons?"

"Fufu, do not underestimate a princess maiden's intuition."

"We agreed to perform the Darkness Kagura ritual together, though most of the time, it just happens."

Claire's face was bright red. She turned her head to one side.

"Fufu, thank you for waiting, Kamito-kun♪"

Saying that, Fianna removed her shoes and climbed onto the bed.

"You can relax your body."

"Th-There is no nothing to be shy about."

Ellis and Rinslet came on to the bed too.

"Kamito-kun, I am not wearing panties right now."

Smiling quietly, Fianna gently lifted the hem of her skirt.

"Y-Your Highness! As the princess of the nation, how can you be so unbecoming—"

"See, isn't this the popular trend among girls recently? Also, this allows me to fully experience Kamito-kun's divine power with my skin—"

Kamito could not stop his gaze from descending upon Fianna's skirt, only to see her rubbing her knees shyly.

...Is she really not wearing anything there!?

Jet-black feathers drifted lightly onto the bed no sooner than she had spoken.

Kamito looked up, only to see the girl in the one-piece dress of darkness landing on the bed.

"Y-You are a spirit, this ritual has nothing to do with you!"

"Dear me, it is the contrary. Need I remind you that I can suppress the power of darkness?"

"What are you planning, darkness spirit?"

Just then, the Demon Slayer leaning against the wall glowed and turned into Est's form.

Est sat down on Kamito's lap. The bed was instantly packed full of girls.

"Kamito, sorry my chest bumped into...!"

"Fufu, it's not easy being the Demon King of the Night. With so many concubines, what are you going to do?"

...She was totally enjoying herself.

"Worry not. I have come up with a good solution for Kamito-kun♪"

"All we need to do is win the Blade Dance and set up a polygamous harem kingdom."

...What crazy idea was the princess proposing now?

"A harem kingdom, you say?"

"Yes. Although the Elemental Lords have lost the power to grant all wishes, the various nations on the continent will provide rewards on their behalf, right? After all, there already exists countries where polygamy is accepted, such as the Theocracy, and coincidentally, there is a suitable territory in Ordesia that is suitable for building a new nation."

Currently, Elstein territory was governed by a representative sent from the imperial capital. But after it was rendered a wasteland by the destruction wrought by the Fire Elemental Lord, all that remained were things like hot springs.

Asking for it as a victory prize for the Blade Dance would not be too much.

"I-I can't believe you came up with such a good idea."

"Indeed, that is the most peaceful solution."

"Kamito, what does harem mean?"

"Wait! First of all, will that kind of wish be accepted!?"

The Blade Dance involved sacred ritual kagura offered to spirits as an offering.

Kamito did not think that the Elemental Lords would approve of such a crazy wish.

"...You might have a point. Hold on a moment, allow me to ask Iseria-sama."

"She gave the okay!"

Then Rinslet raised her thumb with inexplicable excitement.

"Now that we have obtained permission from the Elemental Lords, how about we call it the Paradise of the Demon King of the Night?"

When Fianna cheerfully made her suggestion, Kamito could not help but rebuke.

"But if you are going to establish a harem kingdom, who will you choose as the first consort?"

The girls instantly exchanged looks with one another, with Kamito caught in the middle.

"Indeed, I can accept the role of lover."

"I hope for equal treatment for everyone."

"Y-Yes, to be honest, being first would be best, of course... B-But I'm fine with being the same as everyone else."

"Kamito, I am your sword, your wish is my command—"

After they all expressed their hopes, the young ladies' discussion reached a climax.

"A-Anyway! It is decided, we must seize victory at the Blade Dance!"

Ignoring Kamito's own wishes, the young ladies immersed themselves into the topic of building a harem kingdom.

Just then, while Kamito was watching the girls, next to his ear...

"—Are you happy right now?"

Hearing the question, Kamito was surprised.

—Happy. Back during his Instructional School days, he probably would have answered he did not know.

After all, that word was completely foreign to his life back then.

But nowadays, he was surrounded by precious companions.

Est and Restia, they were all here.

After difficult battles, he had succeeded in protecting every one of them.

He had protected the everyday life here that was irreplaceable.

Hence, to answer that question...

—In the past, there was a boy bearing the title of the "Strongest Blade Dancer."

The story beginning from his encounter with a sword, the Academy, and the hell cat girl, came to an end here.

However, the story of spirits and elementalists would probably persist into the future.

The Demon King and the princess maidens would continue to deliver blade dances of elementalists. 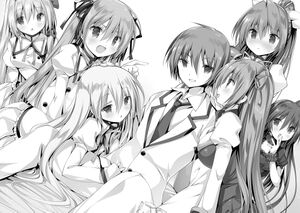