Velsaria Eva's body was being ruined by the Cursed Armament Seal.

Although they could erase the Cursed Armament Seal engraved on her 'heart' with the power of the Demon SlayerDemon King Killing Sacred Sword —Terminus Est—, the curse, which had accumulated over several years and blasted out in one go, had destroyed her channel that ruled over the renewal of her divine power.

It was unknown how many years it would take for her to come back as an elementalist.

Also, even if Cursed Armament Seal disappeared, it did not mean her crimes would disappear.

Ellis and Kamito sent off Velsaria, who was escorted by Spirit Knights to be transported to the capital, to the front of the academy gate.

Getting on the escort carriage, Velsaria had been making a peaceful expression.

Due to the fact that she implanted the Cursed Armament Seal, it might be that her mind had also been slightly ruined.

She was currently not a beautiful knight of ice, but she seemed somewhat like a normal girl.

Velsaria turned towards Ellis and lowered her head.

"Please raise your head, esteemed sister. I will always be waiting for you."

"I will leave my younger sister in your care. She is clumsy, but she is, surprisingly, cute sometimes."

"Ka-Kamito!? Esteemed sister, what are you even saying?!"

"Ellis, I am looking forward to your efforts at the Blade Dance."

Patting Ellis lightly on the head, Velsaria got onto the carriage.

Kamito stood in line with Ellis and sent off the leaving carriage.

"—Kamito, thank you. You helped me save my esteemed sister."

"The one who saved her was you, Ellis. Not me."

"Erm, Kamito, about the day before yesterday, the Valentia Holy Festival."

Ellis took out a small box from somewhere.

It was a box prettily wrapped with a ribbon.

"Th-This is only because I have approved you as a comrade of the Knights. Other than that, th-there's not even a shred of any other intentions!"

Ellis sharply turned her face away and handed her chocolate out.

"Ha ha, thank you Ellis. You're really a person with a stiff sense of obligation."

Ellis pouted her lips and mumbled,

Several days later, a party for Team Scarlet's selection to participate in the Blade Dance was held.

By defeating the first ranked Silent Fortress, their ranking went up to the third place in one go.

Similarly moving up the rankings, the upperclassman veteran Team Wyvern and together with Team Cernunnos that had the Druid girl were selected to participate in the Blade Dance.

The departure of the ship that would head to the venue in Astral Zero was one week later.

The party was held in Claire's room.

A gigantic chocolate cake was sitting on the table.

It was almost like the size of a wedding cake.

"You girls... Are you seriously eating this whole thing?"

Kamito groaned with a deadpan look.

"We don't have a choice. We had a lot of chocolate for the Valentia Holy Festival left over, after all."

"Kamito-san, a-are you saying that you are not going to eat my cake?"

Rinslet frowned with an unhappy look.

"You made this? ...You really are a high-spec young lady."

"Milady is top-notch even compared to pastry shops."

Carol smiled, placing her hand at her mouth

"Yes, I am in bliss eating Milady's cakes everyday."

"Hum, Carol, you also have to work a little."

...The other party was the never-changing low-spec maid.

Mugyuu. The sensation of soft breasts was pressed onto him.

It was the immodest second princess.

The instant he heard Fianna helped, Kamito only felt a bad premonition.

She whispered, mixed with her breath, at his ear. Kamito turned bright red.

"Est, are you saying it, knowing what it means?!"

"Wait, Claire! This is a misunderstanding!"

At that moment, the doorbell rang.

Kamito went towards the door like he was escaping in a fluster.

As he opened the door— his eyes widened.

The one standing there was—

Ellis wearing a party dress that had an opening at the region of her large breasts. 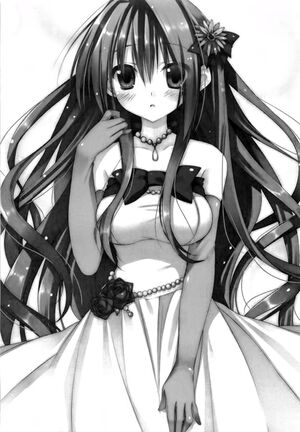 Her face was applied with light make-up and her lips were colored red.

"Be-Because it is a party, I came with the proper attire."

Two girls were giggling behind Ellis, whose face was dyed red.

They were Rakka and Reishia. ...It seemed like she was tricked by those two again.

Ellis was asking with her cheeks slightly dyed red and an upward glance.

Kamito scratched his head as he replied—

He felt dreadful glares from behind.

As he turned around, the young ladies were glaring at Kamito with "Grrr" faces.

Claire stabbed the cake with a fork and stuffed it into his mouth.

Fianna, Rinslet... and even Est—

They went on forcefully stuffing cake into his mouth.

While Kamito was surrounded by morose beautiful girls, he sighed a heavy breath.