...So it goes. Sorry for making everyone wait for so long. I hereby present to you the 14th volume of Seirei Tsukai no Blade Dance, "Upheaval in the Imperial Capital"!

First, let me apologize. Due to various reasons on the production side, it took an entire year before another installment of this series could be released. I offer my sincere apologies to everyone who had to wait so long. The story is gradually reaching a climax, but the series will keep going. I hope my dear readers will continue to support the series.

Second of all, there was a sudden announcement. Sakura Hanpen-sensei, who had been serving as the illustrator for this series, had to resign due to health reasons. I am terribly sorry for everyone who looked forward to Sakura Hanpen-sensei's drawings. Likewise, I am equally disappointed but this was the only conclusion after a discussion with the editorial department. Although it's a bit disorienting, I hope you can accept this outcome, dear readers.

Seirei Tsukai no Blade Dance is a series I built together with Sakura Hanpen-sensei. I am deeply grateful to Sensei for giving Kamito, Claire, Est and everyone else such splendid and adorable designs, as well as producing such beautiful illustrations every time. This series developing into such a big series is partially due to Sakura Hanpen-sensei's credit. Touring bookshops, attending events and holding an autograph session at Taiwan, these are all precious memories I share with Sensei. Thank you very much for the past four years.

Likewise, I am very grateful to Umeda Kano-sensei, who draws very cute super-deformed characters. Every time, I am very happy to see your illustrations.

Taking over illustrations, we have Nimura Yuuji-sensei who is currently active as the illustrator for Leviathan of the Covenant. The reason we selected Sensei out of many candidates was because we prioritized Nimura-sensei's ability to bring out the characters' charm to the max. As for the result—I'm sure everyone has seen it already. From here on, I will continue to work hard in a new system with Nimura-sensei and the manga adaptation's Hyouju Issei-sensei. Please continue to support us, dear readers.

Hyouju Issei-sensei's manga adaptation is currently serializing in Comic Alive with great critical acclaim, reaching the fourth volume. The manga version not only reproduces scenes from the original story in high quality but also draws out depths in psychological descriptions and plot that surpasses the original. I highly recommend it. If you find a chance, please check it out.

—Also, also, although it's almost a year ago, I still have to say this. The anime adaptation of Blade Dance aired. Did everyone watch it? Personally, I loved the anime a lot and rewatched it over and over again, who knows how many times. I have to say that the heroines are all very cute. Kamito is very cool and the original story's atmosphere has been recreated accurately. Director Yanagisawa Tetsuya-sama, scriptwriter Yoshimura Takao-sama, and everyone in the staff, I hereby express my deep gratitude. The anime's blu-rays and DVDs come with many goodies including special short stories, mini-OVAs, audio commentary tracks, character song CDs, TRPGs etc, so please don't miss out. Especially the character songs, they're really awesome.

Most important of all, that finale blade dance scene was definitely the most unforgettable memory in my life. From the bottom of my heart, I felt really glad that I wrote this story. It's truly wonderful that the members of Team Scarlet could be brought to life by the performances of the voice actors.

Over the past year, I've received encouragement and support from many people. Those of you who sent letters, those who filled out the comment section in surveys, readers who waited patiently, I cannot express my gratitude to all of you enough. Speaking of surveys, Rinslet-san's popularity exploded in Volume 13. Although Est still held onto first place, she surpassed Restia to take second. 4th was Claire while Kamito rose to 5th. Although Rinslet-san doesn't appear much in this volume, she will be back in Volume 15, so please don't worry. Also, who on earth is the mysterious enemy who appeared at the end? You must be very curious, right? (The hint is in Volume 8).

—Thus, let us meet again for the tumultuous installment that comes next, Volume 15, "The Dragon King of Dracunia" (tentative). Yay! 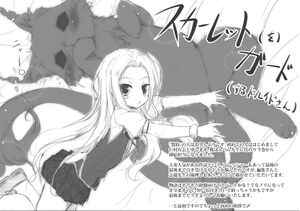 Hello again to readers of Leviathan of the Covenant. Nice to meet you to many other readers.

I am Nimura Yuuji and starting this volume, I will be taking Sakura Hanpen-sensei's place to illustrate this series.

I felt a lot of pressure because I heard this was a very popular series, so until the very end, I was still hesitating whether to accept the job or not. But it's only because the editor and Shimizu-sensei gave me a push from behind that I am now serving as this work's illustrator.

The story seems like it might be entering a spurt to head into its final arc? Now that I've introduced myself, let's treat each other well even though our time together might be short.

...Since this is the first time, I'm wrapping up with slightly more formal greetings.