—Nii-sama is Muir's only.

And so, it has been three months since last time. This is Shimizu Yuu.

Finally, after two months of school life, it's the Blade Dance. Attacking Kamito and the others who have made their respective resolves is a military-use spirit of unknown affiliation. The covert Instructional School's assassins and Kamito's revealed past. And also the other Ren Ashbell's objective is—

The young ladies' love battle also accelerates with bold swimsuits and magnificent dresses, while the plot advances into the climax, so please continue to support it!

Now for the customary thanks.

Thanks to MFJ's charismatic incubator, "Seirei Tsukai" has managed to reach four volumes.

Head editor Misaka, proofreading team, formatting team, marketing team and bookstores, thank you for everything. Shinjuku's Anibro Gamers store have made a huge released of volume 3. Once again, I thank you.

Lastly, to all those who are reading this book, I give you my greatest thanks!

To everyone who submitted their impressions in the questionnaire, a big thanks to you as well. I have read all of them gratefully. Speaking of the questionnaires, in the second volume, Est was leading by a large margin, but in the third volume, she just rocketed to the top. Fianna and Claire occupy the third and fourth spots in a very close battle. The main character, Kamito, is in fifth. It's a shame that the cute Rinslet is in sixth......now is the time for the one million (lie) Rinslet fans across the country to unite!

Now then, the next volume is the fifth. Let's meet again in "The Demon Slaying Sword (tentative)"! 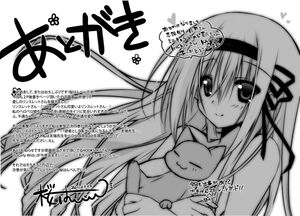 Nice to meet you or long time no see! It's Sakura Hanpen!

I received another two page afterword so I drew my beloved Rinslet with all my heart!

This is my pero-pero desire. The tights on the cover page were at too high a level.

I-It's not like it not satisfactory!? But it could be more cute.

With that shocking ending, it can't be helped if I want to read the next volume.

Oh no, what's gonna happen to Est...!? The readers are really interested...Shimizu-sensei...

No matter what happens, I won't apologize about my pero-pero, so please apologize, Shimizu-sensei. Ehh.

Also, this is an announcement but the one who left me in charge of illustrations, HOOKSOFT-san's "SuGirly Wish" is coming out next (`･ω･´). Please look into that as well...!

Well then, I'll stop around here!

This has been the Sakura Hanpen who can't help being curious about the next volume!