—I offer this to you, the blade dance of Ren Ashbell, Strongest Blade Dancer!

Shimizu here. Thanks for waiting, everyone.

I hereby present to you "True Force", the final volume of Seirei Tsukai no Blade Dance!

To stop the Holy Lord's plan to destroy the world, Kamito and company had gone to Astral Zero with the Queens accompanying them. However, the revived sacred sword had destroyed Ragna Ys and scattered the members of Team Scarlet. In front of Kamito, who was being devoured by the power of darkness, a girl claiming to be Ren Ashdoll appeared—

Thus, the story reached the final volume at last. I wonder if everyone enjoyed the ride fully? While I was writing the final volume, I felt conflicted at times because there was so much content I wanted to put into the book. Luckily, in the end, I still managed to complete the good ending that I envisioned in my mind.

...Oh dear, come to think of it, it's really been a long period of time. Starting from the first volume sold towards the end of 2010, the series has continued until now, fully eight years in total. Wow, it surely makes me emotional.

Having experienced the creation of twenty books, my love for the characters has grown deep. To be honest, there were times when I didn't want to end it. There were things I still wanted to write about. But even though the novel did not describe it, Kamito and Claire have a long life ahead of them, and would continue to live energetically in that world of theirs. Having finished writing the final volume, this is what I think. I wonder how many concubines the harem kingdom will have in the end (at least twelve of them, right!?) By the way, inspiration for the subtitle "True Force" came from the anime adaptation's opening theme sung by Harada Hitomi-san. This is Est and Kamito's song, as well as Restia and Ren Ashbell's song. I hope everyone can listen to the song again after reading the final volume. I wonder if it will bring new thoughts to you.

And so, even though the rate of publication fell in the middle and made everyone worry, this series successfully came to its conclusion at last. It's all thanks to your support, dear readers. At the same time, these eight years have left me with many precious memories.

The autograph session with readers, the event in Taiwan (I had so much fun, an unforgettable experience of a lifetime. Thank you for your support, fans in Taiwan!), Hyouju Issei-sensei's godly manga, and the anime adaptation that came out four years ago, every week's script meeting was extremely exciting. And events of the anime's voice actress unit "Kneesocks" were super amazing. The final scene's blade dance still leaves me with a vivid impression (too bad I don't have enough pages to continue with my thoughts!) Also, there was the drama CD that came out last year, produced by the anime's original staff. Although I was the one who wrote the script, the voice actors really blew me away with their awesome acting skills, making me understand what professional skills truly meant. I really have to thank everyone for giving me all kinds of valuable experiences!

It's hard not to feel a little sad about the series' conclusion, but right now, my heart is filled with gratification.

Finally, let me thank everyone would took part in the production of Seirei Tsukai no Blade Dance.

Sakura Hanpen-sensei, who created so many cute characters, Umeda Natsuno-sensei, who was in charge of the SD character illustrations, Nimura Yuuji-sensei who took over illustrations later on, and Shimesaba Kohada-sensei who crossed the finish line at the end, I am extremely grateful to all of you. Thanks to you, Seirei Tsukai no Blade Dance was able to reach a perfect conclusion.

Once again, let me thank the anime's Director Yanagisawa Tetsuya, Yoshioka Takao-sama, Fujii Maki-sama, Kawai-sama, Hatayama-sama, all staff at TNK, Producer Tanaka-sama, and all the animators who poured life into the characters. Then there is Kashiwagi-sama and Yonezou-sensei of Connect Hearts that produced the drama CD.

Next is the series' benefactor, Shouji-sama, Narita-sama, Sukawa-sama, Nakamichi-sama, and generations of editors, proofreaders, designers, sales and marketing, I sincerely offer my gratitude to everyone who took part in the series' work!

Finally, I have to really really thank all the readers who supported this series that lasted as long as twenty volumes! I will treasure for a lifetime the reader letters and the surveys you mailed to me!

Let me take this opportunity advertise a little here. I am currently working on stories for Ichihara Kazuma-sensei's 'After School Bitchcraft which is serialized in the monthly Comic Alive magazine, as well as Aogiri Makoto-sensei's 'Iseikai Munchkin which is serialized in the web magazine Wednesday's Sirius. Like the final volume of Blade Dance, the first volume of After School Bitchcraft will be available for sale in March. I hope for support from everyone!

Also, the drama CD of Seirei Tsukai no Blade Dance is on sale with great reviews. The first limited edition discs will come with a werewolf card game (illustrated by Yonezou-sensei), likewise I hope everyone can check it out!

Also, also, I am currently writing in preparation for a new series to be published at MF Bunko J. I will work my hardest to bring the new book to everyone as soon as possible, so please look forward to it.

—Well then, see you next time with my new series! 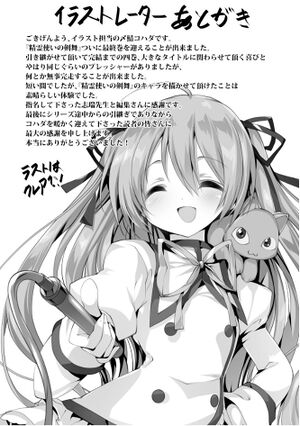 Throughout these four volumes, stepping in mid-series and going until the end, I've felt excited about working on a major intellectual property.

Although I also faced a corresponding amount of pressure, in the end, things worked out and I passed the finish line safely.

Though it was not for long, illustrating for Seirei Tsukai no Blade Dance really was a very wonderful experience.

I thank Shimizu-sensei and the editor for choosing me.

Finally, I must deeply thank all the readers who gave their kind blessings to Kohada who took over mid-series. Thank you so much for everyone's support!