Chapter 8 - The Temptation of Darkness[edit]

"If I wasn't here anymore, what would you do, Est?"

Unlike humans who returned to the soil, spirits had no life span. No matter how strong a bond was with a contracted spirit, one would always have to part with them.

"If I'm not here anymore, you have to make sure to find a new elementalist to contract with, okay, Est."

The ever-docile sword spirit disagreed with her master for the first time.

"I am your sword. I will not become anyone else's."

"Master, why are you asking such a thing?"

She put on a troubled expression.

Everything about what her destiny would lead to in the nearby future — a face that knew all of this.

And thus the Sacred Maiden and legendary sword went to meet the end of the story.

After several years of wars, the sacred girl Areishia launched an attack on the Demon King's castle.

Defeating scores of enemies, the pure girl's hand was already soaked in blood, but still she did not lose hope.

—That after this battle would be a world of peace.

While knowing the fate of her body, she continued to fight.

The voice of the girl rang through the castle's banquet hall.

The strongest holy sword gripped in both her hands gave off dazzling light.

Pushing back the darkness, the girl ran while aiming for the Demon King's heart.

Everything happened in an instant.

The holy sword shone and burst the Demon King's heart with a flash.

Giving off a dying cry of agony, the Demon King was vanquished from this world.

Basked in the demon king's black blood, the girl collapsed to the ground.

In order to calm the worried Est, she patted her head.

Though Est maintained an expressionless face, she turned her head with slightly reddened cheeks.

This was the first time since she had met her that Est had shown such a reaction.

The girl was happy with that.

For the girl that had gradually killed off her human emotions in line with the peoples' expectations of her as the Sacred Queen, this was her sole comfort.

In the next instant, the girl fingers made a stiff sound and shattered.

While having his shoulders shaken, Kamito awoke.

A nice scent drifted near his nose. The twintails upon his cheeks tickled slightly.

"Come on, the meal is ready. Wake up already."

"It will get cold if you don't get up quickly."

Kamito rubbed his eyes and lifted his upper half from the hard ground.

The sun had already begun to set when Kamito and the others finally found a camp site.

It was beside a gently flowing mountain stream. Edible fish were present and the water was suitable for purification. After making a simple tent and leaving the meal preparations to the girls, Kamito had taken a nap in preparation for being the night look-out.

Walking to the riverside where there was a table built from the trees, he found a luxurious evening meal on it.

Smoked fish from the river, seasoned risotto, and soup made with dried vegetables. These were from opening some of the many canned foods Claire had brought.

"Is it okay to eat this extravagantly from the first day?"

"Because it's the first day, delicious food is necessary to raise morale."

"Well, that does sound reasonable......and this looks seriously good."

Kamito sat down on a rock and began with the steaming risotto.

"......Insanely good! Did you really make this with canned stuff?"

Ellis seemed a little down as she sighed that.

"Ah, no, Ellis' cooking has a homemade feeling to it and I like that in its own way."

He didn't know what she was imagining but Ellis had zoned out with a red face.

"We made one nearby. Scarlet worked hard."

Scarlet who was laying beside Claire let out a nyaa.

"Fufu, it's fine to enter with Kamito-kun ♪"

"W-What are you thinking, you!"

"You're too loud! Even if we're inside a barrier, don't let your guard down!"

"Though the knight captain is being the loudest."

A little away from the camp site, the girls were undressing.

Next to them was an open air bath with dense steam.

It was not a hot spring. Having Georgios carry large rocks to isolate a section of the river, they had Scarlet release its flames there.

The light splash of someone entering the water.

Having removed their academy uniforms, the princess maidens' skins were exposed to the night moon's faint radiance.

"E-Ellis, you were wearing quite mature underwear, weren't you......"

Ellis averted her eyes in embarrassment.

"I-It's not lewd! Kamito chose them—"

Under the questioning glares, Ellis who had dug her own grave retreated.

"Claire, haven't you grown a little as well?"

"......Was it my imagination? It feels like they've grown a little since I last groped them."

"D-Don't tell me that thing of the lightning spirit from yesterday was effective......"

"What are you talking about?"

Claire sunk under the water surface and blew bubbles.

He could hear the girls' excited voices from afar.

As expected, not even Kamito with his good hearing could make out their words.

Kamito was keeping surveillance from a rock's shadow. There were also spirits that gained strength with the coming of night. And unlike the matches at the academy, one also had to be vigilant of a night attack.

Drawing a breath, he looked down at the spirit seal engraved on his right hand.

The past memories of Est he had caught a glimpse of.

The dream about Est's former master, the Sacred Queen who slew the Demon King.

Just what had Est remembered—

In the forest in front of him, a faint presence appeared.

Kamito stood up on reflex and entered a battle stance.

A barrier that let them know when a person or beast got near was supposed to have been erected.

The problem was who had managed to bypass the barrier without setting it off.

Kamito glared into the grove of trees.

Before his eyes, the swirling darkness took human form.

The one who appeared there was a beautiful girl clad in a dress the color of darkness.

Kamito widened his eyes and looked upon the girl in front of him.

The one he had always wanted to meet, an irreplaceable treasured existence.

The one that had first given light to the Kamito who had lost his heart.

But now, she was—

"How cold, even though I was worried about you."

That gesture was so dearly missed that Kamito's heart ached.

As the dress fluttered, Restia slowly walked towards him.

"It's not like you to have a hard fight against opponents of that caliber."

"Were you the one who told them I lost Est?"

Having Restia admit it so frankly felt anticlimactic.

Because of that, he didn't know what to say next.

Restia came just in front of him and gazed up at his face with her twilight-colored eyes.

It was about the same as three years ago except that Kamito was now taller.

It was magnificence that made his heart beat unconsciously.

And the sweet whisper that came from her lips.

"If you can't use your contracted spirit, you can use me."

"It's not really that surprising. I am still your contracted spirit."

The Gate had never opened even once since that day.

"That's because you didn't have the requirements, Kamito. But with your latest power that awakened — you can use me again just like before."

The elemental waffe he had used three years ago as Ren Ashbell — Vorpal Sword.

The power of that demon sword to cut everything was comparable to Terminus Est.

Without Est, winning the Blade Dance was impossible.

But if his former contracted spirit returned to him once again—

He could even win against that other Ren Ashbell.

"However, I have a condition." 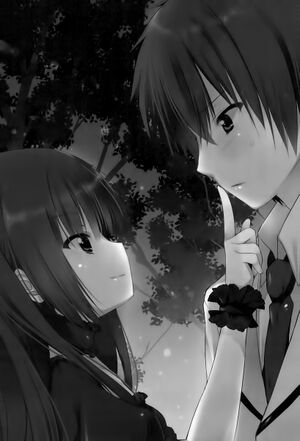 Restia put her index finger to her lips.

"Yes, you have to sever your contract with that other sword spirit."

"Did you think I wouldn't be jealous if you contracted another spirit?"

Restia whispered into his ear with a sullen tone.

And decisively shook his head.

"I believe in Est. That she will definitely return."

He had lived the past three years for the sake of getting Restia back.

The reason he had participated in this Blade Dance was for the same reason.

But he could not sever the contract with Est for that.

"But I wonder if you can defeat her without a contracted spirit."

At the same time he asked, Restia's figure faded out and started to disappear.

"I'm always waiting, Kamito. Until you call me — okay?"

Restia completely dissolved into the darkness.

The next instant, a blaze fell from the sky.

A violent flash. The resulting wind blast blew Kamito away.

The earth and sand that flew collapsed the forest's trees.

While groaning, Kamito lifted his face.

From the epicenter of the explosion, a giant black shadow stood up.

It was a jet black dragon with wings that spread as if to eclipse the moon.

The flames that blazed lit up the night.

A girl wearing a black surcoat walked out from within the dancing flames.

Her red eyes penetrated the night.

An oppressive feeling that could even be felt on one's skin.

"—As you say, Kazehaya Kamito."

Leonora said with her hand straight up in the air.

"The dragons of Dracunia hunt lions with all their strength."

The dragon spirit Nidhogg opened its mouth and released an inferno.