Under the unrelenting rain...

Kamito stabbed the Demon Slayer into a pile of collapsed debris.

However, she looked like she was still breathing. Although this move was impossible to hold back by nature, she had avoided getting struck in a vital. As a member of Numbers after all, she would not die that simply.

Kamito looked down at his own hands.

It was not hard for him to notice that the raging power surging from the depths of his body was now gradually fading like a tide.

A moment's carelessness and he would have been devoured by an impulse to destroy everything and subjugate all creation.

Just as Rubia had said, the power had been unshackled—

Suddenly feeling drained of strength, Kamito collapsed on the spot.

The runaway power of darkness had subsided. As long as they kept close physical contact, her magic probably would not get deflected.

Fianna's fingers caressed Kamito's arms gently while the light of healing promoted his recovery from fatigue. Sure enough, her power had been amplified greatly too.

At this moment, Fianna wrapped her arms around Kamito from behind.

"Sorry, let me stay like this for a while."

"No need to apologize, you idiot."

Kamito blushed. Seeing that, Fianna chuckled with a smile.

However, Kamito's guilt did not go away. Although there were pressing circumstances, he had ultimately shared the Darkness Elemental Lord's power with her.

Kamito scratched his cheek in embarrassment.

(...Judging from the way it looks currently, Fianna doesn't seem to be facing any bad effects.)

Fianna buried her face in Kamito's back.

Fianna wiped her tears on her dress hem.

Then with a look of determination...

She landed a kiss on Kamito's cheek like a light peck from a bird.

Her dusk-colored eyes were quivering.

There was not the slightest hint of mischief as per her usual pranks.

Her eyes were staring straight at Kamito sincerely.

Kamito was just about to speak when in that instant...

He felt an intense chill along his back.

Instantly, he pushed Fianna away.

In the next instant, a thrust attacked, fast as lightning—

The spurting blood dyed the ground, which was wet from the rain, red.

What the heck had happened? Kamito still had not fully digested the situation at hand.

However, an incomprehensible reality had shown up.

He had seen nothing.

Let alone the flash of a sword, he had not even detected any movement.

Also, it was a grade faster than Kamito could perform the move, no, several grades faster.

(...Impossible, I should be the only one who inherited the Absolute Blade Arts...)

"Oh? Although I didn't go all out, I never expected that move just now to miss its mark—" 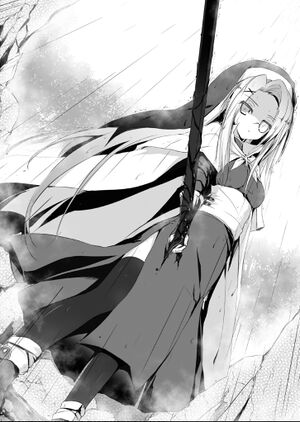