Hello everyone, I am Shimizu. Thank you very much for buying this book. Sorry for the long wait. This time, I present to everyone Volume 13 of Seirei Tsukai no Blade Dance, "Queen of Ice Blossoms"!

One week has passed since the Academy was attacked using the opportunities afforded by the Great Festival of the Spirits. Having recovered his memory, Kamito received a certain piece of news. Reportedly, a girl resembling Restia had appeared in a forest on near the Empire's borders. In order to confirm the veracity of this news, Kamito set off for Rinslet's homeland of Laurenfrost!

As a result, this volume is where the perfect well-bred lady, Rinslet, gets to shine. On further thought, she is the poor girl who never received any main plot devoted to her despite appearing on the cover of Volume 4... Finally, she gets the chance to counterattack this time. Because Rinslet is one of my favorite characters, writing this volume was quite an easy and enjoyable process!

Next comes acknowledgements. I am very thankful to Sakura Hanpen-sensei who has drawn outstanding and adorable illustrations again. How rare it is to put an animal on a light novel's cover.

Editor in charge, Sukawa-sama, sorry for causing you trouble all the time. Thank you and thank you once again.

Hyouju Issei-sensei, thank you for drawing the best comic adaptation as always. The intense battle scenes always makes me look forward to them. The third volume of the comic with Est on the cover is also selling with favorable ratings. If possible, please show your support and check it out, I highly recommend it!

Finally, the greatest thanks goes to every reader. I am really really super thankful!

Next, just to let you know about a joint offering from Hirasakayomi-sensei, Sagarasou-sensei, Suzuri-sensei and Shimizu, a GranCrest's TRPG replay titled "NEET Lord's Dragon Slaying Tales" is currently for sale under Fujimi Dragon Book. Because it is a very fun (*very outrageous) replay, all interested readers should check it out. A certain familiar spirit from this series will also make an appearance there!

Also, also, there is news about the anime adaptation that will start broadcasting in July—

Including filming, script and cast of voice actors, one could say this is a gathering of the best staff. The production is by TNK whose other works include High School DxD and this spring's Kenzen Robo Daimidaler. The director is also Yanagisawa Tetsuya the same as for those two anime series. Please look forward to the product from the strongest lineup!

—Okay, the official start to the "Spirit War Arc" will finally arrive next volume. Let's meet again with Volume 14, "Upheaval in the Imperial Capital"! 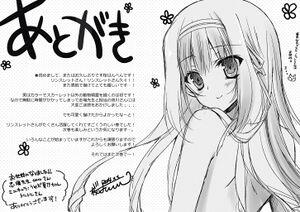 Nice to meet you, or hello again, this is Sakura Hanpen!

I'm so happy to be drawing her for the cover this time!

The truth is, other than Scarlet this is the first time I'm drawing an animal spirit!

But I'm glad I managed to draw her so cutely!

Rinslet-san really did a lot in this volume and that made me really happy!

It makes me look forward to the next volume...

Many other things have happened but I'll keep doing my best for this so treat me favorably!

Well then, see you next volume!