If ever a time comes when I am no longer myself, should that happen—

Kamito opened his eyes. The first thing to enter his view was a pure white ceiling.

Warm sunlight was streaming into the room through the curtains. The bedsheets were white and newly washed.

Why exactly was he here?

Before that, what on earth...?

...His body could not move.

The first possibility entering his mind was that something was restricting his freedom.

But on top of sleepiness, there was nothing resembling shackles. Had he been restrained by magical means, then he should not be able to lift even a finger.

(Am I this weak simply from exhaustion?)

Reaching this tentative conclusion, he surveyed the room to get a grasp on the situation.

First he saw the vase on the bedside shelf. Also, there was a large table in the middle of the room with a wardrobe placed against the wall. Although this furniture was not ornamented with exceptional luxury, it was evident at least that they were high quality and chosen with care.

Also the bed was extremely comfortable, as though his body could sink into it completely.

At least, it did not seem like a commoner's room.

Then if that were the case, why was he placed into a noble's room?

This room had a window. The door was also made of wood and easy to break.

Unlike that jail-like facility, surrounded by cold rock, this was different.

—At this moment, footsteps were heard outside the room.

The approaching steps showed no intent to conceal them.

...Judging from the situation, it was probably one person. Was it the one who had moved him to this room? Kamito had no idea what the intentions were, but if necessary, he would force the person to speak the truth.

His trained body responded naturally, by picking up something nearby to use as a weapon—The vase on the bedside shelf.

The footsteps stopped. Then came the sound of a key and the door slowly opened.

Appearing at the door was a red-haired beauty.

The instant their eyes met, the eyes of ruby suddenly widened greatly.

The water jug in her hand fell to the floor with a loud crash.

But she remained stunned, her body frozen and rooted to the spot.

Holding the vase, Kamito was a little unsure of what to do.

He never expected the one to imprison him to react like this.

"Kamito, you finally woke up."

Without any wariness at all, she rushed straight at Kamito.

Due to the unexpected action, Kamito's reactions were slowed down.

The girl spread her arms and hugged Kamito on the bed.

She suddenly began to cry loudly.

On the bed, the girl rubbed her eyes that were slightly swollen from her crying.

Kamito frowned and tilted his head.

"Yes. Everyone, everyone is so worried about you, wahhhhhhhhhh!"

Burying her face in the sheets, the girl began to cry again.

"Do I need to spell it out? Whether Ellis, Rinslet or the perverted princess, everyone."

"...Hold on. Let me ask a question before anything else."

At a loss, the girl looked up from the sheets. 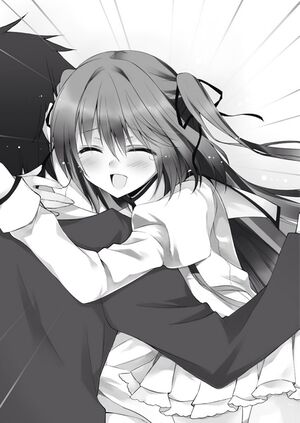