Shimizu here. To readers who are holding this book, I am truly grateful.

Let me present to you the 15th installment of Seirei Tsukai no Blade Dance, "The Dragon King of Dracunia."

Infiltrating the imperial capital to rescue Fianna, Kamito was blocked by Greyworth who had recovered her appearance as a young girl. With Kamito helpless in the face of her overwhelming power, it was at that moment when Leonora the dragon knight of Dracunia showed up—

As for acknowledgements, again, I am truly thankful to Nimura Yuuji-sensei for his magnificent illustrations. Leonora's "not wearing any" picture on the cover is really too awesome. (The bare legs version appearing on the frontispiece was due to the my insistence as the author!) There is also the illustration of the new character, the Dragon King, which truly surpassed my imagination.

Then there is Hyouju Issei-sensei's manga serialization. Every time, it is drawn to such high standards, I am honestly extremely grateful. The latest Volume 5 will be released in February so I do hope that everyone could check it out if they have a chance. The battle between Kamito and Jio Inzagi is honestly very hot-blooded.

Editor in charge, S-sama, sorry for causing trouble for you on the schedule side. Thank you so much for supporting me every time.

Now about recent events. At this stage, I've written a collaborative scenario for SEGA's smartphone game, Chain Chronicle. It comes with original characters as freebies, so interested gamers, please try it out.

As for the customary popularity poll, according to Volume 14's survey, Restia and Est occupied the number one and number two spots respectively, separated by an extremely small gap. Fianna was third. From the letters and comments in the survey responses, I can tell that everyone is reading the story very seriously. I truly cannot express my endless gratitude enough to everyone who has supported me so far.

—Well then, next comes the Theocracy episode where we will start tying up dangling plot threads.

Let us meet again with Volume 16, "The Demon King Returns in Triumph (Tentative)"! 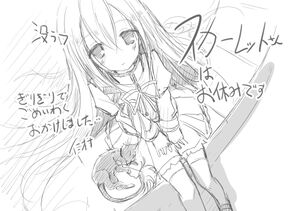 This time, Scarlet is taking a break.

Sorry for submitting things the last minute before the deadline...