---Princess maidens that serve a dragon may not wear underwear.

To all who have taken this book into their hands, truly thank you very much!

We have reached the eighth volume of "Seirei Tsukai no Blade," "The Night Before the Finale".

Having won through the Tempest admirably, Team Scarlet returns to the floating island. In preparation for the approaching finals, Kamito takes a short rest --- or so he thinks, but he ends up on a date with the strongest ace from the Knights of the Dragon Emperor, Leonora Lancaster!?

Last time and the time before that, flashy battles were happening so this time I delved into the heroines' pasts and the date with a heroine from another team. Of course, I have various things prepared for the finals which start next volume, so all of you who like battles, please look forward to it!

Thanks and now for the announcements. At present, Hyouji Yuitsusei-sensei's comic version of "Seirei Tsukai no Blade Dance" is serialized in Comic Alive's magazine. Please somehow support the invigorating battle scenes and insanely cute heroines that Hyouji-sensei draws.

Sakura Hanpen-sensei, thank you for your wonderful drawings as well. Leonora's armpits on the front cover look very good. Others that were drawn for the first time like Milla Bassett, Kamito from the past, Lolislet (← I wanted to try saying it), etc. were drawn very cutely.

To my editor Shouji-sama, I am always really relying on you. The rumored "Light Novel King ☆ Seiya" with a main character that seems to be modeled after Shouji-san is serialized in Comic Gene and is enjoying great popularity (advertisement).

Lastly, to all the readers. By receiving all your support, "Seirei Tsukai no Blade Dance" has reached its eighth volume. Sakura Hanpen-sensei, Hyouji Yuitsusei-sensei and Shouji-san, I will be going all out from here on, so I'm counting on you!

I read all the impressions from the cellphone survey carefully and I'm really happy to receive them. As usual, in the popularity rankings, Est and Restia are strong, and Kamito who appeared on the cover of the seventh volume also rose in popularity. From the team's young ladies, Ellis rose a little and after that, the rest feel average.

---With that, the ninth volume's finals will have more and more battles.

Cross Fire --- Amidst the blaze, what does Kamito see? 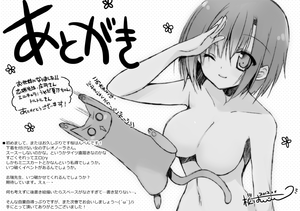 Nice to meet you, after another long period, it's Sakura Hanpen!

The girl that wears no underwear, Leonora-san.

Moreover, I wonder if wearing a miniskirt is on her preference.

When will there be a unveiling scene, I wonder.

Shimizu-sensei, when will you rip her clothes?

If I draw without thinking, there's too little space...I can't write enough...

Thank you for picking this up!