—Have you forgotten this flame, Volcanicus?

Hello again, I am Shimizu.

Kamito and his companions had returned from the Demon King City and succeeded in recapturing the Academy. After getting wounded all over in his battle against the angel, Kamito then heard Greyworth reveal the truth from twenty-four years ago. With the power of the Darkness Elemental Lord eating away at Kamito, the mystery of the holy capital's disappearance, the unexpected weakness of Rinslet-san the perfect noble young lady, and Holy Lord Alexandros' true goal is—?

Volume 19, which approaches the secret of Est's kneesocks, I hope it will meet everyone's expectations.

Recently, perhaps due to the summer heat, I've been in bad health, and caused a great deal of trouble for staff. Novelists must prioritize their health and take good care of their bodies...!

Next come acknowledgements. Once again, I am very grateful to Shimesaba Kohada-sensei who has drawn adorable illustrations. Every illustration was awesome, especially the one with Kamito and Claire standing next to each other, super amazing. Mr. Editor, I've caused a lot of trouble for you again, I thank you for taking care of me all this time. Finally, I have to thank all of you, dear readers, who have stayed with me the whole way to Volume 19. It's thanks to you all that the series was able to make it to this point...!

Almost eight years have passed since the series began. Manga and anime adaptations, autograph sessions, the Taiwan event, the performances of the Kneesocks voice actress unit, etc, so much has happened over these eight years. I had so many experiences. Volume 20 will be the final volume. I hope everyone can support the Blade Dance series to the very end!

I have also finished the script for the audio drama to be performed by the anime cast. The main theme is a reunion of Team Scarlet. I hope everyone will listen to it too!

Finally, let me advertise a little. Currently serializing in Gekkan Comic Alive to critical acclaim is the after school magecraft story "After School Witch Craft" written and drawn by Ichihara Kazuma-sensei. A fun and ecchi manga, I hope everyone could support it!

—And so, the final volume arrives next time at last.

I will work hard to bring you the best ending! 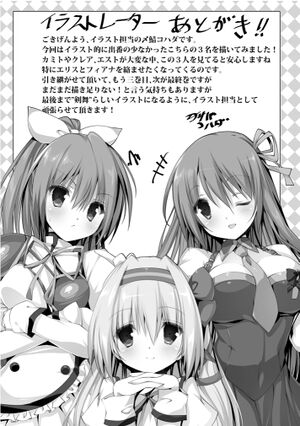 This time, I drew the three girls who appear relatively less often in the illustrations!

With Kamito, Claire and Est in trouble, seeing these three always makes me feel reassured. Especially Ellis and Fianna, I really wanna hug them.

It's been three volumes since I took over as illustrator. Although next time will be the final volume, I still have this feeling of "I still haven't drawn enough" in my heart.

As the illustrator, I will work hard to the very end to draw illustrations in Blade Dance style!