--If possible, Kamito, I wish to die by your hand.

To all readers who bought this book, I would like to express my sincere gratitude.

I hereby present the sixth installment of "Seirei Tsukai no Blade Dance," the "Reminisced Darkness Spirit"!

Due to Est's resurrection, Kamito and his team were able to defeat the formidable Knights of the Dragon Emperor. Just as they were enjoying brief respite, they received the Rupture Division's proposal for an alliance. Heading off to negotiate, Kamito and Claire were intercepted by the mysterious black knight -- as well as the contracted spirit of the past.

"This is the final opponent I've prepared for you."

The awakening of Kamito's childhood memories. The encounter with the Rupture Division -- Milla Bassett.

The Blade Dance main competition is reaching a climax, hence there is a greatly increased amount of battle scenes this time.

Also, the original preview in Volume 5 for the next subtitle was "The Strongest Blade Dancer (tentative)." Due to various reasons (*the author's carelessness), it had to be changed... I am most sorry (sweating).

No matter what, in the second story of the "Blade Dance story arc," changes will be made to my original plans. So please rest assured, everyone. Volume 7 will be attacking with great vigor in spirit!

Just to let you know. "Seirei Tsukai no Blade Dance" has also been adapted into a flash game. I, Shimizu Yuu, slacked off to play it for a bit and now I'm addicted. I really recommend it for people who likes to pop bubble wrap packaging, you really must try it.

Also, BROCCOLI-sama has produced a microfiber towel for a Blade Dance character (Claire). As the first promotion product created, I am very happy about this. That cuteness and healing feeling is really recommended.

Acknowledgements. Firstly, thanks goes to Sakura Hanpen-sensei who drew all these cute illustrations again. I am utterly grateful. Restia on the cover is truly an angel. Arranging the covers of the six published volumes side by side, I feel really happy.

Also, thanks goes to Umeda Natsuno-sensei who drew adorable SD characters. Your creations are so cute that I even felt a delusion wanting to ask as certain company whose name starts with N to produce a series of figures. Thank you for your continued support.

Shouji-san, the Sephiroth of the publishing industry (*because you're always dressed like some kind of final boss from an RPG), thank you for handling all the troubles I've brought upon you. My thanks really cannot be expressed fully in words.

And of course, my greatest thanks goes to all the readers.

Starting from the end of last year, thanks to everyone's support, this series began to go through additional reprints and now reached the sixth volume successfully.

My intention was to write about "cute beauties" x "hot-blooded battles" -- I won't forget this series' initial premise and I'll work hard towards the goal of "more love, more comedy, battles above all!" So from here onwards, I hope everyone can continue your support. Your comments in the text message survey have been the greatest encouragement. Sakura Hanpei-sensei and I are very happy to receive them!

Okay, as for the usual popularity poll, as the cover of Volume 5, Est won the number one spot with over 400 votes. Greatly surpassing all other candidates. Will the Est faction continue their dominance?

In second place we have the stern and grumbling beauty, captain of the knights, Ellis Fahrengart. She looks really cute hugging Scarlet (even though Scarlet feels very troubled). Slightly behind in number three is Rinslet the high-class Laurenfrost young lady, the perfect superwoman who excels in all maid skills including cooking. A bit of a waste for a high-class lady. In fourth place is tsundere hell cat girl Claire Rouge. For some reason, the fearless girl who is always featured in special fan service scenes. Even though she keeps wanting to turn Kamito into charcoal, she really is a very gentle girl.

In fifth place is the darkness spirit, Restia. Even though rumors are rife that she is Kamito's one and only true love and legal wife, what is the actual truth? She really looks like an angel on the Volume 6 cover.

Next in sixth is Fianna Ray Ordesia Her Highness the imperial princess. She not only holds the advantage of knowing Kamito's true identity but is also one of the more womanly members of Team Scarlet. Mature and adorable at the same time. In seventh place we have our protagonist Kazehaya Kamito. When will we be able to witness him cross-dressing? (Secretly winks at Sakura Hanpei-sensei).

In actual fact, the difference between third and sixth place is very minute (29 votes), so in this massive free-for-all, it would not be surprising for the rankings to change any time without warning. Others such as Leonora and Muir are also quite popular.

The survey can be entered by using the QR code at the end of the Afterword. Please try it if you wish to support your favorite character. Starting with this volume, we are accommodating smart phones.

As for the author's recent news, lately I've been zealously collecting sample food models. Those imitations that restaurants put out to display their menu items. The latest ones are so exquisite they make me really touched.

And so, let us meet again at the next installment, "The Strongest Blade Dancer (tentative)"!

--The author has already received notice to start writing the next draft! (Concentrated linework appears on face like special effects.) 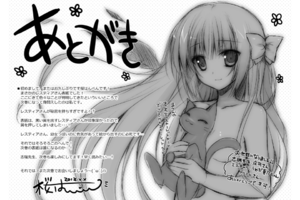 Welcome for the first time and welcome back for returning readers. This is hello from Sakura Hanpen!

I never expected it'd be a Restia cover this time!

Having progressed to Volume 6, many mysteries have started to unravel and building up towards a climax. I'm really struggling with the urge to find out what happens next.

Restia-san really has too many secrets!?

As for the cover, due to having read so many descriptions of Restia's black wings, I drew wings on her on impulse...!

In order to depict Restia's maidenly cuteness and seductive feeling, I put in everything I've got!

Well then, I guess it's about time to say bye to the readers!

Shimizu-san, I am really looking forward to the next volume! I really want to read it as soon as possible...!

So, let's meet again next volume～(＇w｀)ノシ