—Kamito and the others had fought with Valaraukar, and at that moment.

Fianna felt a strange sense of uneasiness, and went towards the heart of the abandoned city Megidoa.

Her perception at times like this was often right. She, who held unparalleled talent as a princess maiden, would never neglect her intuition.

(It’ll be good if this was just needless anxiety…)

She was running on a path covered by countless trees and shrubs in the darkness of the night, and at that moment.

Suddenly, something small came flying in front of her.

The instant she stopped her footsteps, she ended up tripping and falling over. Unfortunately, she did not happen to have the reflexes like her female teammates.

While she rubbed her twisted foot, she looked up and—

What was there was Claire’s hell cat spirit.

She noticed that it somewhat seemed smaller than usual.

“…Why are you here? Could it be that Claire is near here?”

However, Scarlet turned around, and instantly disappeared into the rows of ruins.

Fianna stood up in a fluster.

Her twisted foot hurt, but now wasn’t the time for that.

Finally, she might have discovered the whereabouts of her teammates.

Chasing after Scarlet’s swinging tail, she ran on the pathway, and finally exited at an opened-up area, where large amount of rubble had accumulated.

The sight expanded before her eyes, that was—

The ground had been gouged out in a big way into the shape of a bowl. There were flames blazing everywhere.

The historic ruins in the surroundings melted into something like lava, and no longer contain their original shape.

…Just how extra-high of heat did it basked in to end up like this?

She muttered in a daze, at that time.

She heard a gasping-like groan coming from somewhere.

Fianna looked around in a fluster.

Then, she saw Scarlet’s tail swaying at the other side of a crumpled wall.

She hurriedly went around to the other side of the wall.

She discovered Claire lying dead tired at the wall.

“Claire, hey, get yourself together!”

Seemingly worried, the hell cat spirit was going in circles around her.

Upon taking a spirit crystal from her uniform pocket, Fianna pressed it onto Claire's chest.

Within the empty ruby eyes of hers, a small flame of consciousness lit.

"What on earth happened?"

Then, Claire placed her shaky hand behind her back, and took out one sword.

It was a familiar demon sword of darkness. ...Even its appearance was subtly different, but there wasn't a doubt, it was Ren Ashbell's elemental waffe, the Vorpal Sword.

Fianna asked back, and at that moment.

"I should have had already warned you not to appear in front of me again, Fianna Ray Ordesia."

In an instant, her heart was grabbed by that voice.

While feeling cold sweat spouting out from her whole body, Fianna turned around.

There was a crimson flame violently blazing.

She appeared from within that flame.

She had glamorous long black hair and a deep-crimson-red mask that was like scraped out of a burning flame.

She wore a military uniform of the Theocracy, and her body was clad in sparks fluttering down.

She had been secretly maneuvering in the shadows so far, so why did she show herself at this timing?

—Her motive was obvious.

Fianna stood up to protect Claire who had fallen. 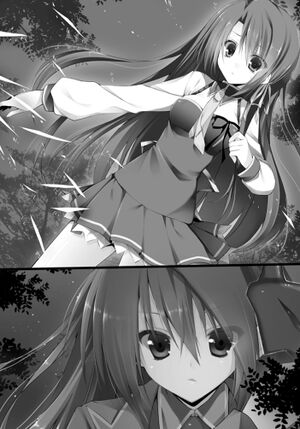 She knew it was a futile resistance.

Nevertheless, she couldn't leave Claire, who was vaguely conscious, behind and escape.

"Rubia-sama, I don't understand what beliefs you have. However, if you're going to hurt my friends—I'll... stop you!"

Agilely drawing a magic formation in the air, she summoned Georgios.

Instantly unsheathing its sword, the knight spirit rushed at her.

"It's futile. Your resolution will never reach me."

—The flames throbbed. There was a flame that was clearly different from the surrounding flames, a freezing blue flame.

The moment that flame touched its armor, the whole body of the knight spirit collapsed instantly.

The overwhelming difference in power was displayed.

Ren Ashbell was clad in the freezing flame, and her black hair was violently fluttering.

"—Your time is up. I shall welcome the Darkness Queen into my hands."

Removed the deep-crimson mask that concealed her face.

*Crack* The mask landed on the ground and broke.

Fianna was petrified at that spot and couldn't move.

She had extremely beautiful eyes of ruby that harbored blazing flames.

The glamorous black hair that was a trait of Ren Ashbell gently flared up.

As if the flames were painting over the darkness—

That was the color of her hair during the time she was once called the Fire Queen.

There was a groaning voice from behind.

Both pairs of flame-harboring ruby eyes met, and then—

"—It's time for the awakening of the Demon King."