On a giant canopied bed, Kamito was groaning in discomfort.

Kamito partially opened his eyes and cast his gaze at the window.

The sky was gradually brightening. Dawn's rays were shining on the walls of the small town.

...I didn't get much deep sleep, huh? After some time, he began to dream again.

However, this dream did not leave a very clear impression behind. No matter how hard he tried, he could not recall.

Muttering to himself in his thoughts, Kamito used a towel to wipe the massive amount of sweat he had perspired during his sleep.

Then Kamito slowly sat up and removed the shirt he had been wearing for the night.

Three days had passed since the battle against Leviathan, the strategic-class spirit released by Sjora Kahn. Kamito and company were staying at Mordis, the stronghold city, and the sleepless nights continued.

Since water spirits were practically absent from this place, the nights were also unbearably hot.

Next to his pillow was a spirit crystal he had borrowed from Rinslet to release cold air, but the sealed ice spirit, unable to bear the desert's harsh heat, had escaped from the spirit crystal long ago.

Putting on a fresh shirt, Kamito lay down on the bed again.

"I used to be able to sleep soundly no matter how uncomfortable the environment..."

During his days as an assassin raised by the Instructional School, he could sleep soundly anywhere, whether damp caves or forests in the pouring rain. By the time he knew it, his body had gotten used to ordinary life at Areishia Spirit Academy.

Kamito naturally looked up at the ceiling, muttering to himself.

"It's been a very long journey."

Instead of his memories from the Instructional School, where he had spent the majority of his life, what suddenly surfaced in his mind was—

Bits and pieces of life since enrolling in the Academy several months ago after Greyworth summoned him.

Forming a contract with Est in the cave. Obtaining victory with his comrades of Team Scarlet, earning the right to participate in the Blade Dance tournament. The deadly battles against Muir, Leonora and Nepenthes Lore on Ragna Ys. Rubia's reveal of the plan to assassinate the Elemental Lords.

"That's right, we freed Elemental Lords who were tainted by the Otherworldly Darkness—"

Having emerged victorious from the Blade Dance and granted an audience with the Elemental Lords, Kamito had liberated the berserk Fire Elemental Lord, but losing Restia as the price.

After that, there was the incident where former Numbers knight Lurie Lizaldia and the Holy Kingdom cardinal Millennia Sanctus attacked the Academy, followed by the battle in Laurenfrost territory and finding Restia again. They were then caught up into the conspiracy of the Ordesian throne's succession, and currently on the run, pursued by the Empire.

"An almost absurd set of experiences. And it's only been a couple months—"

Incredibly, he was starting to miss his days attending lectures in classrooms, shopping at the Academy town.

His classmates in Raven Class, Carol the maid, homeroom teacher Ms Freya. In addition, there was Greyworth with whom he had crossed blades at the canyon in Dracunia—What were they all doing now?

How unbelievable all the details he could remember about everyone.

In the bed, something seemed to be moving—

Sort of crouching or kneeling, the creature in the bed was a sword spirit, naked except for a pair of kneesocks.

Blushing at the sight of Est's naked body, Kamito frantically looked away.

Est would often slip into Kamito's bed whenever she wanted. Due to Kamito's recent reminders, Est had gradually reduced such occurrences down to about twice a week.

Normally, Kamito would scold Est and order her to return to her sword form.

But right now, Est seemed a bit different from usual.

From her eyes whose emotions could not be read, staring at him, Kamito could sense faint wavering.

"A dream from a very long time ago."

—A past dream. Then it probably took place before Kamito and Est's encounter. For a spirit like Est, who had lived for thousands of years, her concept of "the past" was incomparable to what humans could understand.

However, Est was currently separated from her main body, thus preventing her from accessing the majority of her memories. It was very likely that this dream was a means to express the past memories that Est had lost.

"I forgot. I only remember it was a very sad dream."

She must have sneaked into his bed because she experienced a dream whose content she could not remember, but still left her with unease.

If that was the case, there was no helping it—Kamito shrugged and suddenly thought of something.

Kamito's gaze settled on the spirit seal carved on his right hand.

A rare portion of elementalists were able to share memories with their contracted spirits. The dream Kamito had just experienced might have been a memory from Est's main body.

He was suddenly struck by intense pain in his brain. A vague image flashed in his mind. However, he still could not recall the content of the dream. Still, remnant emotion resembling sadness lingered in his mind.

Est looked up at Kamito's face and brushed her fingertips across his cheek.

Kamito gently took her hand and held it.

In front of Kamito, who was speaking with a blush, Est nodded while quietly murmuring an incantation in spirit language.

In the next instant, particles of light surrounded Est's naked body—

Est conjured a loose-fitting shirt, draped over her shoulders.

Kamito turned red and exclaimed in panic. Clad in a shirt too big for her, the half-naked kneesocks spirit looked in some ways even more scandalous than fully nude.

"Not allowed to sleep in the Academy uniform."

Looking closely at Est's shirt, Kamito noticed it was constructed using Kamito's own shirt as a reference.

...Naturally, it was the wrong size. 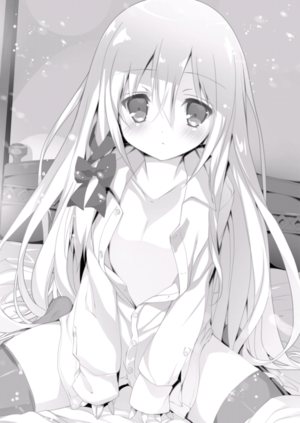 She looked like she was not wearing any underwear.

What he had glimpsed was probably without underwear, no, she clearly was not wearing underwear.

"Sheesh, you've got to create underwear too!"

A pair of pure white panties appeared in Est's hand.

While Est was holding the ribbon, putting on her panties, producing the rustling of fabric in the meantime...

Kamito breathed a sigh of relief the moment Est finished.

He could hear boots, the sound of someone's powerful footsteps in the passage outside the room.

Not the loafers that Claire and the girls wore as prescribed by the Academy. Instead, they were steel-toed combat boots—the footsteps of Rubia Elstein.

Kamito panicked. If Rubia were to see him in such circumstances, surely all kinds of misunderstandings would arise.

"Est, sword! Turn back into a sword!"

"Then I should remove the panties?"

In that instant, the door to the room was violently flung open.

"Ren Ashbell, we are holding an emergency war conference. To the great hall immediately... What the!?"

The moment Rubia Elstein opened the door, she froze.

In front of her was a naked sword spirit dressed in a shirt, in the middle of removing her panties, and Kamito, desperately pushing her down.

The border region between the Alphas Theocracy and the Quina Empire was a vast desert. This wide expanse of land, with its broken leylines, forsaken by the power of spirits, was known in spirit language as "Ghul-a-val," meaning the Desert of Red Death.

Due to the violent demon beasts living in the desert and the red sandstorms howling and raging throughout the daytime, even the greedy Theocracy merchants had no choice but to take a detour along the coast when traveling to the Quina Empire. From the Quina Empire's standpoint, Ghul-a-val was the giant obstacle and only reason why they had not annexed the vast lands of the continent's center.

This was the most desolate land on the continent, inhospitable to spirits, much less humans.

In this desert, two travelers were walking aimlessly.

"Hey princess, is that thing really in this shithole? We've walked around for how many days now and it'd be shit outta luck to die here out in the open."

"According to Theocracy lore, the Demon King's Tomb is believed to lie in Ghul-a-val. When one who is truly worthy makes a visit, the Tomb will reveal itself—"

Walking behind the young man, the girl replied to his profanity-laced query.

There was a veil over the girl's face. The girl had cast protection to envelope the two of them, defending them from the wind. Under such a powerful sandstorm, it felt only slightly reassuring.

"As a member of the royal family, you're supposed to be worthy, right?"

"Even throughout the history of the Kahn dynasty, only a handful had visited the Demon King's Tomb. Do I have the right to visit the Tomb, I wonder?"

"Ha, I see now. Even if you're not worthy, know that I, the great one, should have the right. After all, I'm the Demon King's successor, recognized by all the geezers at the Instructional School."

"There you go again with that claim..."

Jio Inzagi was the male elementalist claiming to be the Demon King's successor.

He was the benefactor who had freed Saladia Kahn from her imprisonment by her elder sister.

His combat skills were unmatched by even the royal guard. Fighting valiantly while employing numerous spirits, the way he fought was definitely reminiscent of one who had inherited the Demon King's abilities.

His ability to use spirits came from the cursed armament seals carved over his entire body.

One could not consider him a true elementalist.

(Although I am very grateful to him for rescuing me...)

This self-proclaimed Demon King's successor with delusions of grandeur had his eyes set on the Demon King's Coffin lying dormant in the Tomb.

Presumably, this man only saved Saladia in order to exploit her for her knowledge of the Tomb's location.

(We are simply using each other...)

Murmuring in her thoughts, Saladia Kahn lowered her gaze lightly.

In any case, she must obtain the Demon King's Coffin.

Currently, with her father the king assassinated and her sister dead, she was the only successor to the Kahn dynasty.

However, someone claming to be the Demon King's reincarnation had suddenly appeared at Mordis.

This man, who had put a stop to the berserk strategic-class spirit Leviathan and defeated Sjora Kahn, not only gained the zealous support of the populace at Mordis but also Zohar as well.

Saladia had no idea who that man was, but she knew this "Demon King" would surely deem her as a hindrance to be killed if he found out that she, the Theocracy's second princess, was still alive.

In order to take the throne, Saladia Kahn must obtain the Demon King's Coffin, to let the people know that she is the Theocracy's legitimate successor.

(Legend has it that the Demon King's Tomb has a powerful guardian.)

Although Saladia herself was an outstanding elementalist, she still lacked confidence on her own. At least, her current companion was strong enough to serve as a bodyguard despite being an arrogant and delusional man.

(Indeed, I must get hold of the Coffin at the Demon King's Tomb... The Coffin—)

For some reason, there was a slight sense of dissonance suddenly flashed in her mind.

Why did she desire the Demon King's power so badly?

—Right now, are these actually my own thoughts?

Just as she clutched her head, crouching down on the spot...

"Hey princess, I want an answer from you."

"Are there any spirits in this desert?"

"Answer me. Have you heard of spirits here?"

"Okay, if that's the case, what's that over there?"

Jio Inzagi irritably pointed out into the desert, shimmering like a mirage.

There, amid the raging sandstorm was that.

<—Art thou one who is worthy, here to visit the tomb?>

A giant, glowing with blue light, was glaring, looking down at the two of them.