Kamito muttered that name as he lay on the bed in the dim room.

The number two of the Instructional School who had received the title "Monster."

He thought that they would never meet again after that day.

And yet they ended up meeting in such a terrible way.

What reason could that girl, an orphan from the Instructional School, have for coming here—

It was not like he couldn't guess. Just a few weeks prior, Kamito had fought with another orphan of the Instructional School, Jio Inzagi.

The one behind the incident that time—

His left hand under the leather glove ached.

At that time. A knock came from his room's door.

While pressing down on his hurting ribs, Kamito got off the bed.

He opened the door and—

A cute cat was there.

No, more accurately, it was somebody wearing cat ears on their head, the Empire's second princess.

Fianna cleared her throat and said,

"It is a healing ritual."

"Kamito-kun, you were hurt, right?"

It was the injury he received when he was hit by Muir's water spirit.

He had been hiding it, but it appeared that the holy spirit user had seen through him.

Kamito was pushed onto the bed in that manner. 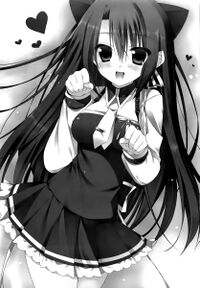 The feeling that had pushed on his chest made his heart throb unconsciously.

Fianna quickly amended the end of her sentence.

"Liar! I think something's a little strange with that!"

That morning when she had packed her luggage, he was sure those cat ears had been there.

The other things included rope, a candle and a whip......she had packed them under the pretense of them being ritual equipment, but there was a lot that was fishy about it.

"Um, Kamito, you don't like this kind of thing?"

Fianna asked with a nervous expression.

About enough to make him want to pet her.

Fianna made an expression of relief and relaxed.

The captivating sound of rustling clothes. The breath coming from near his ear.

"Don't move. We have to be touching or there won't be an effect."

The cute princess's lips and her fingertips glided over his bruised ribs. Her moist tongue running over his wound tickled.

"Fufu, Kamito-kun, does it feel good?"

Even if asked in this kind of situation, there was no way he could honestly reply.

As expected of a former elite princess maiden of the Divine Ritual Institute.

Even though it wasn't her specialty, her ability in it was top-class.

Not just the wound but even his whole body's fatigue being removed could be felt.

Kamito stopped resisting and left his body in her care.

"......But I'm always surprised by it. Your regenerative ability, I mean."

He hadn't paid particular notice to it, but it appeared to be that way.

It seemed like it was thanks to the development of the divine power of an elementalist flowing within him.

But it was to an abnormal degree in Kamito's case.

"Isn't it because you've contracted with Est?"

A contracted spirit's attributes affecting the contractor wasn't anything rare.

For example, Claire's ability to have her hair stand on end was because of this. Because of Est's attribute being metal as a sword spirit, his body may have become robust as a result.

"But it doesn't seem to be just that."

However, of course, there was no Cursed Armament Seal on Kamito.

Kamito shrugged his shoulders while saying that and received a reply,

"Of course, it's not like it's totally ineffective — it's being repelled. That's why I have to be touching you like this."

"Look at that, your body is so stiff. Relax more."

Fianna smiled teasingly and gave his ear a playful bite.

"Like I said, I wouldn't do this stuff with just anyone, you know?"

To Fianna who pressed her lips together while looking unsatisfied,

The one standing there---

It was Claire with a blazing Flametounge in hand.

Kamito seriously prepared himself for death.

"Now, choose! The way you'd like to be roasted!"

"That's why I'm saying, that was a healing ritual!"

Five minutes later. Kamito was made to do seiza upon the dusty floor.

In front of him was Claire who was sounding her whip.

Her red twintails were standing on end......it seemed she was quite angry.

Claire looked down at Kamito with a cold gaze—

"Hmph, with cat ears? And pressed against a large chest in that ma-manner?"

......It was no good. Regardless of what he said, those cat ears took away all credibility.

Said Claire, who shrugged her shoulders and sighed deeply.

Because of Claire's glare, Kamito shut up.

Her mood was still bad — but it seemed like she would overlook the situation this time.

But the conversation didn't end there.

"I have something to ask you."

He had made his resolve for this.

Or rather, he'd been thinking about it since a while ago.

"The girl who attacked me — you knew her, right?"

"What did she mean by nii-sama? Who is she?"

The assassin that had been aiming for her life was his former teammate and friend.

Being interrogated was natural.

"What's wrong? Why aren't you saying anything?"

Claire's voice had a tinge of irritation mixed in.

But Kamito averted his eyes from her and kept quiet.

He felt that he should reveal his relationship with Muir Alenstarl. He knew that in his head.

But if he did that, he would also have to reveal that he was an escapee of the Instructional School.

His childhood when he had battle techniques necessary for an assassin hammered into him.

Something that he could never erase, that unpleasant past.

(If she knew the truth about me, Claire would—)

At any rate, it would be different from now.

He was scared of that.

He derided himself while avoiding Claire's gaze.

He wouldn't have even thought about this two months ago.

He didn't care how other people viewed him.

If he could get Restia back, then that was all he needed — that's what he thought.

"Is it something you can't tell even me?"

"Could it be a past lover—"

A cold voice with slight irritation that even shocked himself.

He gasped and looked up at Claire who had her eyes wide open in shock.

He also understood that she was worried for his sake.

But — no, that was the reason, that's why he couldn't tell her.

"Because you won't talk about yourself at all."

"And it's not just this. Even about that darkness spirit girl—"

"The thing about Restia has nothing to do with Claire."

Kamito shook his head coldly. That showed his complete rejection of her question.

Claire breathed out waveringly and—

Turning her back on Kamito, she left the room in silence.

He was regretting getting angry with Claire for no real reason.

That said, there was no way he could discuss his past with her.

At that moment, Ellis and the others entered his room.

"Kamito, did something happen with Claire?"

"She really can't be helped. Well, she'll be back before the dance."

"The opening ceremony's dance. Of course, Kamito will also be attending, right?"

When Kamito shook his head, the three cried out at the same time.

Kamito had a little trauma concerning the dance.

The Blade Dance he participated in three years ago as Ren Ashbell. Remembering all the dance invitations he received during that time gave him goosebumps even now.

Of course, he wasn't going to be dressed in girls' clothing this time around so there was no direct connection, but he still couldn't erase that feeling.

"That and I have no formal wear."

"They'll lend you formal wear if you ask."

"The Blade Dance participants will be coming out at the dance, meaning that Ren Ashbell will also be attending."

To the Fianna wearing a teasing smile, Kamito—

Claire would also wear a dress — that thought popped into his head.

Kamito got off the creaky bed.

"Kamito-san, where are you going?"

"To find a cat. It may have become lost."