—The next morning, Kamito woke up on a bed in the medical office.

He, honestly, didn't remember much about what happened after that.

He had over-used his divine power in using Est, and his consciousness had become hazy.

Jio Inzagi was apprehended by the Sylphid Knights of the academy, who had rushed over, and was handed over to the Ordesia military as the suspect of the incident. That fake Demon King, who lost his Blood Stone's power, no longer had any power to resist.

The Jormungandrstrategic-class militarized spirit, which was sleeping under the mine, was resealed without problems by Fianna holding the ritual kagura of resealing. The shrine, above ground, was also completely destroyed by the Knights. There should never be another chance for it be released.

The darkness spirit Restia had disappeared the moment Jio's arm was cut off.

That did not mean that she vanished— That was what the throbbing of the spirit seal, engraved on his left hand, had told him.

(Restia, what on earth are you trying to do?)

(—Because that was her wish.)

His former contracted spirit said that. And then, that he would meet (her) eventually.

Who was this "her" she had mentioned? Was she possibly referring to the (other) Ren Ashbell who was participating in this round's Blade Dance?—

(In any case, as long as we advance, we should be able to fight her.)

Their school ranking greatly went up due to the S-rank quest achievement this time, but there were still many high ranking teams. Besides, even if they reached the Blade Dance, the elite champion teams would be selected, not only from this academy, but from every country of the continent.

Making a bitter smile, Kamito tried to get up from the bed, at that moment.

A soft sensation was squirming about from under the sheet.

He flipped up the sheet in a fluster.

The one who was there, was Fianna, who was wearing a dress-like uniform on her body.

"How disappointing, I already got discovered. Despite that I was thinking of playing various things after this."

The princess brushed up her glamorous black hair, and cutely stuck out her tongue.

Being peered at by a hair-raising upward glance, his face spontaneously turned red.

"Fufu, do you know that a princess maiden of the Divine Ritual Institute knows various techniques to let spirits enjoy themselves?"

"I'm joking. However, look, do you feel that your vitality is recovering?"

He felt some sort of energy swelling up in his whole body. Normally, his divine power shouldn't have recovered this much just by resting for about a day.

"It was a secret ritual kagura of the Divine Ritual Institute to distribute a princess maiden's divine power—However, to use it, our skin must be closely stuck together. If you're offended, I'm sorry."

"You're not thinking that I'm an im-immodest girl, right? Even I'm really... embarrassed."

"I-I'm sorry... Thank you. However, you don't have to force yourself."

Kamito apologized in a fluster.

She was pretending to be mature, but she was really an innocent princess. After making her this worried, he could not tell her to move aside.

"I'm not forcing myself. I'm doing it because I l-like it."

Fianna quickly turned away with her face still red.

"...Hey, Fianna, is it really alright for you to not return to the Divine Ritual Institute?"

The reason that she tried to participate in the Blade Dance should have been to regain the power of her contracted spirit by the Wish granted to the victor.

That Wish had already come true, so— there was already no meaning to stay in this academy.

"It isn't possible to return after all this time. Besides, you know—"

Fianna brushed up her long black hair, and gently brought her face close.

"I have another Wish I want granted."

"What? What's your another wish?"

There was a soft sensation on his cheek.

As her cherry lips pecked, it touched and softly left.

Kamito groaned with a deadpan look.

The princess expressed an impish smile— and, at that moment.

*Gacha*— The room's door had opened. 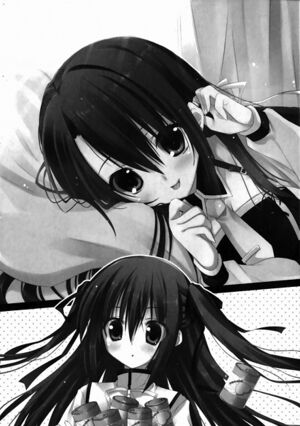 It was Claire who was carrying a large amount of peach canned food.

...It seemed like she had come to visit him.

She saw Kamito, who was entangled with Fianna on the bed.

"Wait, it's a misunderstanding. Because this isn't what you think..."

"Wh-Why are you making such a pretense, it's like throwing firewood into the mouth of a volcano!?"

"Georgios, chase that noisy girl out!"

At that moment, the hell cat and the armored knight appeared from empty space.

While the hell cat looked intimidating, the knight unsheathed its sword.

Such a shout from Kamito was erased in vain by the violent sound of weapons clashing.

The peaceful sickroom transformed into a battleground for a blade dance within a moment.