Chapter 10 - Showdown with the Past[edit]

Inside the forest crackling from the fire—

"......Kamito is an assassin trained at the Instructional School?"

Ellis, Fianna and Rinslet all exchanged glances while collapsed on the ground.

Instructional School — if one were to ask the empire's people, there would be no one who had not heard that name.

Four years ago. At the same time as the Calamity Queen's rebellion, the empire's dark side was revealed.

In the intercontinental regions, orphans that appeared to possess the right disposition were gathered and trained as assassins by a gathering of fanatics.

It was not something that could be believed immediately.

But if it were true—

It also explained why he hid his past so obstinately.

"Aha, was it shocking? Onee-chan."

Muir said that with a sneer.

"Nii-sama is a monster just like me. He's not human."

Ghastly plants with living tendril extensions growing from it emerged from the ground and attacked Claire and the others.

Being completely drained of energy, the four were at the mercy of the plants and were lifted into the air.

The slimy plants tore the girls' dresses and touched their bare skin like tentacles.

They struggled against the unpleasant feeling, but were unable to put up any resistance.

The flames disappeared like smoke and were completely extinguished.

Spirits were unusable by anyone except pure maidens. Even if you had a close bond with the contracted spirit, this didn't change.

The purification ceremony that the spirit contracting princess maidens underwent before sacred rituals or blade dances was to achieve this condition.

The teasing disgraceful treatment wasn't without purpose. Muir was corrupting their bodies so they would be unable to use their contracted spirits.

But there was no time to feel shy from showing an unladylike appearance as the plants dug into their limbs.

Breathing was becoming difficult with the creaking sound of their bones.

"You're crying out in a nice voice. I'd like to let Nii-sama hear it as well."

Inside her conscience that was growing faint—

Just then, the flash of a sword.

Following that, Claire's body fell down into the mud.

Ellis, Fianna and Rinslet were also successively freed from the plants.

Kamito breathed heavily and stood a short distance from the roaring Tiamat.

His face was pale as if lacking blood and he was drenched in cold sweat. Thanks to Est suppressing his condition, he could more or less continue to stand.

Claire let out a surprised voice. 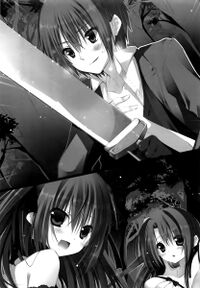 With just that, Kamito understood.

They had learned about his past.

Kamito turned away from Claire and nodded.

"I'm the same as Muir, an orphan from the Instructional School."

He heard a gasp.

It wasn't just Claire. Ellis, Fianna and Rinslet as well.

They widened their eyes as the cruel truth was appended to Kamito's profile.

A disgusting child of darkness. Possibly a pitiful monster.

He didn't know which was better.

Whatever the case, their relationship would change from now on.

And continued forward to stand before Muir Alenstarl and Tiamat.

"Claire, I'm sorry for keeping it secret until now. But—"

He gripped Terminus Est in both hands.

"I will definitely protect you all. That will never change."

Kamito let out a voice that fully ignored the atmosphere of the moment.

Over there — a whip sounded.

The leather whip struck his back just like always.

"That hurts! What's that for!"

While shouting, he turned around—

Cold sweat ran down his cheek.

......She was angry. The hell cat girl was extremely angry.

Claire rapidly advanced towards him.

Her ruby eyes glared at Kamito.

"The reason you wouldn't talk about your past!"

Slight tears were present at the corners of her eyes.

"If I knew about your past, you thought that I'd look at you with those kind of eyes?"

"N-No, because I came from that Instructional School......"

Kamito was overwhelmed and backed away.

"Well, of course, I was a bit surprised, you know? I was surprised but—"

The three other young ladies also said as much with astonished expressions.

Her face was close. It was a distance where lips would meet if they were any closer.

Or rather, if he actually looked, Claire was completely naked other than her panties.

Even in this kind of situation, his heart throbbed.

"Your past has nothing to do with it."

Claire gazed at Kamito with a serious expression.

"After all, you're our teammate and my important—"

"Because you're my slave spirit!"

He felt that he should have trusted his companions more.

It had only been two months since he had met Claire and the other young ladies.

But they had passed all that time together.

Even if they learned about his past, that time wasn't something that would change so easily.

Despite the fact that he should have known that—

"Hmph, what a troublesome slave spirit."

And Muir Alenstarl muttered that.

"What are you saying? Nii-sama is a monster just like Muir!"

Kamito looked up at the girl riding on Tiamat's back.

Muir widened her eyes and—

Glared, not in Kamito's direction, but Claire and the others' direction.

The Cursed Armament Seal on her right hand began to glow ominously.

The scales covering its body blew off and chunks of meat scattered.

Muir Alenstarl — a girl, who for some reason called him nii-sama, was a dear existence to him.

Having hardly changed, she still possessed a cute childish face.

A slight pain crossed his heart.

"Sorry, Muir. The young ladies I must protect are here."

Kamito raised the Demon Slayer — Terminus Est in both hands.

"You can't abandon your past, nii-sama!"

"Yeah, I have no intention of abandoning it. This sword is—"

The sword in his hand shone with light—

"To protect those precious to me and carve the way to the future!"

At the same time, Tiamat's fire dragon released a breath of flames!

He didn't avoid it — pouring divine power into his blade, he blew away the flames.

With a power that drew out a spirit's power to its limit — Jester's Vise's user.

One who was without equal in large-scale destruction, the number two of the Instructional School.

And the spirit she was controlling now, the annihiliation spirit Tiamat, was a top-class spirit.

The opposing Kamito was heavily injured.

He wasn't the strongest blade dancer, Ren Ashbell, anymore, but could he win with such rusty skills?

Kamito kicked the ground and accelerated.

For some reason, he didn't feel like he would lose. There was no prediction that showed him collapsed on the ground.

(Companions that trust in me are here — just that is making my body unbelievably light.)

Innumerable wind blades were released. His limbs would be lost if they even grazed him.

"—O wind, to the brave warrior, grant your divine protection!"

From behind, he could hear the chant of a gallant knight captain.

A whirlwind gathered around him and protected his body. Ellis' specialty flying spirit. Kamito jumped and accelerated again — he dodged all the wind blades by jumping over them.

The gleaming white blade in the dark of night. With that, the wind dragon's head flew into the air.

Muir opened her eyes in shock.

Mad with anger, Tiamat broke free of her control and attacked Kamito fiercely.

The earth dragon opened its rock-solid mouth filled with dull fangs. It dropped its head and in that instant, Kamito—

—A blade flash drew an arc and the earth dragon's head fell like an iron hammer.

"Why!? Nii-sama, nii-sama isn't even awakened yet—"

"Muir, during our time at the Instructional School, did you win against me even once?"

But that was only in terms of large-scale destruction.

Against Kamito who specialized in assassination, it was a bad match.

If each of the five heads was cut off one by one — it was not an unbeatable opponent.

The water dragon and fire dragon attacked at the same time from both directions. Kamito sunk his body — and flew using the power of the wind armor. Circling around behind the heads in an instant, he beheaded them both at once.

These were the sword techniques for assassination taught at the Instructional School. Kamito's true blade dance. Moves that were sealed in academy battles.

Kamito quickly corrected his stance — and just then.

The neck of the water dragon flapping in the air released a water breath.

Cutting the head off was not enough to be a killing blow. With that, Kamito's body was blown into the ground.

He tried to stand quickly but—

In the mouth of the remaining holy dragon, light gathered for its Holy Ray.

It was an attack that would wipe away a human in an instant.

The burning Flametounge drew a red line across the sky.

The flaming whip hit the holy dragon's neck and stopped its movements momentarily.

Rinslet's ice arrows struck the still-open mouth of the dragon and froze it.

No. It wasn't just a freezing arrow—

In concert with Rinslet's words, the demonic ice shattered.

The resulting ice blades sliced all over Tiamat's body.

The giant dragon's body stopped moving and in a split-second—