In a space illuminated by faint light, Fianna opened her eyes.

Gasping in pain, she slowly sat up.

The ground which she used her hands to push against for support felt soft, like a feathered velvet carpet.

Next to her, an unconscious Ellis was lying on the ground.

"I have no idea either."

"After that white light swallowed us, I woke up and here we are."

Just as the two of them rushed over to Rubia and the Fire Elemental Lord, the silver-white flash of light had swept them up.

The ground had shattered. They fell straight down.

They could not remember anything after that.

(...But I seem to recall seeing some kind of gigantic white monster.)

Fianna touched what felt like a feathered velvet carpet.

The ground was warm and trembled lightly as though it were breathing.

"Anyway, we should be thankful we did not fall all the way down."

"I wonder what happened to Rubia-sama, and Kamito and Claire—"

Fianna looked around in a circle. The only people present were Ellis and herself, the two of them.

"The others are currently being located."

Riding the back of a white wolf, Rinslet appeared from the darkness.

"Rinslet, what on earth is going on? Where is this?"

Fianna asked a series of questions.

"In the belly of a spirit."

"Seeing you two fall from the sky, I hurried over to rescue you."

"You are right, of course not—"

Then whose was it?

"—It is mine, princess of Ordesia."

Suddenly, particles of light gathered in the air before them, forming the appearance of a girl.

An adorable maiden with hair the color of water appeared.

Inside a dense and creepy forest—

He was still breathing. However, it was still unknown whether he could regain consciousness.

Starting from the instant when the holy capital had shot out light, shattering the ground of Ragna Ys...

Claire had grabbed Kamito's hand and together they fell.

Although she had succeeded in slowing their descent by taking a spirit crystal out from her uniform pocket and activating levitation in haste, since it was not enough to support the weight of two people, the two of them had crashed into the forest in Astral Zero.

Not caring that the rain was drenching her, Claire called out with all her strength.

Est and Restia showed no signs of responding.

Right now, she was the only one who could save Kamito.

But as though in mockery of her—

Divine power of the darkness element gradually shrouded Kamito's body like a mist.

(Nee-sama had taught me the ritual for dispelling divine power of the darkness element...)

The ritual meant taking on the risk of getting devoured by darkness herself.

Even so, Claire did not hesitate.

(...Kamito has saved me who knows how many times.) 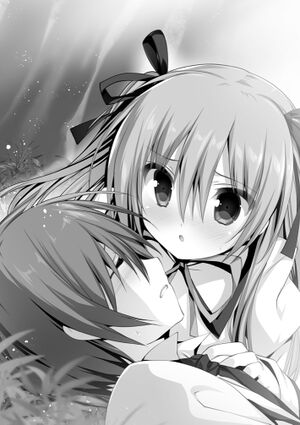 That's why, I have to be the one to protect Kamito this time—

Pulling off the ribbon at her chest with one hand, she unbuttoned her shirt.

Taking off the uniform, heavy from moisture, and removing her skirt, she was now wearing nothing except for a set of underwear.

In front of Kamito, she was displaying herself in an embarrassing state of undress on her own initiative.

The thought of this caused her skin to heat up in embarrassment.

However, now was not the time to be concerned about that kind of thing.

Claire bit her lip and steeled her resolve.

She slowly picked up Kamito's body, shrouded in dark miasma, in her arms.

Wrapped in silk underwear, her two adorable little mounds pressed tightly against him.

Blushing to her ears, Claire whispered softly in his ear.

Her lips, like cherry buds, touched Kamito gently on the lips.

First to be born were the spirits of Light and Darkness.

Next, spirits of Fire and Wind, as well as Water and Earth were born into that world.

The spirits created their own subordinate spirits and set about constructing the world.

Astral World was a perfect paradise of harmony and balance.

When was it that this state of affairs was broken—?

In a strange dream, Kamito opened his eyes.

His consciousness remained awake. The last thing he could remember was destroying the Demon King Solomon that the angel had summoned.

(...I was swallowed by Ren Ashdoll's power, which took control of my soul.)

In that case, what he was seeing now would not be a dream—

Inside a space of endless darkness, Kamito slowly stood up.

Held in his hand were two swords, the Vorpal Sword and the Demon Slayer.

The two swords that had been missing in previous dreams.

—Right now, they were in his hands.

(...I knew it, not a dream. It's my soul that has been trapped in her consciousness.)

"—Fufu, you have finally become mine, my dear adorable child."

The echoing voice made Kamito look around him in surprise.

—Behind him, dense darkness coalesced.

"Hi, this is actually our first time to meet face to face, you and me."

Facing a presence that seemed to nurture death, feeling a chill down his back, Kamito greeted humorously.

Without his two contracted spirits by his side, he probably would have spoken with trembling words.

"I commend your courage. You have more potential than the brat a thousand years ago who was known as the Demon King."

The mass of darkness flickered and gradually took on human form.

Skin so pale it was like bright snow came into view in the darkness.

Arms and legs as delicate as works of art made of glass. A petite body like a child's.

Furthermore, beautiful hair in the color of night, like that belonging to Kamito's darkness spirit partner. 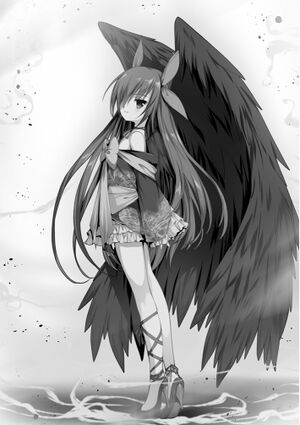 Her golden eyes, glowing mysteriously, were staring at Kamito with curiosity.

From the girl's back, jet-black wings spread out.

They looked like a canopy of night covering the world—