—In this manner, this tragic crisis, unprecedented in the Academy's entire history, finally reached a close.

The militarized spirits sent to town were all driven off, thus ending the turmoil in the streets.

The rampaging spirits were successfully pacified by a dance performance carried out by the Academy's princess maidens under Greyworth's directions.

Originally, there was supposed to be a second day of the Great Festival of the Spirits. Naturally, it was suspended. Students worked together with the restoration team sent by the Ordesia Empire to restore the city streets.

The Imperial Knights were still investigating where the militarized spirits attacking town came from. A rough hunch would point to them being possessions of Murders that was deeply connected to the interior of the Alphas Theocracy.

The Empire issued an ultimatum to the Theocracy to accept investigations. Once the newest hierarch, Sjora Kahn, expressed refusal, it would most likely develop into a war between the Empire and the Theocracy.

Lurie Lizaldia remained elusive. The presence of a traitor among the Numbers also came as a great shock to the Empire's top echelons.

Including the organization she belonged to, the Knights' Umbra and Virrey Branford started investigations in pursuit of her.

Also, deemed the mastermind of this incident, Millennia Sanctus—

There were currently still no clues regarding her.

—Hence, three days after the incident.

Having recovered his memory, Kamito was having a meal in the room while discussing future plans with the members of Team Scarlet.

"In the end, the Great Festival of the Spirits was postponed."

"Postponed, so that means it'll still be held?"

"After all, they can't let the world think that they're bowing down to terrorism."

"Kamito-kun, you're still going to wear that maid outfit, right♪"

Kamito groaned... He still retained clear memories of the time during his amnesia.

Ellis grumbled as a result.

"Ellis, are your injuries okay?"

Ellis was heavily injured, wrapped all over in bandages. It looked quite painful.

Even after receiving treatment, she still could not move on her own.

Everyone agreed with Ellis.

Coming up next was no longer a competition like the Blade Dance. They were going to be swept into a real war.

...Was it because of the long separation? She seemed to be trying harder to make him spoil her.

—These ordinary days, soon about to end, were especially precious right now.

Kamito cast his gaze towards the seal on his right hand.

Seeing Kamito like that, Claire and the girls remained silent.

Near the Ordesia Empire's border, in a certain dark forest, a girl woke up.

Her long, black hair scattered. Her dress, the color of night, was torn and tattered all over.

Her pale skin was covered with numerous marks, as though scraped by tree branches.

The half-naked girl opened her dusk-colored eyes and looked around her with unease.

No one replied. Frightening cries of spirits were coming from faraway.

Presently, the sound of bushes rustling could be heard.

An elderly couple, looking like they were taking a stroll in the woods, emerged from the bushes.

The old lady helped the girl up and fed her water from a flask.

"Lady, what happened? Are you lost in the forest?"

"Then where did you come from?"

The girl cocked her head in puzzlement.

"Hmm. That's something you should know, right? What's your name, lady?"

The girl's face gave a distinct reaction for the first time.

She nodded and moved her lips gently, speaking a name. 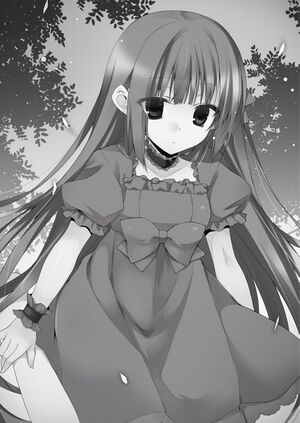