—Y-You mean for me to put on an even sexier attire, right?!

With that, it has been roughly a 3-month period since our last contact. This is Shimizu Yuu. I present you the third installment of the academy harem x battle comedy "Seirei Tsukai no Blade Dance" series that started at the end of last year!

To hand over chocolates to the boys they like— The academy's ojou-sama are in-preparation and restless of the arrival of the Valentia Holy Festival, an event that sets girls' hearts racing. Amongst them, Ellis, Captain of the Sylphid Knights that protects the public morals of the academy, tried to offer a certain act of gratitude to Kamito—

"I-I'm now your exclusive-use maid from now. ...I-Is that alright?"

There's the battle of love between beautiful girls where sparks fly. There's the darkness of the Cursed Armament Seals that undermines Academy Town.

And then, there's the academy's strongest elementalist who returned!

Please by all means enjoy this third installment fully crammed with the charms of the ever-serious and clumsy (and surprisingly big breasted) Ellis!

And at this point, big news came flying over from my person-in-charge Shouji-san!

What! The serialization of a comic edition has been decided in "Monthly Comic-Alive"!

The one drawing "Seirei" of the comic edition is Yoshihira Zenzai-sensei. I was shown the character designs the other day, but... they're dangerous, they're transcendently adorable!

The reason we could develop a media mix this early was because of all you readers, who had supported "Seirei". Please be looking forward to the day that Claire and Est get turned into a comic and move about.

It's time for the thanks. First, to Sakura Hanpen-sensei, thank you very much for this time's wonderful illustration too. Especially, the front cover's Ellis is most cute. Black tights are the best. And, as to why her breastplate is opened—that's an eternal puzzle, an eternal mystery, and an eternal romance!

To MFJ's charismatic Incubator Koto Shouji-sama, who had always warmly watched over the growth of my work, thank you very much for this time as well & sorry to troubled you—

And again, with Korie Riko-sensei, who's in-charge of the illustration of Gotou Yuujin-sensei's heartwarming, guardian spirit, romance comedy "Tsuki Tsuki!" that was sold at the same time as "Seirei", the drawing of supportive collaborative illustrations could be done. Korie-sensei, thank you very much. As "Tsuki Tsuki!" is a very interesting work filled with plenty of cute girls (Shimizu is of the Gogyou-san faction!), those who have not read it please read it by all means. —By the way, Sakura Hanpen-sensei's collaborative illustrations seem to be placed on "Tsuki Tsuki" Volume 3!

Chief editor Misaka, proofreading team, binding team, sales teams and the bookstores, really thank you for everything. Again, the new retailers Anibro Gamers had continued from the first volume, even the second volume of deploying extra-large signboards & blade dance roadshow.

And, of course, the greatest thanks go to all you readers who had read this book.

To everyone that sent in their questionnaires, I've read them repeatedly, always treasuring your thoughts. The questionnaires are the driving force for me to write my manuscripts, I'll be happy if you keep on sending them in!

※Digressing but when I opened the cash register at a part-time job (a certain bookshop) the other day, there was a customer who bought "Seirei", and it got my heart beating super-fast…!

The next one will be the fourth installment. The stage will be from the academy compilation (first section) to the Blade Dance compilation (second section)— as for the second section, I plan to make many of the foreshadowing and mysteries clear. Of course, with my "increased love, double the fun, superior battles!" slogan, the battle of love between the beautiful girls will heat up more than anything you've seen before!

At last, I pray that the entertainment that'll be created from now onwards would slightly bring peace to everyone, who're even now in harsh circumstances—

Thank you very much for many of your wonderful works that brought a smile out from the bottom of my heart. 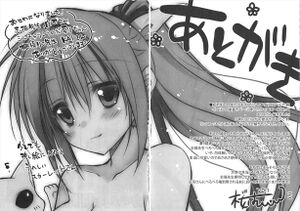 Nice to meet you, or perhaps, long time no see, this is Sakura Hanpen!

This time I'm given two pages for my afterword, so I've fully used the space.

Ellis in the 3rd volume was too cute that it was excruciating.

Even I, who's of the Rinslet faction, was almost bought over, how dangerous.

Then, here's some pleasant news! What, the series has been serialized as a manga!

The beginning of first serialization following my first light novel illustrations in succession has me very happy!

The manga drawings are really cute, oh-no, it's at a level that I want to Shizumi-sensei's pero-pero right on the manga edition.

No, it'll be a waste, so I'll hold to it, Shizumi-sensei's pero-pero right is really cute, so please really look forward to it! I want to quickly read it.

The next volume seems to be a book of personal benefit to me!

Shizumi-sensei, I'm looking forward to it! Thank you!!

Before Koto Shouji-san deprives me of my pero-pero rights, I'll be stopping here!! See you at the next volume!