--You have finally called out my name, Master.

I am truly thankful to everyone who bought this book!

Bearing Greyworth's entrusted wish in his heart, Kamito stepped onto the stage of the final round. Engaging in a blade dance of the night with the beauties in his team, what lies in wait for him in his peak condition of readiness--?

Thick with conspiracies, the Blade Dance festival. The intense clash of weaponry, sounding out loud.

Then there is the encounter between the demon sword of darkness and the hell cat girl -- the strongest flames awaken!

Although the previous "Night Before the Finale" was centered on love comedy, this time we begin the final round at last, hence this volume is filled with battles. The main attraction of this volume is the rare teamwork combination between so-and-so and so-and-so. Also, we finally reach the scene for XXXXXX's awakening. With Sakura Hanpei-sensei's color illustration, it can even be described as the most intense and unforgettable scene.

As is customary, here some acknowledgements.

First of all Sakura Hanpei-sensei has once again drawn super cute and super cool illustrations. Rubia-oneesama on the cover truly gives me shivers. Whenever the beautiful illustrations are delivered to me, I can't help but dance with delight. I am truly grateful.

As always, we have Umeda Natsuno-sensei's adorable chibi characters. I always look forward to the color page of the table of contents.

Currently serializing the manga version of Seirei Tsukai no Blade Dance on Comic Alive is Hyouju Issei-sensei. High quality battle scenes, brisk developments, attractive performances -- every time he draws a creation that far surpasses expectations. I am truly thankful. Summed up in one word: Excellent. To readers who have only read the original novel, please do try the manga.

Also, there is Shouji-sama who was responsible for the Seirei series ever since its earliest stages, supporting the work with an editor's burning soul. Thanks to Shouji-san's efforts all along. I am really thankful for the past two years. In the breaking of new ground, I look forward to your performance like a cheetah sprinting across the vast savannah (*meaning the way you always dress in a leopard print coat).

Starting from this volume, there is Narita-sama who started taking on the role of the one in charge. Let all of us of the Seirei team try our best to make this work an even greater success!

And of course, the greatest thanks goes to all the readers who have supported this series all along. The comments returned through the surveys have really really given me great encouragement.

Well then, because the afterword this time is quite long, so I'd like to announce the results of the popularity poll ending with the Volume 8 mobile phone survey. durarararara(sound effects)--

Number 10 is the ace of the Four Gods, Shao Fu. She appeared in a Chinese-style dress in a Volume 8 illustration. Foremost in strength and forthright character amongst the Four Gods, was that the secret to her popularity? Number 9 is Rinslet Laurenfrost the highborn lady. The number one bride equipped with all sorts of domestic skills. Number 8 is Claire Rouge. Even compared to the members of the team, she shoulders an especially heavy burden of a past, will she one day recover her original smile...? Number 7 is Kazehaya Kamito. Leaving a deep impression with his maid look and being ordered around by Greyworth in Volume 8... Or rather, his cuteness has already reached heroine levels. Number 6 is the expressionless fourteen-year-old, Milla Bassett. Who could have expected her to become a maid in her first appearance? Writing the parts about the Milla & Mireille combo was quite enjoyable. Number 5 is Fianna Ray Ordesia Her Highness the imperial princess. In Volume 8 while stalking the date, she became Dark Fianna at one point. She is the type whose popularity slowly rises. Number 4 is Ellis Fahrengart. Clearly a serious captain of the knights, but full of dangerous aura when she goes out of control, is that a mistaken impression? Also, her breasts are huge.

......Although Number 1 has a substantial lead on Numbers 2 and 3, in actual fact the difference from 4 to 9 is quite small. Anyway, now for the countdown of the top three!

Number 3 is the darkness spirit Restia. There was a time when she gave Est a run for her money, but because she had too few appearances in Volume 8, she has now slipped to Number 3. Will she display her power as the legal wife(?) in the future?

Number 2 turns out surprisingly to be someone who jumped from outside tenth place, the dragon knight Leonora Lancaster. I am quite surprised even as the author. Strong, cute, not wearing something -- bearing these three major elements, she will be a strong competitor for Team Scarlet.

And Number 1 is the Unmovable Queen, kneesocks spirit Est. Although she lost the top spot to Ellis once when Volume 3 was released, she has maintained supremacy ever since. Truly magnificent.

The QR code for the popularity poll and cellphone survey is found in the lower left corner. If you have comments, please send them together as well. The author and Sakura Hanpei-sensei are very happy to receive them!

--In any case, we finally reach a climax in the Blade Dance Festival arc for the next volume.

Let us meet again in the tenth installment, "The Awakening of the Demon King (tentative)"! 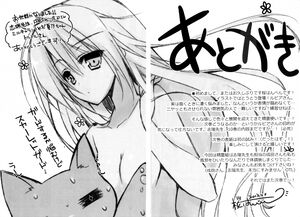 Nice to meet you and welcome back. This is Sakura Hanpei!

Rubia finally makes her appearance in the illustrations!

In actual fact, I racked my brain when drawing her. I had no idea how to get a grasp on her expression...

She seems like a character without any smile at all... It was truly a challenge! I must work harder and practice more...

With that kind of feeling, Seirei Tsukai has brought all sorts of developments...!

What will happen in the next volume... Or perhaps, what exactly is Rubia's goal? I really want to know! Shimizu-sensei, is the content for Volume 10 ready yet...!? (desperate)

Next volume's cover will be a new experiment! (Should be...!)

If everyone looks forward to it, I will be very happy!

This time in the Seirei team, whether Shimizu-sensei, Narita-san the one in charge, or me, we all caught a cold and got sick... Everyone should take better care!