In other words, use my body as you please—

And so, thank you for your patience, everyone. I hereby present the 16th installment of Seirei Tsukai no Blade Dance, "The Demon King Returns in Triumph"!

First of all, let me express my utmost apologies for the delay in publication time. Due to various production issues being resolved now, I'd like to release new volumes more regularly this year, so please forgive me.

So, in this volume, Ren Ashdoll and Restia's past relationship has become slightly clearer. In addition, I've inserted plenty of subtle foreshadowing.

The series is reaching an end, so what comes next is tying up loose ends in plot and foreshadowing. It looks I'll be able to end the story without issue by following the initial plan to make the series as long as possible. This is all thanks to your support, dear readers.

Next comes the usual acknowledgements. Thank you to Nimura-sensei for the beautiful illustrations. Spirit mille-feuille and the girls are extremely cute, but Kamito's Over〇rd-like appearance in the color illustration is the best. By the way, on the shoulder of the O〇erlord-like Kamito is Simorgh under a coat of metallic paint.

Next there is Hyouju Issei-sensei who is in charge of the manga version. Thank you for adapting the original work into a high-quality manga. As a manga, the quality is extremely high, with a very rich presentation. As a reader myself, I look forward to every month's release greatly. Est's galian sword design and others are awesome. I hope the manga version's final tankouban volume will be on sale in March!

Editor, I've caused so much trouble for you again...!

Finally, I am extremely thankful to all of you, dear readers who had supported me since the beginning. I always print out the comments in the surveys and read them over and over again. Also, to everyone who wrote letters to me, I'm sorry for replying late in recently times. The support and encouragement from everyone fills me with delight. By the way, in the popularity poll of Volume 15, Restia was first, Leonora was 2nd. Leonora-san so powerful...!

Due to limits on page count, I'll do a status update next. Since my hobby is simulation-type board games, so on a whim, I created a doujin board game, called "Draft Sengoku Daimyo", a battle formations game with a Sengoku Era theme. Here on, I'd like to continue participating in the creation of doujin games.

Also, I recently fell in love with improvised rap. When watching late-night TV, the people who come on stage are like language magicians, it feels very deep to me, so I bought many DVDs of rap battling contests to study, yo!

As for foreign TV dramas, every season of "Game of Thrones" fills me with anticipation. I really enjoy the original novels, but the television series is great too. The budget is astounding. This is definitely a must-see masterpiece.

As for smartphone games, I'm playing "Chain Chronicle" and "Shadowverse." The deck I use is Underworld Royal. Although the win rate isn't very high, I'm very happy when using Underworld to decide matches...

That's all, a status update without any focus. I am alive and well, just so you know!

—So, in the next volume, that "Demon King" from a thousand years ago and a certain someone with an intimate past with Est might be making their appearance in Volume 17, "The Sacred Maiden Arrives." See you again then! (There might be a short story collection before that.) 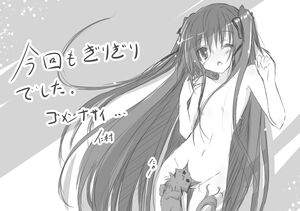 Again, I barely made the deadline this time.

Sorry for making trouble for everyone...