Under the night sky, a glamorous dance of flaming slashes began.

Passing through the wide open training ground, Claire made her way towards the ruins in the northeast.

However, spirit magic attacks aimed at Claire were blocked one after another by a pair of black wings.

"Darkness spirit, I never expected a day when you and I would fight alongside each other—"

Faced with a swarm of demon spirits that had suddenly appeared, the Imperial Knights were in total chaos.

Was it because their commander was absent? Coordination between units was insufficient.

"Speaking of which, I still owe you a favor—"

"Yes, on Ragna Ys. You saved me from those people from the Sacred Spirit Knights."

Claire remembered. It was during the final round of the Blade Dance.

"You don't need to return it. I did for Kamito anyway."

"Now that won't do, Claire Rouge—"

The launched jet-black feathers turned into a storm of darkness, shredding the demon spirits.

Witnessing the darkness spirit's astounding power, Claire could not help but gasp.

"If you manage to draw out the hell cat's full power, well, perhaps it might be an even fight."

"I have to admit, you are quite reliable when we're on the same side."

"You have improved too."

Although the two of them were always arguing, they were surprisingly in sync when working together.

Arriving at the plaza behind the student dormitories, they could see the base of the pillar of light.

It was a stone circle site formed from massive stone columns. 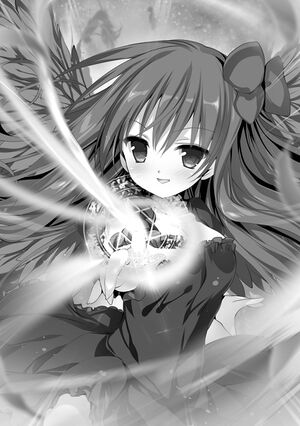 This used to be the ruins forming the gate within the Academy. Claire had used it before.

"Let's destroy it before they bring reinforcements."

An incantation written in High Ancient, carved on the ruins, glowed and nullified the flames.

...In that case, the only choice was to try using an elemental waffe to attack repeatedly to destroy it.

While slowly doing that, reinforcements were going to arrive sooner or later.

"Darkness spirit, do you have any way to destroy it?"

"...I could, but it will have to take some time. Of course, it would be a piece of cake if Kamito were to do it with my elemental waffe form."

Claire shrugged and walked towards the ruins.

"I will show you Scarlet's true power."

—Thou art the valorous valkyrie, the one who guideth the souls of warriors to the final battlefield.

"Respond to my call, I hereby announce thy true name—Ortlinde!"

In that instant, Flametongue in Claire's hand transformed.

—A blade chain forged from flames.

With twintails fluttering up and down, Claire performed a blade dance like a princess maiden.

Innumerable sharp blades, imbued with the power of flames, ripped apart the barrier, destroying the ruins and rendering it unrecognizable. 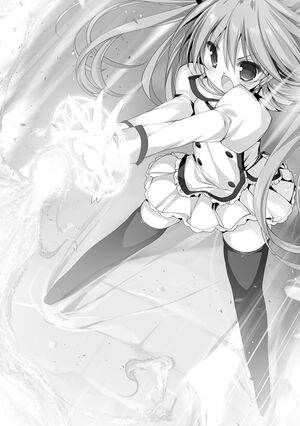 The team of Ellis and Rinslet was running northwest, heading for the old cathedral.

It was the building formerly used by the Sylphid Knights as their headquarters.

Rinslet drew her bow elemental waffe and shot an arrow into the sky.

The arrows of ice caused chain explosions as soon as they landed, immobilizing the legs of militarized spirits.

Seizing the opening when their movements were stopped, Ellis flew, enveloped in a gale.

The cyclone generated from the sacred spear tip swept away all the Empire's knights standing in their way in one go.

It was truly a sublime blade dance.

Without turning her head back, Ellis replied to Rinslet who had swiftly caught up.

"The demon spirits turn out to be more troublesome than the Imperial Knights."

"Yes, they are endless."

The ruins firing the beam of light had apparently started summoning huge numbers of demon spirits.

"Let us wipe them out in one go, Rinslet."

Ellis swung her spear, enveloped in a cyclone, while Rinslet fired an arrow that was like a storm.

This was a combination technique of elemental waffen.

The blizzard's sharp blades howled as they shredded the demon spirits.

Rinslet allowed her bow to return to Fenrir's form, then mounted his back.

Towards the circle of stone pillars, Ellis unleashed a full-powered strike.

However, it was easily deflected.

"The knights' reinforcements will come if we do not hurry."

Just then. There was a voice from behind.

Rinslet turned her back to see Fenrir tugging at her sleeve with his mouth.

Rinslet widened her eyes in surprise.

"Listen to me. A serious incident has occurred in Astral Zero."

"Uh, excuse me, Iseria-sama, we are currently quite occupied—"

"It concerns you too."

"At your current coordinates in the human realm, a gigantic gate has been opened. At this rate, Astral Shift will be invoked."

Hearing an unfamiliar term, Rinslet could not help but frown.

"Simply stated, it is a state when the human realm and Astral Zero overlap."

"That would be calamitous... What are you talking about!?"

Rinslet could not help but raise her voice.

Just then, cracks appeared in the air. A great number of demon spirits appeared next.

Ellis raised her spear and looked around.

There were roughly thirty demon spirits and they were clearly much bigger than the earlier ones.

Cold sweat flowed down their necks.

In the next instant, a flash of the sword swept through the darkness, slicing through space in all directions.

The demon spirits gathered near the ruins were annihilated in one go.

On the ruins, they saw—

A petite young girl with a gray hood, holding a long sword with the color of blood.

"All of you must leave now—"

The girl took off her hood and revealed her true identity to them.

The flash of the sword traced out countless arcs, instantly tearing through the gathered demon spirits.

No one could block him. Never would the Imperial Knights imagine in their wildest dreams that they were meeting the renowned Strongest Blade Dancer in battle.

(—Say, the coordination between teams is really bad, considering they're military knights.)

While sweeping away the Imperial Knights hurrying to the scene, Kamito thought to himself.

(...What the heck is their commander doing?)

Breaking past the garden that was crowded with spirits, he approached the ruins that were producing the pillar of light.

"He is here. Surround him!"

In the darkness, a knight called out.

But it was too late. Kamito extinguished his sacred sword's glow then slipped through silently, using the back of his single-edged blade to knock out the Imperial Knights one after another.

Using a spectacular blade dance to draw attention first then using the Instructional School's assassination techniques to silently eliminate his enemies the next instant. His ever changing combat style made the knights dance on the palm of his hand.

It looked like it could not be destroyed with ordinary power.

Kamito gripped the Demon Slayer tightly in both hands.

"—I shall not yield the ruins to you."

A girl dressed in holy vestments of pure white appeared out of darkness.

Hovering in the air, the girl looked down at Kamito with a smile.

"What is your goal in summoning demon spirits?"

"The demon spirits are merely a side effect."

"Her goal is to cause an Astral Shift."

"—To make the human realm and Astral Zero overlap."

"This is an experiment and a preview. To return this world to its original state. And start over—"

—To rebuild the world from zero.

Those were Lurie Lizaldia's words.

To make the human realm and Astral Zero overlap in order to fulfill that goal?

"Do not get in the way, Kazehaya Kamito—"

Millennia chuckled and lifted the eye patch over her left eye.

The demon spirits pouring out from the crack in space were getting more and more numerous.

Even though fortress spirit's bombardment did not stop, against overwhelming numbers, the barricade's barrier was nearing collapse.

The fortress spirit consumed vast amounts of divine power. Having lost the cursed armament seal on her heart, her body could no longer endure continuous operation for long periods of time.

Senior students of the Sylphid Knights helped support Velsaria who was about to collapse.

Her body felt scorching as though steam would come out any moment. In such a state, Velsaria was sustaining the fortress spirit through her extraordinary willpower.

Velsaria panted while brushing away a knight's hand.

There was a large number of injured and immobile students here. If she were to withdraw the fortress spirit's defense line, it would be tantamount to leaving them to their fates.

Opposite to the barricade, Muir's voice was almost a scream.

Velsaria turned her head to look.

...Only to see a despairing scene.

Out from an extra large crack in space—

An especially gigantic demon spirit was crawling out.

It was a mandible spirit with no limbs and no lips, just countless teeth.

Cracking open, it seemed to be laughing—

In the next instant, it crushed Muir's militarized spirit, Gargantua, in its teeth in one go.

"...! No way, that's a large militarized spirit that can build strongholds!?"

The defense line was instantly broken. Demon spirits swarmed into the barrier.

"Front line units, retreat while counterattacking. Withdraw to behind the Fortress!"

She deployed all cannons to fire at once.

Although a large group of enemies were instantly annihilated, the demon spirits kept appearing like smoke.

Her fortress spirit was not going to last long.

What made things worse was—

Velsaria's main cannon destroyed one of the large spirits.

However, that was the limit.

With a forceful gasp, Velsaria collapsed right there on the ground.

The core of the defense, the fortress spirit, proceeded to collapse, turning into particles of light then disappearing.

The collapsed Velsaria drew the sword at her waist. It was a ceremonial sword rather than an elemental waffe. However, if one were to pour divine power into the blade, it ought to be able to slay small demon spirits—

The senior students in the Sylphid Knights formed a circle formation, stepping forward to protect her.

"Please escape. We will do everything we can to buy time."

"...This body of mine should have died a long time ago. I shall fight here to the very end."

As though mocking them, the large demon spirits made bizarre noises while approaching—

In the next instant, the approaching large demon spirit was crushed with a splat.

A great steel sword with metallic luster had pierced the demon spirit's head in one strike.

Carved on the great sword's hilt was a dragon head design.

A girl descended to the ground, effortlessly pulling out the great sword embedded in the ground.

"Leonora Lancaster, Captain of the Knights of the Dragon Emperor."

The girl in military uniform introduced herself.

"Upon the orders of the Dragon King, I come to provide assistance."

She casually swung the great sword in her hand and chopped down another demon spirit.

Just then, dragon riders riding flying dragons landed one after another.

Raising the Dragon Slayer in one hand, Leonora turned the blade.

Unable to conceal a dragon's instincts, her eyes were filled with the joy of combat.

"—Feast your eyes upon the power of an awakened dragon."