—Do you dislike an immodest princess?

With this, it has been about two months of silence. This is Shimizu Yuu. I present you the second installment of the academy harem x battle comedy "Seirei Tsukai no Blade Dance", where swords, spirits and beautiful girls dance boisterously.!

Fianna, who moved into Raven Class, is the Ordesia Empire's former princess. She, who somehow knew Kamito's past, came intruding into Claire's room—

…Yes, I somewhat feel the premonition of a dreadful fighting scene (shivers).

A moral-less battle of the tsundere hell cat girl and the ero-cute princess. A mysterious enemy calling himself the successor of the Demon King. And then, the secret, which Fianna—who was called the Lost Queen—was hiding in her chest, is—?

The deplorable ojou-sama Rinslet, the pony-tail beautiful girl Ellis, nude knee-sock spirit Est also were involved, and the battles and the romance comedy are also delivered in a greatly increased amount!

Now then, this is a volume series that I started at the end of last year but thanks to you, the sales were satisfactory, and additional printing had been decided immediately after its launch. Everyone, who bought them, I really thank you!

"Seirei Tsukai no Blade Dance" is something I aimed to write without thinking of something complicated while being interesting as a light novel and amazingly enjoyable. After this, I'll also be earnestly pushing on steadily, so thank you!

Thanks time. First is Sakura Hanpen-sensei, who drew wonderful illustration without a break for one volume, really thank you very much. Each and every character designs, which goes without saying, the facial expressions and gestures are cute. Especially, the destructive power of frontispiece of Est is tremendous. And then, Fianna in the front cover is very … ero-cute!

The black panther (in the meaning that his coat has a leopard-design) Koto Shouji-sama, I've always been grateful to you. I've really already ran out of gratitude words. I also look forward to working with you on the organizing of the team battles!

Chief editor Misaka, proofreading team, binding team, sales teams and the bookstores, really thank you for everything. Especially, the new retailers Anibro Gamers, who had done the hot unfolding of a blade dance roadshow. I had the privilege of seeing it personally, and was overwhelmed by its force. Thank you, thank you.

Everyone, who sent in questionnaires, I've carefully read your thoughts. It was truly encouraging, so, I'll happy if you send them one after another!

I'll also keep at it writing for volume three, so thank you very much.

The battle with pollens is from here on! 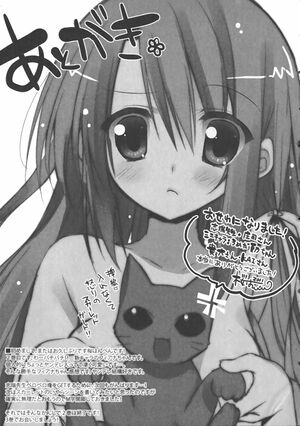 Nice to meet you, or perhaps, long time no see, this is Sakura Hanpen!

This is the 2nd volume, Wah, *Clapping*!! This is the new character, Fianna-chan.

Personally, she has a little yandere in her, and is very cute...

That's my own impression of Fianna-chan. I quite like yandere.

In order to get the right to lick Shimizu-sensei, I'll also do my best the next time...!

I thought of trying to draw Scarlet's naughty scene next, but

I thought it was really impossible, so I had her made the M letter with her legs spread out!

Well then, just like this, the second volume had ended!

Let's meet at the third volume!