---Kamito, I am your sword. Your wish is my command.

And with that, it has been a three month silence. This is Shimizu Yuu.

The elemental fantasy "Seirei Tsukai no Blade Dance" has reached its fifth volume!

One night after the difficult fight with Muir from the <Instructional School>, Kamito loses Est and falls into despair. The ojou-samas attempt to cheer (through ecchi means) that Kamito up. The <Blade Dance>'s real battle starts while he still hasn't recovered Est. The mysterious Ren Ashbell. The awakened dragon knight, Leonora. And the truth about the legendary <Demon Slayer>......!

In this fifth volume that touches upon Est's past, I've also packed in plenty of the battle x love comedy attributes!

Announcements. I was lent a small section in the anthology of MF Bunko J's extremely popular "Boku wa Tomodachi ga Sukunai," "Boku wa Tomodachi ga Sukunai - Universe" (It goes on sale at the same time as Seirei volume 5). Sagara Sou-sensei, Yuuji Yuuji-sensei, Watari Wataru-sensei (and around fifty others), with such wonderful professional writers and the creator of the original work, Hirasaka Yomi, it feels like the tension is high. For fans of "Haganai" or the author, please give a it a read. Sakura Hanpen-sensei's godly cute illustrations are also included.

Yoshihira Zenzai-sensei who is drawing the manga. Truly, thank you for drawing such a high-quality masterpiece. Claire with her hair flitting about is cute.

MFJ's hyper media producer, Shouji-san, I caused you a lot of trouble this time as well.

And the greatest thanks goes to you who has this in their hands!

The other day, a signing event was held and it made me very happy to be able to talk with those who read "Seirei".

Seeing the impressions on the online questionnaire spur me on. By the way, the knee socks spirit Est made a comeback to first place in the fourth volume popularity vote. Rinslet-ojou-sama moved from sixth to second place. Could this be the era of Est and Rinslet......!?

---With that, next time is volume 6. Let's meet again in "The Strongest Blade Dancer (tentative)"! 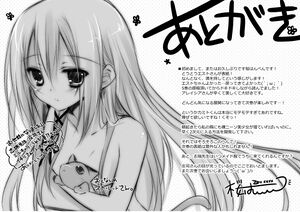 Good to meet you or long time no see, it's Sakura Hanpen!
Est finally gets a cover illustration!
Somehow, I have a satisfied feeling!
I'm so glad......Est-chan returned (´; ω ;`)
When I read the volume 5 manuscript, my heart was racing!
I really liked the heart-breaking beautiful Areishia-san.

Look forward to the next volume that's slowly building tension...!

Or rather, Kamito's really popular, huh.
I want him to explode! Damn it!

I'd really like to wake up next to a naked bishoujo in knee socks.
Somebody please quickly invent a way to travel into the 2D world.

Well then, I'll stop around here!
The next volume's cover might feature someone unexpected!

Also, Shimizu-sensei, when will you come to my house in maid clothes?

Shouji-san's eyes are glowing, so I'd better stop here.
Let's meet again in the next volume~ (´ω`)ノッ