--Let me demonstrate to you the swordsmanship of the Strongest Blade Dancer!

Thank you for your patience, I am Shimizu. This time, I bring to everyone Seirei Tsukai no Blade Dance's seventh installment, "The Strongest Blade Dancer" where love and battle developments are advancing rapidly!

Going all out in a full offensive strike, Team Scarlet had defeated the strongest enemy, Nepenthes Lore. However, Kamito's usage of the Strongest Blade Dancer's swordsmanship during the battle began to arouse suspicions in Claire and the girls. "--Are you trying to hide something from us?"

In this situation, for the sake of acquiring the Darkness Queen, the Alphas Theocracy's Demon Caster schemed in secret to manipulate the Quina Empire's powerful Four Gods team who issued what appeared to be a declaration of war to Kamito's team.

Fianna, troubled over her own lack of power. And the leader of Team Inferno who finally revealed her true identity.

In addition, there are the feelings the young maidens invested in the winner of three years ago, the Strongest Blade Dancer --

Next, let me announce some major news. Starting in early summer of 2012, Seirei Tsukai no Blade Dance's manga adaptation will start serializing in Monthly Comic Alive! (scatters petals in the air♪)

In charge of illustrating the manga will be Hyouju Issei-sensei who did the manga for MM. On the left here is the illustration for the serialization announcement. All the characters are so cute and cool looking here. I'm really looking forward to Hyouju-sensei's renderings of the intense battle scenes! 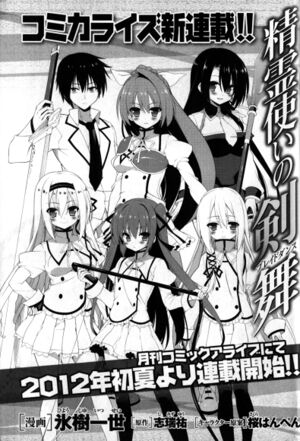 Next we have the usual acknowledgements. First of all, let me express my utmost thanks to Sakura Hanpei-sensei who brought to everyone these beautiful illustrations once again. Ren Ashbell on the cover is truly too adorable. It's making something awaken in my heart like the birth of a mini-universe.

Next I would like to express my sincere thanks to the super editor, Shouji-sama, who remains bravely supportive of my work even if it might flag him as a surveillance target by the state. (*If he starts wearing leopard print clothing, I'm sure he really will be questioned on what his job really is.)

Of course, the greatest thanks of all goes to all the readers who have supported this series.

I am truly thankful for the readers who have returned the survey and offered words of encouragement. Sakura Hanpen-sensei and I are overjoyed. Compared to the past popularity polls, the darkness spirit Restia who appeared in Volume 6 has exploded in popularity. Currently, the two great spirit supporter factions of Est and Restia are battling intensely for the top spot on the popularity ranking. Ladies of the Academy, please try your best!

--Well then, let's meet again in the eighth and next installment, "The Night Before the Finale (Tentative)"! 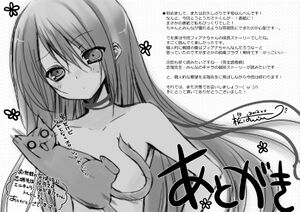 Welcome to newcomers and welcome back to everyone else, I am Sakura Hanpen!

This time, Kamito finally makes his appearance on the cover!

Even I was completely surprised by the unexpected cover!

I had been worrying about whether I would be able to depict the kind of mood worthy of everyone's admiration.

But actually, this volume is more about the story of Fianna-chan's growth.

Personally, I think the critical member in battle is actually Fianna-chan--

Although I already considered its possibility early on, I never expected the raising of such an avant-garde flag! I'm really looking forward to it... So cool and stylish...

I really want to see the next volume as soon as possible... (Totally became a reader)

Shimizu-sensei... I really want to read the stories about the various characters...

So, with these personal hopes delivered to Shimizu-sensei, this volume reaches its conclusion!

Thank you all for reading!