Chapter 3 - Upheaval in the Theocracy[edit]

—The scene enacted there was hell on earth.

"Please stop, royal sister! You must not advance any further!"

Scorpia—According to legends, the demon scorpion palace used to be Demon King Solomon's residence. It was now being assaulted by hundreds and thousands of demon spirits.

Fighting alone inside a bloodstained hall was the Alphas Theocracy's second princess and general of the hierarch's royal guard, Saladia Kahn.

However, heavy despair filled the face of this young girl who had only reached sixteen this year.

She was holding in her hand a grimoire.

"Oh my, you're looking energetic, my dear Saladia—"

The witch's lips were distorted in a grin of mockery.

She knew that her twin younger sister was bluffing.

—Several hours earlier, the eldest princess, Sjora Kahn, had suddenly led two hundred cult troops and taken over Scorpia. The soldiers guarding the royal palace were crushed helplessly by the onslaught of the demon spirits. The militarized spirits controlled by elementalists were devoured completely before they could bring out any of their true worth.

The Theocracy's royal guard were no pushovers. Led by Saladia Kahn, these elementalists guarding the palace were all experts who could each take on a thousand.

However, they were all defeated in quick succession before they could even release their elemental waffen.

The summoned contracted spirits were all in disarray, baring their fangs at their own contractors.

Similarly, the countless spirits summoned by Saladia Kahn started slaughtering one another.

While this hellish scene repeated nonstop in the center of the great hall, the witch walked leisurely.

Further ahead from the hall was the throne. Naturally, Saladia could not allow the witch to advance any further—

But with knees trembling, she was rooted to the spot. The witch's serpentine eyes pinned her down.

(...That's not my elder sister Sjora. It's a monster that will devour the nation!)

With a trembling hand, Saladia drew the scimitar from her waist.

With a mighty yell, she charged at the witch.

"Oh dear, you really seek death that much?"

She dodged the blade lightly and punched Saladia in the gut.

The Theocracy's princess general moaned and spat out blood.

At the same time, Sjora picked up the scimitar—

"Foolish sister. Despite the fact that you have never wielded a sword before."

The amber eyes were filled with hatred as the girl glared at her elder sister.

"Fufu, of course I won't kill you so easily. Because you are still useful."

The witch stepped over Saladia, collapsed in a pool of blood, and continued towards the throne.

"—I have returned. Hierarch."

She pointed the scimitar at the old man on the royal throne.

Next, a hoarse voice echoed in the great hall.

"A snake's child is ultimately a snake. Letting you live was evidently my greatest blunder."

Dressed in a crimson robe, the old man spoke with bitterness in his voice.

Despite having passed the age of eighty, the old king's gaze still had not lost its sharpness.

He was the tough warrior who survived the two Ranbal Wars despite the Theocracy's location, surrounded by the Ordesia Empire, Dracunia and other powerful countries.

Bloody conflicts between clan members were nothing rare. Nevertheless, he had crushed countless enemies along his path, stepping over numerous corpses, remaining in power to rule this Theocracy in spite of its political instability.

But right now, the witch was pointing a murderous blade at his throat.

"—You have no right to sit on that throne."

"And you do? Cursed snake woman—"

Sjora laughed in mockery and swung the scimitar horizontally.

Throat slashed, the old man fell from the throne as a corpse.

"—This throne was mine in the first place."

Sitting down on the bloodstained throne, the witch snapped her fingers.

"Find the surviving royals and throw them in prison. Kill anyone who resists, I don't care. Oh, but don't kill any princess maidens, or the princess general fallen over there. Accomplished elementalists still have value for certain uses."

"...Doing this, royal sister, what are you planning!?"

Collapsed in a pool of blood, Saladia yelled.

"The continent's various nations will condemn this coup d'etat. Royal sister, you have provided the wolves with a perfect pretext to invade the Theocracy!"

Suspected of connections to the Demon King cult, the Alphas Theocracy was frequently decried by neighboring countries. In spite of that, it had successfully remained free from large scale invasions owing to the diplomatic prowess of Rajihal Kahn—the hierarch who was now lying dead before the throne.

"I am the one looking for a pretext. I want to ignite the fires of war on this continent."

"Kukuku, need I spell it out? It is the Demon King's mission!"

Muttering in shock, the second princess was arrested by the cult troops.

After the cult troops were dismissed, in the king's room where there was no one else—

Suddenly, a figure appeared from the darkness.

Making an appearance was a cute young girl, roughly twelve or thirteen in age.

Blonde hair of dazzling golden luster. Violet eye color carrying an air of mystery. However, it was a lone eye—the left eye was covered by a simple eye patch.

The girl was wearing sacred vestments of pure white resembling what was worn by priests serving the Holy Lord.

Several months earlier, she had been sent to as a diplomat to the Theocracy to make contact with the Demon King cult within its borders.

Through her, the Demon King cult had obtained financial support from the Holy Kingdom.

"Personally, I am utterly disappointed. To think that the residence of the Demon King who once shook the continent would fall so easily—"

"Without being able to use spirits, even the royal guard is nothing."

The girl reached to the eye patch on her left then exposed her left eye.

Inside the clear, violet eye, horrifying darkness was squirming restlessly. 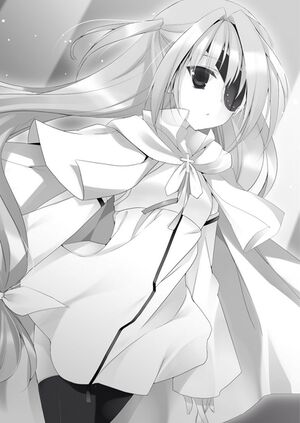 "Residing within you is that darkness not of this world huh."

—Indeed. What made the royal guard and Saladia's spirits go mad was this girl's eye.

The demon eye of pitch black, causing everything within its sight to go insane.

Madness brought forth ever more madness, filling the entire palace within the blink of an eye.

"True darkness that caused the Elemental Lords to go mad. Bathed in such darkness, the only ones capable of remaining unaffected are demon spirit minions that are mad to begin with—"

Smiling in this manner, perhaps this girl was the maddest one of all—

Sjora commented sardonically in her mind.

(—The cardinal sent by the Holy Kingdom huh.)

This girl was definitely not acting alone. Most likely, she was backed by the Holy Kingdom's highest decision-making agency, Des Esseintes.

"The reward you seek—No, the Holy Kingdom's reward are militarized spirits, right?"

"—Yes. The Theocracy's strategic-class militarized spirits, seven of them, more or less."

"—Seven huh. Certainly no lack of greed there."

"Elementalists are not needed. Furthermore, new Hierarch, you must have confiscated all the militarized spirits gathered by Rubia Elstein, haven't you?"

"Hmph, your investigations are quite thorough..."

Rubia Elstein had sent combatants originating from the now-defunct Instructional School, such as Jio Inzagi, to various ruins in an attempt to build up her own personal army.

However, Rubia's ally, the Demon King cult had betrayed her and taken possession of the militarized spirits and the Instructional School's assassins.

"A number of them were broken by Muir Alenstarl's use, but even so, Rubia Elstein should still have a number of militarized spirits, right?"

"What is your goal? The Holy Kingdom's dog?"

Sjora stared down sharply at the young girl.

"Hierarch-sama, are you aware that the Burial Chamber has manifested underground at Areishia Spirit Academy?"

A special dimension where the Demon King's weapons and the seventy-two spirits under his command were sealed.

Manifesting in the world upon the Demon King's awakening to confer upon him the power to rule the world.

"Excuse my impudence. Then the same goes for the matter of the Demon Slayer being sealed in the Burial Chamber?"

Originally not the Demon King's possession, now that the Demon Slayer was kept in the Burial Chamber, this meant that the burial chamber had recognized Kazehaya Kamito as the legitimate Demon King.

(...As much as it infuriates me, there is nothing I can do about it for now.)

Currently, he was nothing more than a mass of obstructing thoughts possessing Sjora Kahn's body.

As for the Demon Slayer becoming the Demon King's personal sword, that was quite ironic—

"—My lord seeks the Demon Slayer."

"Hmph, what does the Grand Master of Des Esseintes want with that thing?"

"None of your business. Hierarch-sama."

Millennia smiled... Apparently with no intention of answering.

"Hmph, so be it. But then, how should one steal that sword spirit? It is the highest level sword spirit after all, despite its incomplete state. Even my Bandersnatch cannot steal it."

"Kazehaya Kamito is currently in a state of amnesia. In other words, his connection to the sword spirit is suspended."

If Kamito was unable to make the sword spirit manifest, then there was the possibility of stealing the sacred sword's physical form that had materialized in the Burial Chamber. However—

"The Burial Chamber manifested underground at Areishia. Its surroundings are covered by the unassailable spirit forest, with defensive barriers of the highest class and guardian spirits. The town at the foot of the mountain is also garrisoned by a standard Ordesian army. Even using seven militarized spirits, that stronghold cannot possibly be conquered."

"Worry not. Even the most secure stronghold will be fragile in the face of an attack launched from within. The eye of Des Esseintes is omnipresent."

Millennia Sanctus licked her lips and smiled with a chuckle.