Baka to Tesuto to Syokanju:Volume11 The Ninth Question

Please state the name of the compound in the picture.

I get the feeling that I am seeing some telephone game here.

Slapped on the backside by papa.[2]

I get the feeling that I am seeing the end of some telephone game here. 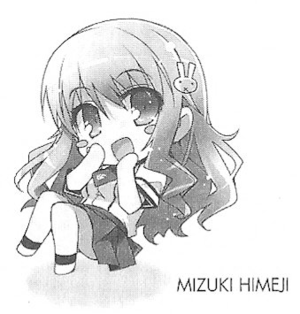 We run out from the new school building, with Muttsurini leading, Himeji-san and Yuuji next, Hideyoshi and Minami, and me at the back.

“Got it! It’s the Health Education territory!”

“Good! I’ll leave it to you, Muttsurini!”

The moment Muttsurini puts a foot into the field, “…Summon”, he says softly and calls out his summoned beast.

And just when he’s waiting for the enemy to swing,

DONK! A loud thud rings, and the enemy rank’s broken through in one go.

A summoned beast and its controller appears from deep within the broken enemy ranks.

The one opening a path right in front of us is the expert in health education who’s second only to Muttsurini, Kudou Aiko.

All of us run through the path Kudou-san opened for us.

And then, there’re other 2 A class members on the path we’re headed to.

“It’s really good that you people are fine, Yoshii-kun.”

“Okay! Hurry up and run through!”

The three people who have considerable marks even amongst the second years are here to help us. This certainly is reassuring!

Those two’s overwhelming scores are shown.

The summoned beasts of Kudou-san and Muttsurini open a path in front of us, while Kubo-kun and Kinoshita-san are on the side supporting us. In this formation, we have a penetration ability that can’t be stopped.

It’s thanks to the three of them helping that we can possibly break through the field easily. The enemies are far fewer than what we expected.

Just when I’m thinking about this, Kinoshita-san, who’s running beside us, says,

“No! We’re the ones who need help here!”

Aren’t we the ones saved?

“Kinoshita, this situation you say, does it have anything to do with the enemy’s formation now?”

“Prez insists ‘I’ll act as bait, please go and save F class’, and wouldn’t listen to anyone at all…!”

“Wait! Isn’t this a reversal of priorities here!?”

We’re just a single group here, and Kirishima-san’s the general. Obviously, we’re fighting so that Kirishima-san’s not beaten by the enemy, but she’s coming onto the frontlines to save us. There’s definitely something wrong with this.

“Yoshii-kun. Kirishima-san won’t listen to us no matter what we say.”

“Wore her out enough.”

“Once we beat her, this battle will be over!”

She dodges the first sword strike, parries off the second spear thrust with her sword,

She’s unable to dodge the 3rd axe dodge, and loses her balance.

My attack manage to catch up right in the nick of time.

“Thanks, Yoshii-kun. Allow me to take over here. Please hurry and retreat with Kirishima-san—summon.”

With Kubo-kun taking over me, I use this opening to forcefully grab Kirishima-san’s hand and pull her away.

After that, Hideyoshi and Minami follow us by the side, solidifying our formation. There’re no signs of enemies around us, and now we managed to avoid this crisis—though this is what I think,

But Kirishima-san swings my hand away and stops.

“What’re you saying now, Kirishima-san!? If you lose here, everything will be over! Shouldn’t you be waiting at somewhere safer?”

While Kinoshita-san and I are still trying to bring her back to the old school building, Kirishima-san merely lowers her head at us and says,

What do you mean by being able to fight on? Though you do have enough scores…

“…I must at least take down B class and balance our fighting strength.

Upon saying this, Kirishima-san continues to stubbornly head towards the frontline, and is immediately scolded by Kinoshita-san.

Kinoshita-san lets out a voice that clearly shows that she’s at her limit.

But, as compared to Kinoshita-san’s voice,

I can’t help but look at her expression.

“…He said he’ll give Koyama the answer, after the summoning war…the moment his promise with me is no longer in effect…”

Kirishima-san lowers her head as she says this. Large bead-like tears can be seen in her eyes.

Upon hearing the name Yuuji and Koyama-san, I remember Koyama-san’s posture when she approached Yuuji, saying ‘I like smart guys’.

In my mind, I try to think of why Kirishima-san’s crying.

Yuuji made a certain response to Koyama-san who approached him, and that would be after the summoning war ends, once his promise to go out with Kirishima-san’s over, In other words, Yuuji’s completely free.

Once he gets his freedom, he’ll respond to the confession. Upon hearing this, there’s one conclusion that can be simply made.

“…I already knew that Yuuji didn’t choose me, but Koyama…”

And so, Kirishima-san must be having this thought, ‘Yuuji’s taking part in this summoning war to break up with me and go out with Koyama’.

“…In this case, I must at least…just once, get him to say that he loves me…!”

Kirishima-san continues to let her tears flow out and drip to the floor.

In my mind, the reason as to why Kirishima-san’s acting so impulsively finally appears in my mind.

Kirishima-san thought that Yuuji will abandon her—so she wants to hear him tell her that he loves her once, even until the end; she’s working hard for this aim.

Minami and Himeji-san, who’re nearby, must have gotten a rough idea of why this is happening, and turn to talk to Yuuji.

This is a case of personal feelings; there’s no way to force someone into saying that he or she loves someone. Besides, only the person knows whether the love truly exists. Even if it’s said out with false feelings, it’ll just cause damage on both sides.

But even with that little amount of feelings, she naturally hoped to hear him personally say this. Even if this wish can’t be fulfilled, she hopes to get a reply.

I too call out to Yuuji.

Then, he slowly walks to Kirishima-san, and says with a calm voice,

“I have a plan. Please give me the authority.”

Upon hearing these words that cause us to doubt our ears, everyone present widen their eyes.

“Hold it right there, Sakamoto! Stop acting so snobbish here!”

“Sakamoto-kun! This is too much! I really can’t believe you’ll do this!”

“Even I can’t accept that just now!”

The girls let out strong objections at Yuuji. This is to be expected; he’s really the lowest of all humans for saying such a thing after what happened just now.

“I’m mistaken about you, Sakamoto! If you hate her to this extent, you should have said so right from the beginning! You’re still being so indecisive even at this moment!”

“Prez! You should just forget about this worst of the worst scumbag! There’re many good men on this world!”

“Sakamoto-kun! Hurry up, change your words and apologize!”

The girls continue to tell him off harshly.

In response to these blaming calls, Yuuji merely uses his unique clear voice and growls back at them firmly.

“Seriously, you guys are too annoying!”

He seems to be venting out the frustrations he had for a long time.

And then, Yuuji continues to say as if he’s protecting something most important to him.

“I waited for 6 full years already! Can’t I just finish this confession according to my plan!!?”

Upon hearing these words from Yuuji, everyone present widen their eyes again.

Waited for 6 years…? Finish according to my plan…?

I repeat Yuuji’s words in my mind and digest it carefully.

After thinking about it for a while, I finally understand the entire situation.

Now this explains things; why Yuuji won’t confess to Kirishima-san up till now, why he won’t say that he doesn’t like or hate her.

It’s nothing big. Yuuji already thought of how he’s going to confess to her, so even if he has to lie to her, he still doesn’t want to say the word ‘like’ at this moment.

After me, Himeji-san and the rest are starting to understand the situation too.

They probably feel awkward here as their faces are starting to turn red. Un un. I don’t know why, but for some reason, such things from those we’re familiar with makes us embarrassed. I understand it very well.

While Hideyoshi and Muttsurini are looking like they’re enjoying themselves as they ridicule Yuuji, a completely red-faced Yuuji growls at them.

Well deary me. I thought I understood this Yuuji very well, but I’m really surprised that he has such a side to him.

And after finding out this side to him, I’m able to see many more things.

“I say, Yuuji. Do you have the idea that ‘guys have to be the one confessing’?”

“Nothing at all. It’s just that I’m starting to vaguely understand why you’re so insistent on having the summoning war against Kirishima-san now.”

We had a summoning war against A class at first because of other reasons. After failing in that battle, Yuuji had no choice, and ended up going out with Kirishima-san.

And then, after spending half a year together, that guy must have gotten a clear answer in his mind already.

“You didn’t want that kind of relationship, but to start building a new relationship from your side?”

“Fm…that’s why Yuuji wanted to win the summoning war. He wants to get back that white paper in the promise, right?”

Yuuji suddenly puts me in a full-powered chokehold. Haha, I see! No wonder he doesn’t want to explain the details of this now!

“—Th-this seems to be the case, right, Kirishima-san?”

I turn the topic to Kirishima-san, who hasn’t been showing any response up till now.

And then, Kirishima-san, who’s standing at where she is, lowers her head.

Her eyes are letting out large tears again. Eh!? Why!?

Kirishima-san’s not letting out tears of joy, but tears of anguish in her heart as she starts apologizing.

“Ki-Kirishima-san. Why are you crying!?”

I don’t know why she’s crying, and can’t help but panic.

And she just continues to cry in front of us like this.

“…Because…if this kept up, we’ll have lost…! Everyone’s…working hard, but because of me…!”

I immediately understand everything in this single line. It seems that Kirishima-san’s blaming herself for how this summoning war has become like this.

She continues to cry as she apologizes.

Yuuji pats Kirishima-san on the head while she’s like this, and says, 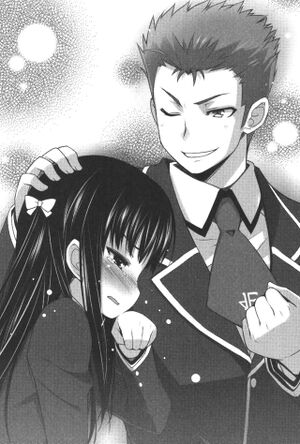 His face is showing a confident smile that makes everyone relieved upon seeing this.

“Because I know you’ve been working hard.”

To Kirishima-san right now, there’s probably nothing more reliable than this.

Yuuji replies my dig with a dig of his own. Yes yes, that’s how it is, huh?

“So now, how do we continue with this battle?”

“It’s nothing. This time will be the same before. Let’s reverse this little disadvantageous situation at one go. We’ll do what we always do, it’s just that simple.”

“Such nice words there. We always manage to win barely here, you know?”

Really. What kind of nice tone is this? He’s always trying to suck up to others like this when it’s convenient for him.

“Let me say this first, Yuuji. This isn’t for you, but for Kirishima-san.”

“That’s really great. I’ll be really disgusted if you say that you’re fighting for my sake.”

The first day of the summoning war against the 3rd years was our loss.

But unbelievably, there was no restlessness left in our hearts at all.