Baka to Tesuto to Syokanju:Volume1 The Eighth Question

Aren't you a bit too hasty? 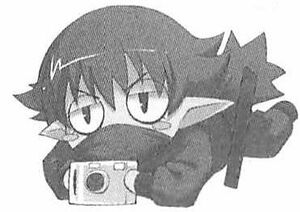 "It is called menarche, the first period a female ever has. In medical terms, a period is called a menstrual period. Menarche is closely related to age and weight factors. It usually appears when the female's body weight reaches 43 kg, but the age differs between each individual. In Japan, the average age is 12 years old. There are other factors besides weight, such as race, weather and social environment that will affect the time when menarche occurs..."

You wrote too much.

"Akihisa, you are really desperate!"

This was the first thing that Hideyoshi told me after the war ended.

Anyway my hand was really hurting. Although not all the force was bounced back to me, the pain that was generated by destroying the wall barehanded was not a joke.

"This sort of strategy...really suits you."

"D-Does it? Don't you think you should praise me more?"

"This is a manly and amazing operation that forces yourself into an extremely dangerous situation and then makes use of the sense of crisis to complete it."

Destroying the wall in school was not a small matter. I was forced to stay in the teacher's office to receive psychological counseling. If this wasn't my first school misconduct, I might not have been able to go up to the next grade, or might even have been kicked out of the school.

"Well, this is the strength of Akihisa."

Being idiotic is my strength? That is not something to be proud of!

"Now, let us start the meeting that make some people happy but also humiliate others. What do you think, Loser Class Leader?"

Nemoto, like a balloon without any air, quietly sat on the ground.

"Originally, I planned to take the equipment from your class, and then give you the pretty little Japanese style tables as presents. However, I could give you a special deal, which allows you to escape this punishment."

Yuuji's announcement seemed to cause some unexpected reactions.

"Calm down, everyone. I have said it before, our target is Class A. Our goal is not here."

"This place is just a transition point for us. So as long as Class B agrees to our conditions, we shall spare them for now!"

Everyone in my class showed that they understood what Yuuji declared. Yuuji had said something similar when we were fighting Class D, so our classmates also understood him much better.

"The condition is related to you, Loser Class Leader."

"Yeah. This time you have used enough of your dirty tricks, and to tell the truth, I have disliked you since last year."

Although what Yuuji said was impolite, Nemoto really did what Yuuji said, so no one jumped out and helped him. And he seemed to understand his situation as well.

"I will give you, Class B, this one and only special chance."

Yuuji added what I asked him to get yesterday morning into the condition.

"Go to Class A and tell them, Class B is well prepared for a Test Summoning War. If you do that, I won't take your class equipment away. However remember not to declare war against Class A; or else you will not be able to avoid the war. All you need to do is to let them understand that you guys are planning to fight the war, that's all."

Nemoto's eyes were filled with disbelief. If this went according to the previous plan, this would be all we wanted from him. However...

"Yeah, as long as the Class B leader wears this and does exactly what I said just now, I will spare your life this time."

This is a tactic to get his uniform, but I think Yuuji also mixed a bit of his personal feelings into it.

"S-Stop kidding me! How dare you tell me to do such stupid act!"

Nemoto started to panic and was unable to talk properly; I think he really hates this!

"Class B members will definitely do what Lord Yuuji said!"

"Leave it to us! We will definitely make him wear this female uniform!"

"If doing this can protect the classroom equipment, we have no other choice!"

These were all the warm supports coming from the Class B members. From their actions, I could imagine what dirty stuff Nemoto normally did.

"Let him quiet down first!"

Suddenly, a guy from Class B gave their class leader a punch in the stomach. Even Yuuji was shocked by how fast they changed their attitude.

"Now, let's change the clothes for him. Akihisa, I will leave this to you."

I came closer to Nemoto, who was lying on the ground and starting to take his clothes off.

Although there was no other punishment worse than taking the clothes off of a guy, there was nothing else I could do since this was one of my purposes.

Nemoto made some noise. Oh no, maybe he was going to wake up soon.

To ensure he didn't wake up, I gave him another punch. After that I took his male uniform that I was familiar with, and prepared to help him put on the female uniform.

The female uniform was totally different from a male uniform. I didn't even know where to start.

When I was confused and didn't know what to do next----

One girl from Class B nominated herself to help.

"Really? Thanks for the help. This is a rare chance; give him some good make up as well!"

"That's impossible, because the foundation is already rotten."

"I will leave this to you then."

I gave Nemoto to that girl and took his uniform away from the scene.

Maybe it was around here?

I looked around in Nemoto's uniform, and finally found an object.

I took the familiar looking envelope and put it into my pocket.

Now, what should I do with this uniform? Well, I decided to just throw it away., since this was an opportunity to let Nemoto enjoy the touch and feel of a female uniform on the way home.

I thought about all these things, and walked towards the Class F classroom before everyone else returned.

After throwing Nemoto's uniform into the rubbish bin, I withdrew the envelope from my pocket.

"Now it's time to return this to its rightful owner."

I put the letter into Himeji's bag which was on the table, and the mission is now officially ended.

Suddenly, someone shouted behind me. I made some idiot scream, to my embarrassment.

I looked back in panic, and saw Himeji standing right there.

Her eyes looked like she was going to cry.

I thought she had seen me touch her bag, so I really started to panic. All of a sudden, Himeji hugged me very tightly.

The person who really doesn't know what to do should be me right? Damn! Is this the newly invented tactic that forces people to change the focus?

"A-Anyway you need to calm down first. If you cry like this I will be in trouble."

To soothe Himeji, I lightly pushed her away from me.

Ah, damn! Why did I push her away! I won't get a chance like this again!

Himeji wiped her eyes which had turned a bit red after crying.

Ah! It slipped out of my mouth! I'll be in deep trouble if I can't say something to get myself out of this!

Stupid me! I really am an idiot! Are you a terrorist? Why do you want to hit the wall again!

Yeah, I understand. I already know that. Don't look at me like that!

I felt really weak and tried to turn and run away, but Himeji pulled my sleeve.

Maybe she wanted to introduce a good doctor to me? Damn! I didn't think that what I said before would bounce back to me so soon. Why do I need to face such humiliation every single time!

"The letter, thanks for your help."

Himeji lowered her head, and thanked me with a very low voice.

"It's nothing! I just accidentally found the letter and took it out from Nemoto's uniform."

"Yoshii you are really gentle. When I needed to leave my seat during the class division exam, you also stood up and shouted at the supervisor, 'She shouldn't fail just because she isn't feeling well and needs to leave!'"

Come to think of it, something like that had happened before. Because the supervisor was too cold, I couldn't help but feel mad.

"Also, this war...was started because of me right?"

"Hehe, you can't hide this anymore, because when I finished my self-introduction, I saw Yoshii ask Yuuji out to discuss something."

She saw that we were discussing something? Then I couldn't hide it anymore.

"I am really, really happy. Yoshii you are so nice, just like you were in primary school..."

What? I can't help but feel that this situation, in this scene, is very strange. I even had a numb feeling that I have never felt before. Although I didn't quite understand what happened, I didn't like this situation at all!

"T-That letter, I wish you all the best!"

Anyway let's just change the topic for now, else this might develop to a point beyond my imagination.

Himeji smiled and answered. Looking at her smile I could not help thinking: this girl really likes Yuuji! I knew I couldn't compete with Yuuji from a long time ago. Although I didn't like it, I couldn't do anything about it.

"Then, when are you going to confess?"

Let's try to gossip a little bit, I can at least do this, right?

"Er...I think it will have to wait until everything is finished..."

"Really? I think confessing directly is much better than a letter!"

"Yeah. If I was the guy, saying it in front of me would make me happier!"

Because of Nemoto, this letter has become a bad memory. I thought this was better for Himeji herself.

My opinion might be different from Yuuji's, but Himeji looked very happy, just like she got very important advice.

"T-These clothes, the skirt is too short!"

"Don't worry about it; if you walk slowly you should be fine."

"S-Sakamoto you bastard, how dare you make me do this...."

"Stop wasting time! You have an outdoor photo shoot later, you won't make it in time if you don't hurry up!"

"W-Wait, I never heard about that before!"

Suddenly some quarreling sounds came from the corridor. It seemed that the show had started.

Now there was a new outdoor photo shoot session besides sending a message to Class A. It seems today would be a beautiful memory that Nemoto was never going to forget.

Himeji gave an energetic answer and then left the classroom. What light paces she had!

Now its time for me to return to the group.

I followed Himeji, and prepared to leave the classroom.

I walked towards Yuuji's seat, and took his bag.

I am not one of those who can congratulate a lucky guy easily!