Baka to Tesuto to Syokanju:Volume5 The Seventh Question

Please fill in the blanks with the correct answers.

“In 334 BC, having beaten the final king of the Achaemenid Empire, Darius III, (Alexander the Great) started the (Eastern Expedition).”

Correct answer. The two people mentioned in this question, Darius III and Alexander the Great had two great battes between them, the battle of Issus and the battle of Erbil. It will be best if you can remember these two battles.[1]

“In 334 BC, having beaten the final king of the Achaemenid Empire, Darius III, (Warrior of Light Arc) started the (Final Quest ~Last Crusade of the King~ ).”[2]

There’s the ‘final’ and the ‘last’ words in there, but it just doesn’t feel like it’s going to end. Really intriguing.

“In 334 BC, having beaten the final king of the Achaemenid Empire, Darius III, (Alexander the Great) started the (Eastern Expedition).”

Oh? Sakamoto-kun’s answer is the last one for F class? I think I didn’t see Yoshii-kun’s wonderful answer…did he answer it correctly? 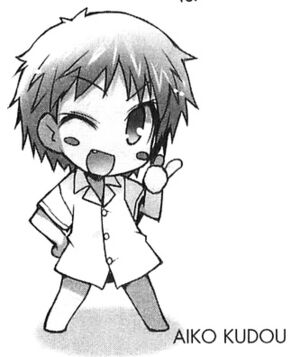 It’s finally time for the exam. Unlike usual, I was the first one to reach the classroom, and immediately took out my textbooks from my bag to begin my final revision.

“Oi, Aki, why do you look like you’re about to die? Are you alright? It’s just the first day!”

“I’m fine, I’m alright…I’m sorry, but can you please don’t talk to me now? Or else I think that what I stuffed into my brain last night will be forgotten…”

Then, as Yuuji and Himeji-san entered the classroom, I said the same thing to them.

After arguing with my sister, I locked myself inside my room and started memorizing, and I didn’t eat or drink the entire night. I don’t know whether nee-san had dinner, but I would feel sleepy if my stomach’s full, so it’s alright that I ate little.

“Don’t think too much. Better do more revision. In 334 BC, Alexander the Great started the Eastern Expedition. In 330 BC, the Achaemenid Empire was eliminated. In 250 BC, the Parthia Empire…”

I started to revise the points that I just couldn’t remember no matter how much I tried to memorize. Himeji-san said that this part may appear in questions. I’ll mark them on the test script first once the exam scripts are handed down so that I don’t forget the year and what happened then.

6 subjects are to be tested today, and in order, they are modern language, English (literacy), world history, mathematics grade two, chemistry and health education. The other subjects will be tested tomorrow. I just need to do the tests normally for the first period - modern literature - and English literacy for the second period. World history is where I have to go for the decisive. If I can get a good mark for world history, everything will be alright.

“Everyone, get to your seats. Today’s the first day of the end-of-term tests…”

Ironman walked into the classroom as per usual and simply reminded us of some things we had to take note of. There’s nothing else to really say, so the homeroom lesson in the morning ended.

There’s still some time till the test in the first period, and I continued to study. I’ll forget about English in the second period, and there’s not much to memorize for modern language in the first period, thus, I focused my revision on world history, where it would be make or break for me. Anyway, I can only memorize a bit at this point. It’s best that I can memorize everything in the textbook.

The government of the Shang Dynasty is set with society set around its capital city as politics and religion was done together. Based on research, the words back then became the oracle words that evolved into Japanese kanji…

“Alright, time to put away the textbooks. The first period’s test is about to begin.”

Just when I was focusing entirely on studying, unknowingly, the invigilator for the first period lesson entered the classroom.

I put my textbook away obediently and waited for the test script to be handed out. World history is the key to this end-of-term test, but I can’t neglect the other subjects. If I can get good grades here, I can send that damned sister of mine back overseas, and my life will be full of calm again.

“It’s not the first time sensei’s saying this, but sensei still wishes to remind everyone that you can’t put anything on the table other than your stationery. Also, if there’s any writing on the table, it may be considered as a form of cheating. Even if it’s not written by you, I hope that everyone can check it through. Also, if you leave halfway through the exam, the subject score will not be given unless it’s really important—”

I’m hearing the same things they will remind us to take note of during an exam, and received the test script my classmate handed over to me. I took one, put it on my table, and then passed to the classmates behind me.

From the options below, please choose the correct meaning of the idiom ‘Besieged on all Sides’.

1. Completely isolated. 2. Singing and doing nothing else. 3. The song of Chu being so loud that it could be heard all over. 4. The BGM all around are all songs of Chu.

This type of questions are the ones I’m good at. Amongst multiple-choice questions, I do belief that I can at least get one correct out of 5 questions. It would be great if all the questions in tests were multiple-choice, but unfortunately, in an exam, multiple choices are just a little benefit the tester would give.

Please explain the ‘it’ indicated in the sentence below in Japanese.

“‘It’ won’t take you more than ten minutes to get to your home.”

※Warning: Anyone who puts 'it' as the answer will be sent to the staff room without exception.

Since it’s ‘it’, when translated into Japanese, it will be ‘it’—danger! Nearly went to the staff room for tea. Good thing that warning was there…

But it does seem weird somewhat? Why do I feel that this warning was a mockery targeted at a certain group of students?

And so, without any serious mistakes, the first two periods of exams ended peacefully—and it’s now time for the world history test which is the most important one to me.

“Alright, everyone. We’re going to start with the exam. Please put everything else other than your stationery aside into your bags.”

The invigilator in this period seemed to be Ironman as I could hear the familiar gruff voice without even lifting my head.

“Take one test script and answer script each before passing it backwards. You are not allowed to flip the answer script until the bell rings. Understood?”

The classmate in front of me handed the question and answer scripts back. I followed Ironman’s order and took one each and flipped the test script over.

I continued to try and memorize those parts that I could easily forget before the bell rang.

And finally, the decisive moment has arrived.

The moment Ironman spoke, I took my mechanical pencil and flipped the script over. I jotted down the important notes before checking the questions. Time to read the questions carefully!

I wrote down some of the names that could be easily mixed up and what happened then. After that, I flipped open the script. Let’s see. The first question, please state the correct type of government of the Shang Dynasty…I still remember that. The answer’s ‘religious politics’. Second question, during this era, the origins of the Japanese kanji that was formed is…‘Oracle Text’. Third Question, the people then lived ___ lives—the answer here is ‘vertical pits’.

Alright! I got it! I know them all! As expected of Himeji-san’s teachings! If this keeps up, it’s not impossible for me to achieve the marks I want! Now I can finally get rid of that cold sister of mine who only brings about trouble!

I will write the answers down first, and then check through those questions I couldn’t answer before and think through it. there’s no limit to the number of questions in Fumitzuki Gakuen’s tests, and the difficulty will increase bit by bit, so there’s such questions that targets such topics. If I can’t answer those questions, I would just end up with a pile of questions I couldn’t answer, and I will waste a lot of time. So I have to answer from those I can answer. This is what Yuuji and Himeji-san taught me. Up till now, I’ve been doing each question slowly, but after following their method, the score I got was a lot different. I see. Looks like I can change my answering style.

I focused thoroughly on answering the questions. Unknowingly, the questions on the test script were almost completely answered.

The chime of the bell indicated that the test ended.

“Okay, put your pens down. Students sitting at the last row, please collect the scripts.”

I could hear the students in our class heave a sigh, and the classmates sitting at the last row followed the instructions and took the script.

“Oi, Asakura. That’s too disgusting. Hand me the script.”

“Asakura! The bell rang! Give up and put your pen down!”

Perhaps discovering that he wrong the answer wrongly, Asakura-kun just wouldn’t give up his script and got scolded by Ironman as a result. Really, how stupid. The bell rang already. Even if you find that you made a mistake, you can only wait for your punishment.

Even though I thought of that, I still lowered my head and looked at the answer script that will soon be taken away.

I quickly scanned through, but found that a certain part wasn’t right. That’s weird? This is…

Just when I was about to correct it, I wasn’t even allowed time to beg as the answer script was taken without mercy.

Ironman collected the answer scripts, returned to the podium to arrange them, and put into a bag meant to put answer scripts in it before leaving the classroom.

Unable to do anything, I could only watch Ironman leave.

“How’s your most important world history, Akihisa? Could you do them?”

Yuuji got up from his seat and walked over to me.

“Ahh, un. There’s a few careless mistakes, but it’s still the best test I had up till now.”

“Really? How boring. I was about to mock you for going all pale and trying to save yourself.”

“What are you saying, Yuuji? Really, stop kidding around.”

“Yeah. You really put in a lot of effort this time. You shouldn’t be doing worse than the last time.”

Yuuji and I exchanged looks as we both started laughing, but my mind couldn’t help but think of the world history answer script that was taken away.

I actually made such a mistake… 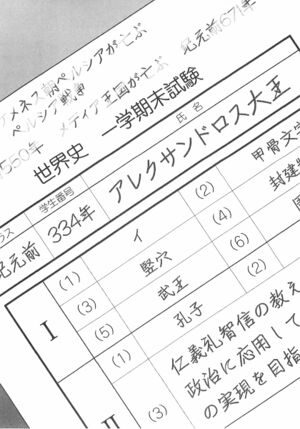