I really want to thank you for picking up this book. I’m the author of this novel, Inoue Kenji.

Unexpectedly, we’ve reached the ninth volume, and we managed to pile it up a bit. It’s thanks to everyone’s that this baka story could continue. Although I say that all the time, I really like thank the readers for their continuous support.

Unlike the last volume, this afterword is about 8 pages long, so I want to introduce some letters, mailcards and faxes the readers sent me. Actually, I really wanted to reply them all properly…

Alright, then, let me introduce the content of such letters.

“I’m a fan of Muttsurini! Since Aiko-chan said that she doesn’t love Muttsurini, create a character similar like mine to go out with him!”

There are many similar letters, and some readers even sent in some cute illustrations. I’m really happy, but I still can’t let such new characters debut, so I’m really sorry…

The readers who like Muttsurini seem to be divided into different groups. One wants ‘him to be with Aiko’, while the other group ‘doesn’t want Muttsurini to be with anyone’. I understand. If that’s the case, I’ll take the middle ground and ‘propose that Muttsurini’s a girl’. How does everyone feel about this? If that’s the case, it won’t be a question of whether he should be with anyone. It’s a good idea that can solve all this—nonono, you’re mistaken! I’m not envious that Muttsurini attracted a bunch of girls. This is just to set up a common consensus between the readers. It’s something I had to do! If you are still feeling doubtful, you can ask the leader of the FFF, Sugawa-kaichou. I think he will agree with me.

Alright, enough with the jokes. Now, there’s a lot of ‘will A be together with B’ questions. Well, I’m not really certain now. What kind of development will they have…? One letter even had this ‘I’ll give the Toko-Natsu pair to Inoue-sensei, so just let Hideyoshi be my wife’. I’ve been a member of society for 6 years, and this is the first time I heard of such an unreasonable deal.

Alright, next, it’ll be the next question. This would be a question everyone would ask me regardless of gender.

Inoue Kenji just met the biggest crisis of his life.

This is really…too unprecedented…! When I wrote ‘please promise me never to ask the meaning of these words to your parents’, I didn’t think that it would cause me to be in such a predicament…

But that’s right. Since you don’t know, and you were forbidden from asking, you can only ask the person who wrote this…

Mn, if I have to explain it…well, how should I pit it? If I have to put it, don’t they have a litmus paper test in science? A fluid’s nature is different, causing it to change colors. Using that example, it’ll be that the other pieces of paper will change color according to the fluid, but it would always change into the same color—eh? What’s that? Is it God’s punishment on me? Kami-sama…from tomorrow onwards, I’ll live a proper life. Please forgive me…

This question is like asking ‘where do babies come from’. Besides, you’ll know when it’s time, so everyone, please forget about this like good kids. Okay?

Alright, on to the next kind of letters. These are letters from readers who are aspiring to be novelists asking me questions.

“How do you think of such brilliant answers in the tests?”

“How do you come up with a story like Baka Test?”

“When would you think of such funny answers in the tests?”

There are many more like this, and also ‘the way I plan out the story’. I guess this should differ according to person, but to me, I included a lot of personal experience.

Like for example, something happened while I was dealing with a shipment from overseas.

As the meeting went halfway through, my superior started indicating all sorts of problems with regards to the foreign designs. Of course, all the prepared materials were in English, so everyone paid attention to the superior.

At this moment, the briefing included a part of my designing. So my superior turned to me and asked me.

Superior: “Inoue, did someone include the next design plan as response to this?”

My superior was talking about a investigation report on a foreign market that was written completely in English.

I wasn’t ready yet, so I got really anxious when I was called. But if I stood up to answer hurriedly, my superior wouldn’t believe me. To prevent that from happening, I then got up hurriedly from my chair and looked through the information in my hand to answer my superior’s question.

Me: (…I don’t understand what’s on the paper other than ‘this’ no matter how many times I read it…)

On a side note, as for the predicament just now, I frantically searched through the report, and managed to roughly explain the data and layout to my superior. Well, I managed to get through. My sempai told me that the most important part about designing is to ‘fulfill my talent as much as I can’. Sempai, I managed to get through this, but I feel that it’s going to hit me hard one of these days. Dear readers, please don’t be like this Inoue-sama, and study your English well.

Of course, there were many more personal experiences based on me, but love, summoned beast system, cross dressing and homosexuality were all my creation. Especially the last two points, I’ll be really pitiful if those last two points happened to me…

Well well, there’s now very few pages left. Actually, I still have lots of letters I want to share with everyone, but I’ll just leave it till next time. To the readers who wrote to me, I really want to thank you.

From now on, I’m going to talk about parts that are relevant to the story. To the readers who haven’t read the book yet, we’ll say goodbye here.

I just mentioned about the ‘way Baka Test was written’. As for the part when the hidden ball was used. Hideyoshi’s declaration that he wanted to take a bath, it was just based on a little moment when me and my friend were paying baseball. Of course, it was like a motivation tactic as we just said things like ‘I really want to bath’ ‘yeah’ that kind of thing. If I remember correctly, on one occasion, we seemed to mix in a ‘hidden ball=I want to bath phrase’, but what will happen if it happens to others? Would we be seriously bathing? Basically, not many people would come up with a hidden ball tactic.

As for the ball distribution and tactics, I’ll be really ashamed if the readers look into it too seriously. Please just close an eye with regards to this. Let’s not talk about the baseball rules, I already got a few mistakes in the baka test questions…so I’m really sorry for this…

Mn, and now for the thanks.

To Haga-sensei, who’s in charge of illustrations. My heart just danced when I took a peek at the cover illustration. Mizuki’s really too cute! As expected of the first (?) heroine in this story! The last one with Mizuki and Shouko talking together was really nice. I love it! And that picture when they forced Akihisa to go ‘ahh-’ (laughs). I’m really grateful that you would work hard to create such cute and cool pictures.

K-sama and N-sama, who’re in charge of editing, I’m sorry for stubbornly asking for many details in the ‘the rice’s the culprit part’. I guess there will be a few word and visual puns to express the humor, so please bear with me. As for the deadline to finish the script, I will abide by the timing as much as I can.

And I also like to thank the people involved in the making of the anime. It’s thanks to everyone that the world of Baka Test became even wider. I’m really grateful that you could think of so many interesting plots that I couldn’t think of. This allowed me to have a chance to learn about a world I don’t know about. It’s really interesting.

And most importantly, I want to thank the readers. Baka Test has now published 9 volumes, and I’m really happy to be able to walk down this path with all of you. I don’t know how this story will continue to develop, but I hope that everyone will continue to accompany me in this story. I’m really sorry for being unable to reply to the letters, postcards and e-mails, but I did read every single one of them thoroughly. These are my main source of energy. Thank you, everyone, for supporting me all this time. I’ll continue to work hard from today onwards!

And now, a preview to the next volume.

I think the next volume will be a short story. The content would be ‘strip poker with men’s pride on the line’ and the ‘same old yami hotpot those guys send over’ and more. However, these are just estimations. Maybe there will be more changes…if there’re really changes, I’ll like to say that I’m sorry here. I think the next volume will reach the readers’ hands pretty soon, at least that’s what I hope, so please continue to follow this story. 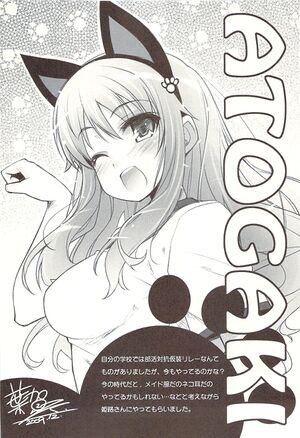