When I was young, my grandpa would often say this to me,

"Akihisa, no matter whether it's being a thief or whatever, you have to aim to be number 1. Continue to work hard and progress."

Right now, I have some things to say to my grandpa in heaven.

Gramps... I have achieved what you expected me to do--

<<RANKED NO. 1 IN 'MOST SUITABLE BOY TO BE DRESSED IN GIRL'S CLOTHING'>>

<<RANKED NO. 1 IN 'THE MOST POPULAR BOY (HOMOSEXUAL GROUP)>>

The above are the titles that the triple-champion Yoshii Akihisa-kun earned for himself.

Also nominated in the 'most suitable boy to be dressed in girl's clothing', Kinoshita Hideyoshi-kun, was barred from the competition after multiple meetings in order to avoid unfair competition.

Originally planned for the second issue 'Sugawa Ryo failed again? The truth behind all the multiple failures!' was delayed due to certain circumstances. 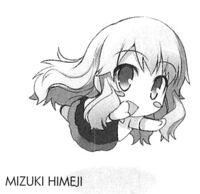