Baka to Tesuto to Syokanju:Volume5 The Fifth Question

Next, I, Yoshii Akira, will give you questions completely different from normal school tests. This does not mean that there is only one correct answer. Therefore, I hope that you guys can have more freedom and open your hearts to answer these questions. The following questions are definitely not meant to invade your personal privacy, so I hope all students can answer the questions honestly.

Q: Explain your association or experience with the opposite sex up until now in English.

Mizuki-san isn't associated with any male? That is really splendid, as a student's duty is to study.

In addition, when being used with the opposite sex, "associate" usually accompanies negative connotations. Of course it is still better than a term like "romantic overture".

While the english answer is correct, I have some doubts with the content. High School students nowadays are rather bold to be kissed while being asleep. I don't know whether my stupid little brother did that. I'm rather looking forward to his answer. 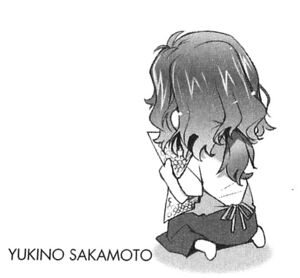 "Himeji-san, did anything happen after you went home yesterday?"

During lunch break on the next day, we gathered together at a short table. Of course, I prepared the bento for my sister's sake (This is all her fault).

Himeji-san murmured dejectedly. Of course her parents would be angry... but they have the right to be angry. For two consecutive nights, their precious daughter came home late.

"Because of this, I can't go anywhere else aside from the school until the weekend......"

This is a worry I, as a boy who lives alone (although not at the moment) cannot understand. It's really tough being a girl.

"It was your own fault. Really, at least just a call would make your parents feel at ease, Himeji."

I feel that being able to reflect on one's bad deeds is one of Himeji-san's good points.

"What on earth is this? Never mind Akihisa, didn't Yuuji and Himeji immediately go home after leaving Shimada's house?"

"Yeah, I wanted to send her back immediately. But Himeji was throwing tantrums like a kid at me, so I couldn't send her back."

Himeji said while narrowing her shoulders, making her look shrunk.

"Hmm? My parents didn't say anything, so I guess it was alright."

"You were with girls until late at night for two consecutive days, and you were also alone with Himeji-san on the street at night, right? Isn't Kirishima-san fuming?"

"W-well, it should be fine. As long as she doesn't find out."

"W-wait a minute, Shouko. You've misunderstood, what you're imagining did not happen. Moreover, you are not eligible to question me."

After that, the mail ringtone of my cell phone resounded.

I took out my cell phone and read the mail.

He must be trying to type "Help me". Thinking about this, my tears couldn't stop flowing out.

"Hmm...it would be difficult to have study sessions after school."

"That's right. Mizuki and Sakamoto aren't here, so no one is here to teach me."

Yuuji still lives on in my heart. Unfortunately, the Yuuji in my heart cannot help me to revise.

"If it's like this, do we have to stop the studying session? That's too bad..."

"I'm sorry. It's all because I went out of hand yesterday.."

"Don't be silly, this isn't your fault, Himeji-san. I'm very grateful that you're willing to sacrifice your own studying time to help me study."

At her level, Himeji-san definitely won't need to panic and start cramming when exams are near. I suppose the term capable person would refer to someone like Himeji-san.

Who suddenly called me from behind!?

I tried to avoid looking at the red liquid stuck on Kirishima-san. It must be tomato sauce or Tabasco that had accidentally poured on her during lunch.

Everyone──stay!? In short, I can study at your house for a long time? And the smartest in our year Kirishima-san's going to teach me personally! Isn't that a super-duper awesome proposal!?

That would help a lot! I didn't even dare to think i could obtain the best studying environment at this critical juncture where I have to spurt before the tests.

"Is it ok if everyone else come along?"

"If it's next week, I should be able to make it. I'll just bother you a little. Mizuki, can you make it?"

"I-I should be able to make it. Even if I can't, I'll try my best to convince my parents!"

Hideyoshi, Minami, Himeji and Muttsurini also decided to participate in Saturday's studying session. It looks like I'll benefit a lot this weekend.

"I wonder if Yuuji will participate?"

I don't think there's a problem, but since he isn't here, I can't tell.

After hearing my question, Kirishima answered in place of Yuuji.

"……By that time, he surely would be discharged from the hospital."

Everyone smiled as they nodded to each other, looking forward to the weekend.

Un Un. I'm glad everyone was able to participate.