The class representatives of the best —and worst classes have announced their engagement.

~To remove all regrets in the summoning wall~ 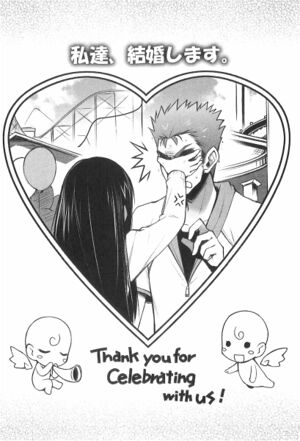 The wedding photo between Fumitzuki Gakuen’s class 2-A’s Kirishima Shouko-san (16) and class 2-F Sakamoto Yuuji-shi (16) taken at the recently opened Kisaragi Highlands was revealed. These two class representatives were trying to kill each other because of the intense summoning war that happened right at the start of the year, and knew that there is animosity and regrets between these two classes, but their wedding might become a bridge to ease the regrets and grudges between these two classes. There was also the case of the higher-ranked D class starting a summoning war against F class, so this mutual understanding between A class and F class will probably ensure that the students live a peaceful life. On a side note, this is the first time in Fumitzuki Gakuen’s history that the class representatives of the top and bottom classes are getting married.

The unexpected ‘reward of happiness’ that came with the commercialization

Kisaragi Highlands, which released this photo, explains that once both of them are at the age to marry, they will have their wedding ceremony in the ‘Kisaragi Highlands hotel, Phoenix Room’ (also commonly known as the Miso-stewed mackerel). The spokesperson of the organization was smiling as the announcement was made, saying, “Our guests came to our theme park and decided to make an eternal vow. This is really a happy thing to us, and we’ll give them our full blessings.” However, when we asked him about “There are rumors that Sakamoto Yuuji-shi did not agree to this.” The spokesperson replies jokingly, “That’s definitely just a baseless rumor. If you want to ask more about these baseless things, I’ll spray your houses with milk and send you wiping cloths a week later.” and avoids this topic. It seems that Kisaragi Highlands is using this understanding as a ‘passive promotion’ for their newly opened theme park. Kisaragi Highlands celebrated their wedding, and even prepared a full wedding for them. The preparation for this wedding would require lots of expenses, and economically, students themselves will find it hard to bear the costs, but this is just a minor thing to a large enterprise. Also, Kisaragi Highlands has received quite a few other wedding requests, and to them, this is an unexpected ‘lasting bond effect’ they have to be wrongly happy about. Based on this, Kisaragi Highlands decided not to just follow this path, but also promoted the ‘rest area to promote boy-girl relationships’. This act drove up the finances in that area, and even the households nearby have actively contributed. In this situation where the economy’s bad, the marriage between Sakamoto Yuuji-shi and Kirishima Shouko-san can be said to be a ‘reward of happiness’.

Also, there is gossip amongst the second years of Fumitzuki Gakuen that there is a secret meaning behind this wedding. Kirishima Shouko-san is the valedictorian in the year, has pretty looks, exceptional athleticism and a staggering family background. In contrast, Sakamoto Yuuji-shi is an ugly ogre who has failing grades and has a bad attitude to studying. It seems that there were rumors happening after something major happened between both of them. Rumors of how ‘Kirishima-san only has interest in girls and not boys’ in the first year only affirms these rumors. According to rumors, Sakamoto Yuuji-shi once said that ‘he raised a condition to the other side, and if that happens, he would close an eye and not request for an exchange of facilities’. There was an interpretation too that perhaps A class’ representative would have to offer herself after the summoning war if she lost to save their classroom facilities. 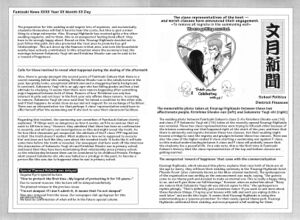 Regarding this incident, the summoning war committee of Fumitzuki Gakuen sternly explained, “If things were as dangerous as how it seems, we’ll be so envious that we want to kill him in envy.” However, they admitted that there has been no confirmation in recently, and will carry out investigations on this and might reveal the truth. As for how their classmate got suspected, the attitude of the F class’ FFF Inquisition is that ‘the truth doesn’t matter. What matters is how we’re supposed to execute him’ and does not look like they care about the revealed truth. It looks like it will take some time before the truth is revealed. Our newspaper club here went off to interview the classmates of Sakamoto Yuuji-shi and Kirishima Shouko-san in primary school, and heard that they have been maintaining their relationship since primary school, so the relationship between them can be considered to be childhood friends. Perhaps what caused Sakamoto-shi, who was hailed as a ‘prodigy’ in the past, to become a person like this was due to happened when he was in primary school.

Due to several reasons, this lecture will be delayed indefinitely.

The planned release in the previous issue

Was also removed from the issue. Our newspaper club apologizes for this wholeheartedly.

We have no confirmation of what will be in the future special column. 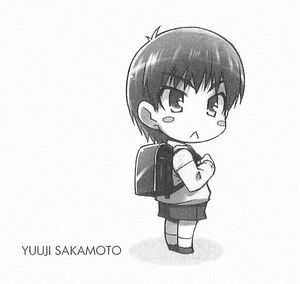