Baka to Tesuto to Syokanju:Volume12 The Twentieth Question

Please read the following passage and answer the question.[1]

Jihei asks, and Tasuke shrugs as he answers,

“To Okiku. He wants to express his 10 years of love to her with his self-proclaimed specialty of Poetry[2].”

“He wants to touch her heart by singing a love poem? I can already guess the outcome.”

Question 1: Please fill in the common saying in the blank with the correct answer and explain its meaning.

Question 2: What is the ‘outcome’ highlighted in the text? Please write down the outcome Jihei and Tasuke’s expects.

1: <Single-minded> despite being so bad at it

Meaning: It means that he will work hard for something no matter how stupid it may look

2: Sadakichi may be bad at singing, but Jihei and Tasuke expect that he will get Okiku's heart after seeing him work so hard to sing.

The correct answer here is 'overestimated himself', but your belief might not be wrong here.

1: <SIngle-minded> despite being so bad at it

Meaning: It means that even if he's not good at at something, he continues to give his all for that cause.

2: Even if he's singing the poem poorly, Sadakichi's thoughts will definitely reach Okiku.

It is a teacher's sorrow to have to mark a cross here.

The subject we're competing in is humanities. Though there's still some difference in the score, it's still within my ability to take it on.

“Akihisa, finish him off with a quick attack!”

I answer, and let my summoned beast sprint.

There's a time limit to this battle.

We can only maintain this 1-on-1 battle for a short time. Once the enemy realizes our actions and help Takashiro-sempai, it'll be all over. I have to settle this battle during the short time before reinforcement arrives.

My summoned beast swings its wooden sword down while charging forward, and the enemy raises the sword to block it. My summoned beast then gives up on pursing as it takes a step back, while the enemy quickly pursues me by taking a step forward.

“Why is it that you are still able to say such ridiculous words even at this moment? If you are really thinking about this for her own sake, you should back down!”

The sharp blade stabs forward, aiming right at my center, and I use the wooden sword to block the tip, tiptoeing aside to dodge.

“Have you forgotten how you answered the question I asked?”

“Yoshii Akihisa-kun. When a person with ability, but is unfairly treated, tries to get back the position he deserves, will you step in to interfere?”

How can I forget? At that time, I answered 'no'. Right now, this thought still hasn't changed. It's because of this that I was so troubled, that I kept thinking.

“I won't let Himeji-san do this if she doesn't want to go overseas.”

I continue to parry the quick sword stabs as I dodge.

And then, I attack back, only to be blocked.

“What nonsense are you saying...? She cannot possibly hope for such a thing...! The worst, 4th rate facilities is not worth comparing to the best treatment overseas!”

I thought this way too. There's a vast difference in studying environment between these two.

But these are what Takashiro-sempai and I think. It's different from hers.

“Himeji-san said that she doesn't like to say farewell, and she said that she wants to be here. In that case, I rather she stay here than go overseas to study.”

“That is just a lie said to you because she wants to console you...or sympathy. Why do you not understand!?”

At first, I was skeptical too, that Himeji-san said something different from what she really thought so that she wouldn't hurt me, because she's so kind.

But this line did come from a girl who summoned her courage to confess to me. If she doesn't like me sincerely, she couldn't possibly confess. This can't be sympathy then.

“How can I doubt her!? I believe in Himeji-san's words!”

She said that she likes F class, and that's why she's able to work hard.

She said that she likes me , and that's why she wants to stay here.

I'm no longer doubtful about these words. I believe in these words, and I'll give my all to fulfill her wishes and my thoughts!

Takashiro-sempai's summoned beast leapt backwards to pull the distance. It seems that he has given up on beating me personally and has chosen to wait for reinforcements, which will definitely assure his victory.

I stab my wooden sword, swing down, swing horizontally with all my strength, but the enemy's summoned beast continues to persist in defending itself, so I'm unable to hit him.

Using the chance presented when my summoned beast missed its attack, the enemy immediately leaps away to pull some distance between us.

My summoned beast gets into a lunging position to close the distance, and charges forward to attack.

The enemy focuses its strength in its feet, wanting to use the same method to dodge.

“You will not be able to hit me, Yoshii Akihisa-kun.”

The enemy mocked me.

Won't be able to hit him? How's that possible? I still have...something!

Takashiro-sempai widens his eyes in shock once he saw me activate my platinum bracelet.

The last time I lost to Takashiro-sempai, it was because the summoned beast couldn't move because of the bracelet's malfunction, resulting in a slight delay. It's an extremely short time, just that short moment as compared to the entire battle.

But I'm going to give my all in this instant!

The enemy was blocked by the second summoned beast, and gave up on escaping.

Having deduced that it can't possibly defend against attacks from two summoned beast, the enemy throws its sword away and does a karate chop. It looks like he wants to use that move he used to stop me just now.

I recall the pain and agony my body suffered back then.

“I am going to let you roll about in agony!”

The enemy stabs a hand blade—a karate chop. Pain and agony close in on me. My summoned beast couldn't dodge it.

But I don't feel fear in my heart.

My summoned beast continues to charge forward in the face of this pain approaching me.

I got help from a lot of people.

Those guys from my gang, Hideyoshi and Muttsurini, and I'll just add a Yuuji.

It's because I got everyone's help that this battle is made a reality.

The enemy's chop stabs into the abdomen of my summoned beast, and a sharp pain races through my nerves.

I grit my teeth to push this pain aside.

Right. If I say that there's a moment I definitely mustn't lose in my life,

I endure the pain in my abdomen as I let the summoned beast step forward.

In front of me is Takashiro-sempai's summoned beast, unable to move because of that outstretched hand.

The enemy has no way of dodging my attack now.

Takashiro-sempai murmurs as he watches the lunging wooden sword, and yells with all his might.

The wooden sword stabbed through the enemy's throat.

I then slam the enemy to the ground, not giving it any strength to jump or dodge.

The enemy's summoned beast falls flat, remaining still as it looks up.

And then, it disappears silently.

Takashiro-sempai collapsed on the floor.

I turn to that familiar bad friend of mine, I see him raise his chin at the audio equipment.

I follow his instruction, approach the audio equipment, and switch on the power.

Once I check that there's noise in the speakers, I take a deep breath, and hold the mic tightly.

I can hear the cheers of victory from downstairs.

The battle between the 2nd and 3rd years draws to a close.

I switch off the power to the speakers, heave a little sigh to relax myself since I'm feeling tense.

The exit door was pushed aside, and someone runs up to the roof.

Fresh snowy white skin, with a light tint of red.

Long, soft silky hair reaching her back, dazzling under the sun.

Her eyes look as if they can absorb me in as she stares at my eyes head on.

The girl I had fallen for before we formally met was already standing there, panting.

“Aren't you supposed to be in the detention room—”

I subconsciously mentioned the first thing that entered my mind.

“What're you saying? I'm the one who really likes you, Akihisa-kun?”

And then, she shows the best smile ever on that face that was more beautiful than the time when we first met.

“How can I possibly sit still when you said such words?”

She leaps at me happily while I'm looking surprised. 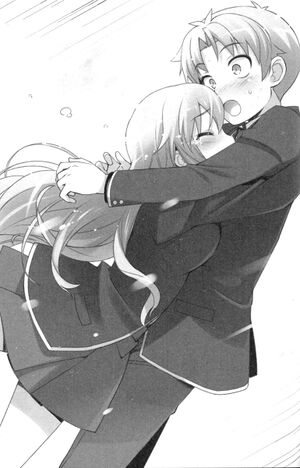 Me hating that her hard work wouldn't be rewarded was just my secondary reason.

My motivation was actually much simpler—from the first time I met this girl, I just wanted to see her smiling face.