Baka to Tesuto to Syokanju:Volume12 The Nineteenth Question

I no longer mark you answers as wrong instinctively once I see your name. I do feel delighted at seeing your maturation.

I instinctively marked you as incorrect once I saw your name, and since the result was as I had expected, I would not be apologizing for this. 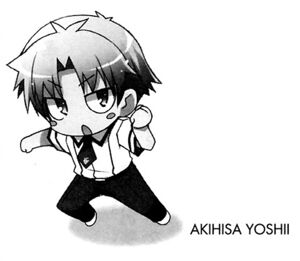 “You kept us waiting, Yoshii-kun.”

Once I finish the Japanese history replenishment tests, Kirishima-san, Kubo-kun and the rest welcome me back kindly.

Muttsurini and Hideyoshi however give me that 'you finally came back' look like usual.

I wasn't told the details of this operation, but I can more or less guess what it is after seeing everyone. The situation's so dire, yet everyone lasted till now for the sake of our victory. They did everything they are supposed to do, opening a path for this battle.

I really wanted to convey my emotions to them immediately, to thank them for supporting me, for not giving up on me—I'll leave that aside for now though.

The battle's still not over...and also, not all of us are here.

“What's next will be the final battle. Everyone's to go to the first level to lure the enemy. Once you're ready, Akihisa, go to the stairs leading to the roof. I'll make a move first.”

Yuuji calmly instructed me, and turned away, heading to the staircase.

“I have nothing to say to you. Please fight on till the end.”

“Well, you should be alright.”

And then, Kirishima-san, Hideyoshi and Muttsurini too walks down the stairs.

Minami walks to me, calling my name.

And then, she continued to stare at my face, before nodding in a satisfied manner, saying,

After hearing these words, I had to say these words I intended to say when everyone's gathered,

“—thanks, Minami. I feel a lot better because of you.”

I can't thank Minami enough. This firm-willed, cute, and kind girl really saved me to an extent I don't know of.

Maybe I should apologize to Minami for the diary and that strange confession just now. I just feel really guilty.

It's a little disrespectful to her, but I'm also glad. I'm glad that such a charming girl said that she likes me, and that she encouraged me. I'm really glad.

I really want to convey the feelings in my heart to her, to this charming girl who's filled with kindness no matter what.

“Speaking of which...you aren't going to say something like 'I haven't thought of an answer yet' with that expression, right?”

“Don't worry. Even I won't do such a despicable thing.”

The answer came out. I probably would avoid thinking about it if it was me alone, but with Minami supporting me, I'm able to get the answer.

“Then, we just have to settle this.”

Minami stares at my eyes as she said this.

And in response, I give her this one and only response,

It's really ridiculous to say that I'll definitely win, let alone since it's coming from this stupid mouth of mine. It's really hard to believe.

However, Minami shows the brightest smile she has ever given, and says,

“...Right, I trust in you. The guy I like is a little stupid—but always cool until the very end.”

Minami turns back as she sways her ponytail, and walks down the stairs.

I watch her leave from behind, and walk upstairs.

Let's go. I hope that I can live up to be that person Minami likes.

Yuuji was waiting on the 4th level, and greeted me once he saw me.

“About there. I have the strength of a hundred people now.”

“Even if there's a hundred of you, it's not going to be much.”

Yuuji mocked me. Why's this guy so rude?

“Then, what's the plan after that?”

He's still very rude, but I got to thank him for making it sound simple to me. I just used up a lot of brains cells after all.

“Speaking of which, why's Takashiro-sempai at the roof?”

“If he's going to defend against the enemy's sneak attacks, it's common to choose the roof, where the view is wide, compared to the classrooms where there are so many hiding spots.”

Yuuji and I stand at the metal door leading to the roof, waiting for the time to strike.

“Speaking of which”, at this moment, Yuuji started a topic,

“Akihisa, let me tell you about Takashiro's weaknesses. These weaknesses are something only I can tell.”

After hearing my response, Yuuji tells me in a mysterious manner,

“Alright, I'll only tell you one.”

“—that guy's most likely a virgin.”

This reply really doesn't suit the moment, and is completely beyond my expectations. It's funny because what Yuuji said is so different from the serious expression he wore, and I can't help but laugh out loud.

“...Ha...Hahaha!! That's really some weakness! He's so handsome, and looks like he does play around with girls too!”

“He may look like a casanova, but think about it. He set so many traps and ploys just to convince a girl. This isn't something someone used to toying with girls will do.”

I see, that's really the case. That upperclassman has the looks and such outstanding grades, but he's completely different from how he looks.

“If we're going to think about this, he's probably like you Yuuji, thinking about all sorts of ways to confess.”

Killing intent surges from all over Yuuji's body. I better not use this to taunt him in the future.

“Goodness...since you say it now, I'm going to ask you this. If there's a girl you like, how will you tell her?”

Yuuji asks me with those vengeful eyes,

“I'll confess to her directly.”

I'll convey all my feelings to her honestly.

No tricks, just straight to the point.

“I guess so. This method really suits you.”

“Humph. You're going to say, because you're an idiot, right?”

“Hahaha. Your methods are completely different from Takashiro's.”

Yuuji and I laugh out heartily.

“What kind of expression will that guy give...once he finds out that this plan he worked so hard to come up and prepare is wrecked by a simple idiot right before it actually succeeds?”

Yuuji's lips curl into a smile.

I too start to imagine.

Once I think about how that self-conceited upperclassman will react, I too break into a smile.

The ruckus from downstairs reaches our eyes.

We turn around, facing the door leading to the roof, getting ready to run.

Right when I place my hand on the door, Yuuji says these words,

“Our school sure is interesting.”

This line alone reminds me of all sorts of happenings after entering this school. 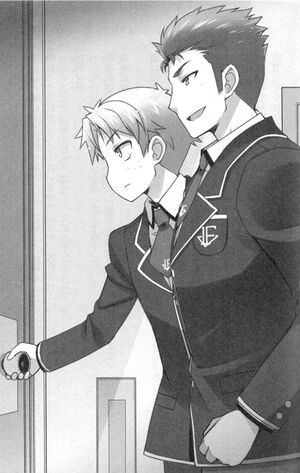 I met a bunch of strange guys, and we started off rocky.

There's a girl who just returned to Japan, bad at Japanese, and unable to get along with everyone else.

There's a girl who had the ability, but was sorted to the worst class just because she fainted in the exam.

These people in the same class are all aiming for the same objective, and we have formed this bond after much joys and hardships.

I turn the doorknob.

I slammed the door open, and we run to the roof.

I love it. This school...and everyone here!

The summoned beast appears according to my call, and I command it to towards the fence preventing any falls surrounding the roof.

There are a lot of things we're unhappy about, that we argue over, but when we truly meet troubles, everyone's willing to help out.

Right now, it's the same. Everyone believes in me, helping this worthless me, pushing me forward.

My summoned beast swings the fist and slams the fence hard.

Because of this, I have to find an answer I definitely won't regret.

Not for anyone else's sake, but for myself.

So that I'm able to face those who helped me with my head held high.

The fence falls over with a thud after it took the attack from the summoned beast.

During the replenishment tests, my mind was filled with a memory that had yet to fade away.

The scene before we first met.

When she was alone in the empty classroom, practicing how to draw with such devotion.

She continued to draw what's not considered a good drawing for a thanksgiving, with such single-mindedness.

We jump past the collapsed fence, and hop onto the ceiling of the corridor in front of us.

I admire the sight of her practicing with such serious.

I was attracted to her heart that kept working on just to convey her emotions.

I was angry that her hard work never paid off.

We simply continue to run forward without looking down, running along the top of the 4th floor's ceiling.

Right now, I'm forced to choose whether to turn all the efforts she worked so hard to get into nothing.

Do I want to say that I want her to stay in this school with me?

Or do I smile and watch her leave for her own future?

Which side should I choose? I wondered with all my might.

My summoned beast swings a fist again, breaking the fence on the new school building.

I have some feelings I want to convey to that single-minded girl.

I have some feelings I want to convey to that girl kinder than anyone else.

I also want to convey the thoughts I have.

Yuuji and I arrive at the roof of the new school building.

Takashiro-sempai got into position once he saw us appear from an unbelievable position.

But I ignore this upperclassman as I snatched the audio speakers located on the roof.

I shall convey this answer I got.

To those allies who helped me.

To Minami, who made sure I'm no longer in doubt.

After checking that the power is plugged in, I press the switch with the broadcast label indicated on it.

Once I touched the volume knob, I turned it to the maximum level.

And then, I slammed the button with the 'begin broadcast' button on it, and pulled the mic attached to it.

A sharp screech can be heard from the speaker.

I thought about this a lot.

I'm very stupid, I don't have a good brain, and I'm not good at thinking, but I thought of this with all my might.

I guess this is the only time in my life I actually thought about things so much.

And after that, I got this conclusion. I can't possibly...leave any regrets behind!!!

I hold tightly onto the mic, and convey all my thoughts into my words. 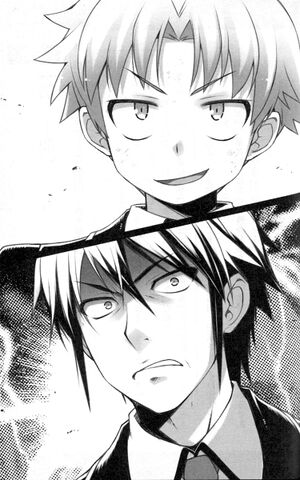 I'm just an idiot, but I don't think that I'm skilled enough to lie to my own feelings. If my words cause Himeji-san to stay here, and causes her path in life to be narrowed, I'll work harder, and harder to open her path in life again! No matter how heavy the price is, I want to be with her!

“I'm going beat this trash of a virgin and hear your answer later!”

I'm going to get a decisive win out of this battle and settle everything.

A howling screech can be heard from the speaker, and the emergency broadcast was ended.

I stare at Takashiro-sempai head on, and issue him the challenge to this final battle.

Takashiro-sempai glares at me furiously.

Bring it on. This—is the end of our summoning war!