Baka to Tesuto to Syokanju:Volume4 The Final Question

Please write the correct English word in the ( ), then translate the following sentence.

How do you translate this? It seems right at first sight, but it’s wrong on so many levels. Since you can’t even translate it into Japanese, then your English needs improvement.

This answer really is an eye-opener. 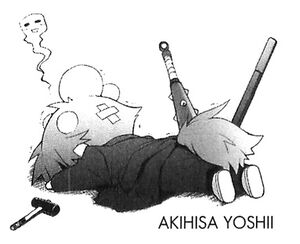 “Wooo……Today really is an unlucky day……”

Ironman’s tuition finally ended, I could go home at last.

There were only a few people still in school. School had already ended, everyone should’d gone home already. Himeji-san said that she had something to do, the others were less likely to wait for me to finish my tuition.

I sighed as I pushed open Class F’s door.

Great, I’ve got to pack my things quickly—Eh? How……

“The three of you still haven’t gone home?”

As the usual trio—Yuuji, Hideyoshi and Muttsurini, actually stayed. What happened? Do they have something they need to do?

“There’s something that I’m concerned about.”

“Something that you’re concerned about?”

Yuuji smiled as if he was very cheerful.

“Yeah. Also, Muttsurini has got something very interesting to tell us.”

Hideyoshi who was standing beside Yuuji was also smiling cheerfully, seemed like he was really happy.

“……Akihisa should come and listen too.”

Muttsurini took out the mini recorder that he always brought with him and put it on a desk.

“Something interesting…..What is it? Seems like everyone is so cheerful, is it really that great?"

“Muttsurini didn’t verify the details, but I guarantee you that it is very interesting.”

Since this guy said that he dares to guarantee it, I guess this thing must be really interesting.

“Eh, what are the contents?”

“Ah, looks like it’s a conversation between a boy and a girl.”

“……A conversation between a boy and a girl?”

Is it someone’s confession? Or maybe it’s a pair of lovers’ quarrel? No matter which it is, I doubt that these three guys have such evil interests.

“It’s a conversation that can clear our doubts.”

I found it shockingly strange. It’s really weird, it seems like something's not right. These three guys are all smiles, but why are the smiles that I see so sinister?

Muttsurini pressed the play button of the recorder, the voice that was played by the recorder sounded rather familiar.

It’s true that it is Shimizu-san’s voice, and everyone also knows that Shimizu-san likes Minami, if so, why do they say that it is a conversation “between a boy and a girl”?

(……For what? Do you still have anything to say to Miharu?)

But….isn’t it weird? Where did I hear those words before?

“Oh! Just, just wait a second! Isn’t this the conversation……”

“Correct. What you actually discussed with Shimizu was all recorded.”

That sinister smile was so obvious that it couldn’t be hidden, Yuuji looked at me with evil intentions.

(Yeah, there’s only one thing that I want to say. It’s because you misunderstood, so I’ll make things clear.)

(Misunderstood? Misunderstood what? The part about you and onee-sama dating is fake, Miharu knew this all long.)

The voices coming out from the recorder, were Shimizu-san’s—and mine.

When Yuuji gave his order, Hideyoshi acted instantly. In a flash, he already locked me from behind, holding my upper body.

This isn't good! I have to stop them fast!

(No, what I meant isn’t that. That……Minami’s charm isn’t only known by you—this is what I want to say.)

“Eh! Let, let me go, Hideyoshi! Only this matter is not allowed!”

Both of my hands are held tight; I can’t even move. Eeeeeeek!

(What did you just say! You always talk to onee-sama inconsiderately, and you don’t even treat her as a girl, no?)

(If so, how dare you say that you know onee-sama’s charm!)

They didn’t even understand how I felt, as the conversation continued being played out by the recorder. If so……

“You are very noisy, quiet down please.”

Yuuji covered my mouth with his hand.

Don’t! I beg all of you, stop listening!

(But, to me, Minami is someone whom I can show my real side to, I find it comfortable to chat with her, and am happy when I have fun with her. I also find some of her little tricks in between her actions rather cute—she really is a charming girl.)

Waaaaa~The voice that came out of the recorder turned the world in front of my eyes blank with white.

Heard? Were those words heard? Did those lines go into their minds?

I looked away shyly to see their reactions.

All three of them looked at me in surprise.

“Uh, yes……I thought that you would say things a little less obvious……”

They heard each and every part of it……That line was not supposed to be made known, but these three guys actually……

“Akihisa, I didn’t know that you’d sound so courageous when you clear things up.”

“How, how is it so, I feel that my heart is beating faster……”

I really want to erase this trio’s memory. What should I do? If I hit them hard enough, will they forget those lines?

Just when I was thinking—

Muttsurini’s expression suddenly changed, then he instantly ran to the corridor.

“What happened? Muttsurini, did anything happen?”

Muttsurini muttered unhappily as he walked back here.

“What do you mean careless? There was someone in the corridor?”

“……The records may have been eavesdropped.”

Eh? Eavesdropped……Don’t tell me it’s the most embarrassing part that was overheard!

“Muttsurini! Who is that someone!”

“……I guess it’s someone involved.”

If so……En, I guess it’s fine, although it’s still embarrassing, it’s acceptable. After all, those were the words that I said to her, it’s better than being overheard by Sugawa-kun.

“I , I guess it’s overheard……Akihisa, I’m sorry, I didn’t know that the contents were like this……”

The three of them bowed their head in apology.

“Never mind, if it’s overheard by someone involved, I guess it’s nothing much. And, if you guys are really sorry about it, you should try and help me make up with Minami! Ever since that issue, our relationship became really bad.”

I managed to retain our old class equipment, but I’ve still got a problem to solve, this is such a drag.

“No, I don’t think there’s any problem anymore.”

“That’s right, I doubt you’ll be needing any of our help……”

All three of them smiled bitterly at me at the same time.

“Eh? How come there’s no problem?”

No good miracles happened, why did they say that there’s no problem?

But, all three of them seemed confident about it—Maybe they’d already spoken with Minami behind my back.

It’s great if it’s true. If so, everything will be back to normal soon. 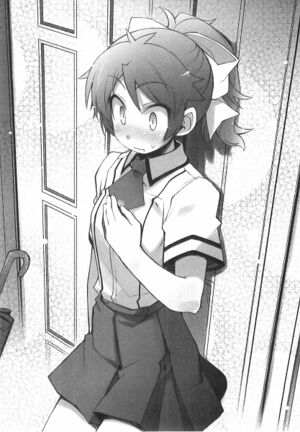 “Eh? onee-chan, did anything happen? You face is really red.”

“How should you what? Is there any problem with school?”

“This time, your onee-chan……has fallen head over heels for someone……”