I’m really grateful to all who bought this book. I’m the author in charge of writing this novel, Inoue Kenji.

If we count the total, this book is the 13th book. If we count by the short stories, this is the 4th volume. Before I realized it, I was really shocked to find out that this work became a long series. The reason why this work can continue like this is all due to the readers’ support and the assistance of the related personnel. I really want to thank everyone.

Then, because of the number of pages, please allow me to insert my customary thanks.

Haga-san in charge of illustrations, everyone looks so cute when their hairstyles were changed in the color illustrations in the beginning! Now the characters of Baka Test have experienced a change in clothes, hairstyle and gender (?). I feel really fortunate to see the faces of all shapes.

K-sama in charge of editing, the term ‘work’ can’t describe how you continued to toil so relentlessly and I really have to show my admiration. If you’re really so tired, I guess the reason is 80% because of Baka Test while the other 20% is due to drinking and diet. I’m really sorry for often creating trouble for you…

Kagaya-san who’s in charge of design, I feel really sorry that the cover design gets a little more complicated for every single volume. You were always able to perfectly complete the job within the extremely constrained time, and your technical skills really helped me out a lot.

To the many people in charge of the anime and the manga, I couldn’t help out at all other than the discussion for the script, so I’m really sorry…I am looking forward to the anime that’s about to be aired and the manga that’s going to be serialized. Once everything’s over, I want to have a good meal with everyone.

And most importantly, the readers! I’m really happy that everyone could support this stupid story with a slow pace release. I will do my best in response to everyone’s support! Also, to my readers who sent fan letters, I’m sorry that I could respond to everyone. Also, I even received a letter saying ‘Because of this book, I got more chances to talk with my son’, and that really touches me. However, how is this mother going to talk to her son about the ‘sou-uke’…I just feel a little horrified thinking about this. I hope both mother and son won’t feel awkward about this…

Then, it’s now time for the useless chat part. What should I talk about here?

—Before that, I have to apologize.

The last time, I wrote in the afterwords regarding the toilet incident, so I’m really sorry. Even I had to blush when I reread it. To be honest, why did I write such an embarrassing thing…even I can’t really comprehend my past actions. I should more or less learn something called self-respect. I’m really sorry.

Then, I want to discuss about underwear this time.

No, this is a misunderstanding. I’m not going to talk about some underwear thief or peeping or anything that feels criminal. It’s just that…well…how to put it? For all sorts of reasons—erm, I think I used this excuse before. If I remember correctly, it was in the afterwords of 6.5.

Speaking of which, I haven’t written about the moving nee-san thing I wrote before. I always had a lot of things I wanted to write in the afterwords, so the page limit bothers me. As there’s a limit to the number of pages I can write, I’m often struggling rather hard.

So, how about this? This book has a questionnaire that investigates the readers’ view, so please write the topics you’re interested in. To make it easy for the person in charge to sort, please write something short and simple in the questionnaire like ‘moving houses’ or ‘toilet’. Then I won’t have to worry about what I should write in my afterwords.

Person in charge: “Then, let’s sort the readers’ views according to the authors. Eh, the thoughts are…”

“△△ series is really interesting! The ending is quite the tear jerker too!”

“I love every book you write, sensei! I’ll continue to support you, so do your best!”

“The characters are all so cute that I love them ♪. I’m really looking forward to the next volume.”

Person in charge: "WHAT WAS THAT GUY WRITING ABOUT!?"

So, better not do that. I just feel that I’ll lose a lot of things if you do that.

As I write about this, there’s not much space to explain the content for each story, so this time, as I pondered about what to write about, I couldn’t write anything because I lacked pages in the end. I guess this is what it means by setting wrong priorities.

Let’s leave aside this and allow me to introduce every story. To the readers who haven’t read this volume, we’ll have to say goodbye here.

“Me and Kids and Summoned Beasts”

This happened between volumes 7 and 8, after the baseball tournament, an extension of the story of summoned beasts that will say their true thoughts. I was really happy when writing about such a exciting story. It would be great if I can write a story about ‘bringing a certain kid-sized summoned beast home’, but it’s really difficult.

“Me and Himeji-san and A Certain Afternoon Time”

This is the story set during the start of volume 8, when Mizuki started staying at Akihisa’s house. “It’s a rare chance to be together. I wanted to write a story where ‘they accidentally meet each other naked in the bath’. I had such an idea, but I couldn’t see any of such things when I reread the story. ‘In that case, I should have both of them go on a date’. I thought as I wrote the outline for the date, but this time, the protagonist ended up appeared with underwear on his head. What do I think romcom is about here!?

“Me and Tsuchiya's House and an Unshakeable Heart”

There’s no need to say it. Everyone knows that this is a ripoff—no, a story in tribute to a certain plan at the end of the year.[1] I thought this would definitely work when I thought of this idea, but it was really hard to write it. This story can teach everyone a truth to the world, and that is ‘a gimmick that’s thought up while staying up at night will seem interesting because of a malfunction of the mental state’. Eh? It means that those who read it won’t find it interesting? That’s not it. You have to think of it in the other way, stay up through the night and lose your sanity before reading it, and that’s how you should think. With this, everyone will find the book interesting, but I guess everyone will likely fall asleep before they do so.

In fact, I intended to write a story about ‘Muttsurini and Hideyoshi’ as stated in the synopsis, but as the story title describes, I only introduced Muttsurini’s family conditions. If anyone was actually looking forward to that, please allow me to say sorry here…

“Me and Quarrels and Unbelievable Idiots”

Volume 7.5 had Minami’s backstory, and this story is a little backstory to that story. Everyone had bad feelings with each other at first, so what about now? As you can discover from the other 3 short stories in this volume, their relationship has gotten to the extent such that they would harm each other. If the time’s right, they might even plot to send each other to their deaths. That’s an amazing friendship.

Leaving aside this, the story mentioned about having two people on a bicycle, but this act in itself is very dangerous, so please do not imitate. You must hurt yourself, and if you hit others on the way, you might even kill them. Please do not ever do that.

Of course, riding a bike while carrying someone of the opposite gender is the same. Such youth—correction, such a dangerous act is forbidden by law. No, of course not, there’s no hidden personal feelings mixed in here. 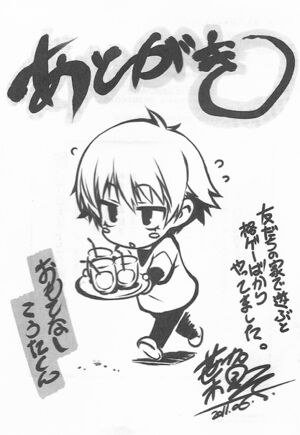 And there’s only a little space left. I’ll have the synopsis to the next volume here.

Sorry to keep everyone waiting! The battle between A class and F class that never happened since volume 1 is about to begin (forecasted)! What will be the outcome to the second challenge of F class? I’ll be really happy if everyone can read it from the beginning till the end.

Then, let’s meet on the stage of Baka Test again.