I’m very thankful that you are reading this book; I’m the novelist Inoue Kenji.

This is the fourth volume, and also the fifth book of this series. I’m able to write sequels because of the readers’ encouragement and the editors’ huge support. Everyone, I’m very thankful.

So, next will be as usual, I’ll give thanks and talk about the next volume.

To Haga-sensei who is tasked with illustrations, when I saw the last volume’s author’s notes, I was really surprised, I’ve never expected Miharu to have such potential! I hope it won’t be much of a trouble for you to give me more of the author’s service in the future. As for the great Kagaya who is tasked with designing, I’m really sorry that I made an unreasonable request even though I knew all along that you are not feeling well. And great thanks to my editor the great N, although many things happened, it was fortunate that you react fast, doing the right things at the right time, it really helped me a lot, I hope that you’ll advise me more in the future.

Of course, there’s also all the readers! Just willing to read my works alone makes me so grateful that I could cry, I didn’t expect that there would be writers who’ll write me letters or their opinions cards to me, I’ve no idea how I should express my joy. Although I couldn’t reply, I read through each and every opinions and impressions in the letters and postcards thoroughly. Every time I finished reading them I feel energized : The passion to continue writing the novel surged through me, I’m really thankful!

Also, one of the reader’s opinions I received is a “Please make me a student of Class F, and involved in the storyline” request, but I’m very sorry that I couldn’t fulfill your wish. There’s also letters like this “Can I establish a ‘Baka and Test – Summon the Beast’ society?” that makes me happy. Of course you can! To let everyone to be happy, I’ll continue doing my best in the future.

About the next volume’s preview, I think I should let Akihisa and the gang study. It seems rather inappropriate for a novelist like me to say such things, but I do feel that they’ve overdone it. And do not forget, Fumizuki School is a famous school.

That’s why, Volume 5 will be written about them burning the midnight oil together before the final exams. But according to their personalities, I doubt they’ll just study obediently.

Okay, the chatting will stop here, it’s about time I talk about the trivial events of my life.

I met a pervert on the tram.

That’s right, although this line seems rather weird. As the name Inoue Kenji, is obviously a “male”. Since I’m not female, nor am I Hideyoshi, everyone must not misunderstand this.

Even so, but just saying this, I guess that everyone is confused, let me clear this issue.

On the day of the long-waited radio drama CD recording, I got on a tram, getting ready to leave for the location where I’d meet the editor. As we agreed to meet in the morning, the tram wasn’t crammed like a can of sardines, but there wasn’t a seat left. Then I held unto a ring freely, and of course I was thinking about the radio drama CD thing. What kind of voice will the voice actors use? What kind of tension will they make? I was like a boy looking forward to an excursion when I thought about it.

At that time, I noticed that rear lower waist (I won’t admit that it’s my butt) has a weird sensation.

That isn’t an accident touch caused by the tram’s wobble—it wasn’t an accident, it felt more like on purpose. If it wasn’t done intentionally, then the person won’t be touching in this way.

I could only think of a possibility by that time—maybe I’ve bumped into a pickpocket.

I usually put my wallet at the right rear pocket of my pants; the enemy must be trying to take it away.

Of course I couldn’t let that person steal my wallet, so I gripped the hand moving near my wallet. If he’s caught out, then it’s all over for him. If I let him know that I’m already aware of what he’s doing, I guess he’ll give up right? If so then the problem is solved, I’ve nothing to be scared of anymore.

While I thought of this—

That person made out such a sound, and suddenly gripped back my hand with force.

That moment, the object that threatened me changed from “economy” into “virginity”. But I’m a big man, how could I be caught up in this kind of danger—wrong! I should say that it’s more dangerous since I’m a guy.

(Wa, just calm down and think, Inoue Kenji. From the feeling of the hand I can deduce that it is a guy, he must’ve thought you were someone else so he touched you. If I just stare at him, he’ll know that he got the wrong person, and then run away instantly.)

Hence, I turned my head towards the window, staring at the enemy’s face fiercely.

Smile~☆(That person smiled back at me heartily)

Why? Why is he smiling so heartily? This guy, are you sure you didn’t get the wrong guy? Could it be that I’m the one at fault?

Obviously I did nothing wrong, what unthinkable is I couldn’t bear to meet his eyes. Even if I wanted to ask for help to free me from this predicament, but I didn’t have any idea to expose him.

If I grabbed his hand and shouted: “He is a pervert on a tram!” I’m afraid that before saving me, everyone would say: “Eh, mister, are you sure?” in reply. After that, the conductor will take me with him to clear things up, and I’ll have to call my editor and say: “I met a pervert, so I couldn’t attend the recording.” I’m obviously a guy, yet I couldn’t attend the radio drama recording as I met a tram pervert, and added that all the characters in my work are a bunch of idiots—how could I face my colleagues in the future?

In the end, I’ll have to endure it until the next stop then get off the tram and scram. Because of this, I’m late by five minutes, luckily I was in time for the meeting, but now there’s a scar on my heart that cannot be erased. Everyone must be more careful, and not catching the eye of a pervert.

That’s why, I noticed too late that there’s no space left to write about the recording process. Since there’s nothing I can do now, I’ll tell you guys the next time I have the chance. 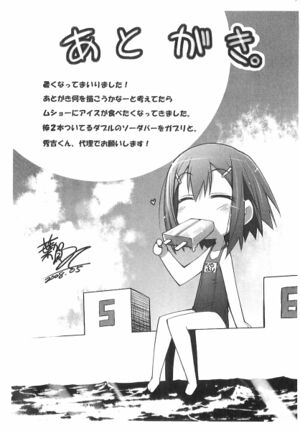