Baka to Tesuto to Syokanju:Volume12 The Final Question

Please write the correct number in the following blank: 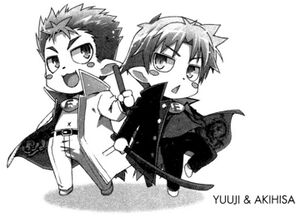 Yuuji, Hideyoshi, Muttsurini and I exchange high-fives with each other. 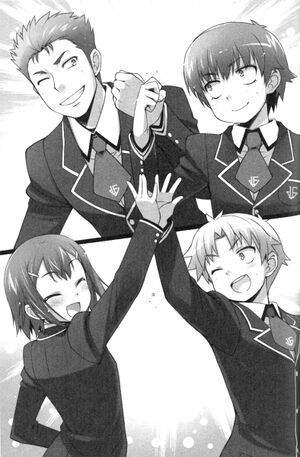 “You guys really did it.”

Right now, it's after the summoning war.

The principal wants to announce something, so we're all gathered in the courtyard.

Minami welcomes me with a gentle smile.

I raise my hand to answer that smile,

“Yoshii, you bastard! You really did it!”

Sugawa-kun, Fukumura-kun and the rest pat me on my shoulders and the back of my head from behind.

These guys too fought alongside us till the end, our F class allies.

Really, we gave everything we had until the very end.

And the proof is—

“Hogging all the benefits to yourself...!”

“You're supposed to be an idiot bastard. Unforgivable...!”

Right now, they're kicking and punching me with all they have.

“Wow, we actually won like that. You guys are really amazing there, Yoshii-kun and everyone else.”

“We really can't match up to them.”

“Erm, prez, Kubo-kun, those guys we can't beat and the husband you're proud of will continue to start summoning wars against us class A, you know?”

To put it nicely, I'm taking the violent praises from everyone. Right now, I'm being kicked madly by everyone present after I took a sweeping kick. Isn't this just bullying right now?

“What are you guys doing!?”

After Ironman roared, those guys kicking me scattered like birds.

I stand up and pat the dust off.

Ironman stares at me intently. Well, I guess I have to thank him for saving me.

“Thanks for helping me there, Ironmaaa!?”

“Haha, Akihisa, why did you get beaten by Ironmaaa!?”

Ironman slammed his giant fist on both Yuuji and my head, and then walks away slowly. Wh-What's going on...?

“That bastard Ironman! It's alright if he just beat Akihisa. Why did he beat me too...!”

Both of us rub the place where we just got punched with tears in our eyes.

Kirishima-san and the rest watch us from the side as they chat away.

“...Why did Yuuji and Yoshii get beaten?”

“Um...Nishimura-sensei must be having mixed feelings right now, I guess?”

“What do you mean by mixed feelings, Kubo-kun?”

“As a teacher, he can't leave them alone after they did something dangerous. He knew however that they had a belief they had to follow through with, and chose to beat them instead of lecturing them, maybe?”

“A teacher really has to deal with all sorts of troubling things, huh?”

Since he's a teacher, I thought that there're other ways of punishing us besides corporal punishment!

“But that was really a ridiculous way of breaking through.”

“Seriously. I can't believe that Aki and Sakamoto ran on such a dangerous place.”

Hideyoshi and Minami recall our actions running on the roof as they said,

“But there's no other choice right? We don't have any other road.”

“You destroyed the fence and run on the roof 4 levels high. If any bystander sees it, it'll cause a major problem.”

“Also, you even used the microphone to confess your love so loudly to the entire area. Maybe you might get a harsh punishment this time, Yoshii-kun, Sakamoto-kun.”

Leaving aside Minami, even Kinoshita-san and Kubo-kun has said so. I recall everything I did just now.

Hmm...I was a little hot in the head, but I think I went a little overboard there...?

“That's troublesome, both for Aki and Sakamoto.”

“I never knew about the full extent of the operation at first.”

Those guys we were working together with a while back now choose to protect themselves.

But I did all these with such readiness. As for whatever punishment that comes, I'll just accept it.

“Looks like neither of you want to accept responsibility.”

“A-Akihisa-kun, I do have some involvement in this, so it's about being punished, we can both...”

“No, Himeji-san, I'm grateful for your kindness, but that's probably impossible...

“Himeji was in the detention room all this while. She has nothing to with all the mess Akihisa came up with himself.”

“Wait, Yuuji, don't think of pushing all the blame on me.”

And also, this guy was the one who came up with the plan. I'm just following orders here, so if we're talking about responsibility—

I feel a thud on my back. This voice probably belongs to Linne-kun, right?

“You were so cool just now! I was really touched at the end!”

“That's enough already, brat. No matter how cool you think Akihisa is, don't go about telling everyone that he's the one who came up with the plan itself.”

“I say, Yuuji, why're you pushing all the blame on me?”

No matter how we try to distort the evidence, Yuuji's the sole culprit behind this entire thing.

“So cool. I think I've fallen for you, Akihisa!”

Why? I just feel that there's a chill on my back when he said that.

“But Akihisa, a hero isn't just for a certain person! A hero belongs to everyone, you know?”

I show a grimace on my face, and Linne-kun continues,

“That's why I did my best so that you can continue being a hero, Akihisa!”

Did his best? For what?

“I'll look forward to it then, Linne-kun!”

“What did he mean back then?”

“Who knows? That brat can't possibly come up with anything decent, right?”

While we're chatting away,

“The principal wishes to say something from now on. Everyone, please be silent.”

Takahashi-sensei's voice can be heard from the speakers. Oh goodness, we're now going to end everything after this gathering?

Anyway, I turn my face forward, and I see the principal pick up the microphone from the podium on the stage.

”Ah— all of you have done your best, both the 2nd and 3rd years. I shall praise you for that.”

The principal starts to speak with her usual lazy tone.

“As everyone knows, this test summoning system is an education system only our school has, a symbol that allows our school to gain attention from both domestic and foreign areas. Many students worked very hard to in this war between school year with the help of this system, and the entire process was really exciting.”

I think it's probably because besides the entire school body, the inspector Linne-kun is also here, right? The principal's tone hasn't change, but at least she praised us.

“I too learned lots of things from you students in this summoning war, whether it is about the mistakes in this school's directions, or about the things important to you students.”

The principal's words fill my heart.

I too thought about lots of things this time, and also learned from them. I suppose this is what they call valuable experience.

“I shall bear responsibility for these mistakes. I do wish that you simply focus on your studies and mature...that is all.”

Once the principal finished her words, she got down from the stage.

“Thank you very much, principal.”

The voice of Takahashi-sensei, the emcee, can be heard.

From now on, Fumitzuki Gakuen will have some change, from a direction that focuses on studies.

I guess the principal saw from us in this summoning war what are the truly important things, and also what we did for those causes.

Himeji-san, standing beside me, whispers to me softly.

I too whisper back to her

Yuuji too asked the same question before my battle against Takashiro-sempai.

In this case, I think Minami, Hideyoshi and Muttsurini will ask me the same thing.

A lot of things happened ever since we enrolled in this school.

I met a lot of people, made some bonds, and we deepened them.

And right now, we got such a new experience, and new bonds.

That's why to me, no matter how many times I'm asked this, the answer is always the same.

We will still gather in this school before we graduate.

All sorts of things will definitely happen in the future, right?

At that time, we will be troubled, think about them, and change with them.

Along with this school, as the principal said.

Along with this hardworking girl standing beside me, who formed a new relationship with me.

A notification in the change of school rules

Love between students shall be forbidden.

Himeji-san and I ended up back to being normal friends.