Baka to Tesuto to Syokanju:Volume1 The First Question

"...Yuuji, when were the Taika Reforms again?"

"You're already a third year and you still don't know? You really are dumb, Shouko."

"...We haven't been taught that part yet. You're just too smart."

"It's because there were no accidents that occurred during the Taika Reforms. Make sure you remember that. "

"Good. Make sure you remember."

To reduce the weight of frying pans, magnesium is used in the manufacturing process. However, this will cause an undesirable result when used in cooking. Describe what happens and name an alloy that could be used to replace magnesium.

A violent chemical reaction will occur when magnesium is exposed to direct fire, causing it to burn. Instead, duralumin could be used to replace magnesium.

Correct. The question specifically asked for an alloy, so answering "iron" would be incorrect. You weren't tricked. 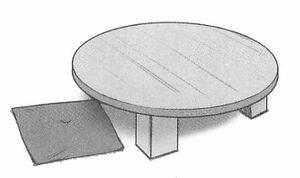 Because the gas bill wasn't paid.

That is irrelevant to the question.

Futuranium could be used (<- it'll be super hard).

That hasn't been discovered yet, has it?

This is my second spring here in Fumizuki Academy.

To welcome new students, both sides of the slope leading to the academy were filled with dazzling, flowering cherry blossoms. I'm not the type of elegant, classy person to stop and appreciate the sight but it was just so beautiful that I couldn't help but become mesmerized.

That happened for just an instant, though.

My mind was certainly filled with the thoughts of spring, but they weren't about cherry blossoms. However, I was eager to find out what my new classroom and who my comrades of war, whom I will be sharing it with, will be.

A stern voice greeted me once I reached the gates. I turned my head and looked towards the direction of that voice. A short haired athletic-looking man with a lightly tanned complexion was standing there.

I bowed my head slightly as I greeted him. After all, he IS the demonic counselor, Mr. Nishimura. You're definitely in for trouble when he calls your name.

That was close; I nearly called him "Ironman" like I always do.

By the way, he was nicknamed "Ironman" because of his hobby of entering triathlons. Of course, his habit of wearing short sleeves even in the coldest winter days contributed to that as well.

"That aside, you're not going to just greet me are you?"

"...Are you more concerned with my skin tone rather than a proper apology for being late?"

"So that was what you meant. I'm sorry for being late."

He let out a sigh as he mumbled that. What he said made me sound like a person who comes late on a regular basis.

He was my homeroom teacher last year, so he should know the number of times I was late for school.

"Never mind that, just take this."

He took an envelope out of a box and handed it to me. My name, Yoshii Akihisa, was clearly written on it.

I nodded politely to him and took the envelope.

"Why is the school handing out the results of the placement test in such a troublesome way? Wouldn't it be easier to just post it on a bulletin board?"

It seemed very inconvenient, putting each student's result into an envelope and handing them out personally.

"We would have done that if we were just another regular school, but our school is the first in the world to use such a cutting-edge examination system. This is why we're handing out the results individually."

I answered him as I fumbled with the envelope. I couldn't wait to find out which class I had been placed in.

Students who were second-year and above at Fumizuki Academy are allocated into different classes from Class A to Class F, depending on the class examinations. Simply put, geniuses will be in Class A, idiots in class F, and everyone else in between. Your intelligence level will be indicated by your class placement. In order to protect my manly pride, I will do whatever it takes to not be in Class F.

The envelope was glued shut, and I was still trying to open it.

"After a year observing you, I wondered, 'Could Yoshii really be an idiot?'"

"You're greatly mistaken about that, sir. I would have to add 'Moron' to your nickname if you were being serious about that."

I wasn't trying to brag. I didn't study much for last year's examination, but I felt pretty good about how I fared in it. Surely he must have changed his opinion of me when he saw my results.

"Indeed. When I looked at your results, I realized how mistaken I had been."

I just couldn't peel it open. Oh, well, guess I'll have to tear the top part off.

Which class will I be in? Is it Class D? Maybe Class C?

"Be glad, Yoshii. My doubts for you have completely disappeared."

I unfolded the piece of paper inside, and read the words written on it.

"You really are an idiot."

Thus, my life in the worst class began.