Thank you for picking up this book; I am the author of this novel, Inoue Kenji.

Without knowing it, this series has already reached its eighth volume. I really didn't expect to be able to come this far! To all of you who have accompanied me on this journey, I thank you. I promise to continue working hard from now on!

On a side note, the pages given for the afterword aren't much, so I apologize for not being able to talk much this time. Although, I do have much to say to thank everyone, as well as many interesting day-to-day encounters to share! It’s a pity I can’t, but please allow me to at least write the title of what I had actually intended to share this time.

~ Allow me to explain the contents of the box ~ »

That’s not it! This is a misunderstanding! It’s not that there is any H-stuff in there. It’s just that… well, there’re many reasons…

I’d like to explain it in detail, but regrettably, there’re not enough pages, so I guess I’ll have to find some other time to do so… If only I could have about 10 pages for the afterword…

Well, let’s leave that aside and talk about the more important matters.

As this may include spoilers, I’d like to suggest those who haven’t read this volume yet to not read this first.

First of all is an important note.

With regards to the above recipe, I urge all to never attempt it.

When talking about strong digestive organs, we usually associate it with the ‘iron stomach’ expression. Regardless, even if the stomach is really made of iron, this dish would, without any hesitations, melt that piece of iron. Though this may be a solution to over-eating or indigestion, please consider this matter carefully. Minor ailments, like over-eating and indigestion, are completely incomparable to something as priceless as life. Also, although adding sulfuric acid to starch does result in hydrolysis, one cannot simply take matters as such. If you want it sweet, please just settle it with sugar, which would be enough. Similarly, if you want it sour, add lemon juice, not chloro-acetic acid! There is completely no need to ignore easily obtainable ingredients from the supermarket, and substitute it with dangerous chemicals. In the first place, meat does not need to be sour! In addition, it is equally dangerous to add sulfuric acid into food, even as a preservative. Should there be a need, just put it into a vacuum container and put it in the freezer. Beef and Potato Stew, transcending the laws of nature, releasing pink or green gases, are better known as ‘biochemical weapons’ in the 3-dimensional world. Saying that “I am only making Beef and Potato Stew” after the neighbours have called the police would only warrant psychological test during the trial. Therefore, I ask all to never attempt it.

Continuing on, is the explanation for the short stories.

Though I have discussed with the editor-in-charge during the planning stages, during then, he told me “it’s also okay for me to try writing more freely”.

Therefore, while drowning in this happiness and freedom, I ended up with the cruel reality of writing about cross-dressing in three of the four stories. What? Just which way does this Inoue Kenji swing? No matter what, please do not think that I have misunderstood the meaning of the word ‘freedom’.

The past between Yuuji and Shouko… I apologize for not writing it with the usual idiotic style. I would feel honoured if those who are unused to it were to take it as an end of volume appendix.

Well, well, before I noticed, I was only left with a few lines. Then, it shall be the usual customary thanks, my apologies for it being slightly simple. Haga-sensei in charge of the illustrations, N-sama in charge of editing, Kagaya-san in charge of the ideas as well as a certain reader, thank you, it’s been tough on you all this while. Although all of my tributes have always been like this, but my feelings are, without a shred of pretension, filled with gratitude. Then, I will still be in the care of everyone here from now on!

Then, let us meet again next time on the stage of Baka Test! 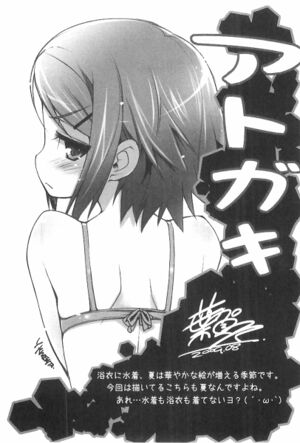