Baka to Tesuto to Syokanju:Volume9 The Final Question

In the past, to cure the illness of those with authority, the shaman will,

“Use both hands to make imprints, use the vajra, have a massage-like ritual, and start chanting’.

What does the ‘vajra’ here refer to?

“It’s a Buddhist tool used as part of prayers with the objective to cure illnesses.”

Correct answer. This ‘vajra’ is ‘a weapon used to chase troubled and demons away’ when praying. It’s a weapon, so it’s either made from brass or bronze. The vajra is classified as three-pronged, five-pronged or more. There will be photos for introduction later, and you can have a better impression after looking at them.

“A thing that is crushed and given to patients to drink for curing illnesses.” 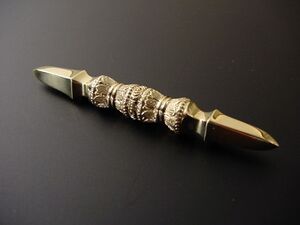 It would, probably, be extremely hard to make it into a solution.

“Something used to stuff into the backside to cure fever.” 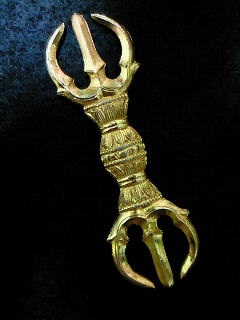 That would be a really extreme solution.

“Principal. About the exchanging of facilities between C class and F class.”

“Oh ya. Those brats would finally change their facilities?”

“So in other words, C class now have F class’ facilities? That’s quite the drop.”

“They themselves declared war, so they couldn’t grumble there.”

“I never thought of hearing any grudges about winning or losing—and then. What did the brats from F class do?”

“Ehh. Once F class got C class’ facilities, they challenged E class to a summoning war.”

“E class? Looks like they intend to make use of other classes without learning their lesson. It ended with a peaceful ceasefire, didn’t it?”

“Oh my. So that happened. I didn’t expect a victor there. Looks like they were ambushed from behind or something.”

“The C class facilities F class got were exchanged with E class that was supposed to have downgraded facilities.”

“I think it was like ‘since we can trade facilities, let’s use this right’ or something.”

“Well, it’s not against the rules anyway. Really…exchanging facilities with a losing class. What are those brats planning to do next…?”