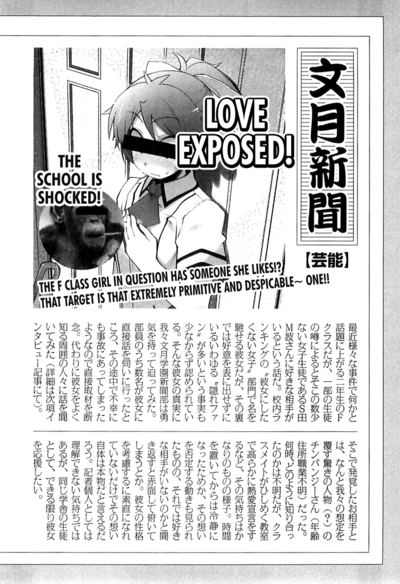 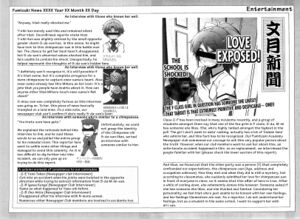 Class 2-F has been involved in many incidents recently, and a group of students amongst them say that one of the few girls in F class, S-da, M-mi has someone she likes. She, who’s highly ranked amongst the highest in the poll ‘The girl I don’t want to date’ ranking, actually has a lot of ‘hidden fans’ who admire her, and this fact has to be recognized. Our Fumitzuki Academy Newspaper club summoned our courage to ask this very popular person about the truth. However, when our club members went to ask her about this, an unfortunate accident happened in this, so as replacement, we interviewed the people familiar with her (please check the lower section of this report).

And thus, we found out that the other party was a person (?) that completely confounded our expectations, the chimpanzee-san (Age, address and occupation unknown). How they met and when they did is still a mystery, but according to classmates, she suddenly admitted her love for chimpanzee-san in front of everyone in class, so it seems that this affair of hers is true. After a while of cooling down, she vehemently denies this however. Someone asked if she has someone she likes, and she blushed and fainted. Considering her personality, we feel that she’s just unable to be honest with her own feelings, and her feelings themselves are real. As a reporter, I do not understand her feelings, but as a student in the same school, I want to support her with all I can.

An Interview with those who knows her well.

“Anyway, that really shocked me.”

Y-shii-kun merely said this and remained silent after that. Unconfirmed reports state that Y-shii-kun was slightly enticed by the small opposite gender charm S-da-san has. In this sense, he might have lost to this chimpanzee-san in this battle over her. The chance to get her back hasn’t disappeared, but S-da-san’s abnormal values shocked him, and he’s unable to contain his shock. Unexpectedly, he helped represent the thoughts of S-da-san’s hidden fans.

An Interview with those who knows her well.

“I definitely won’t recognize it. it’s still possible if it’s that swine, but it’s complete arrogance for a mere chimpanzee to capture onee-sama’s heart. Also, onee-sama already has this Miharu as her lover. It’s a joke that you people have doubts about it. How can anyone other than Miharu touch onee-sama’s flat chest!”

S-mizu-san was completely furious as this interview was going on. To her, this piece of news basically trampled on a land mine. On a side note, our newspaper club can’t confirm if she’s really S-da-san’s lover.

An interview with someone who’s similar to a chimpanzee

Unfortunately, we could not grasp the identity of the Chimpanee-shi S-da-san likes, we had an interview with someone similar to him.

You brats sure have guts.

We explained the rationale behind this interview to him, and he said these words to us and pulled the entire group to his remedial room. This reporter here went to settle some other things and managed to avoid this calamity. As it is too difficult to dig further into this incident, we can only give up on trying to do this report.

A solemn moment of condolence to our comrades.

Got into an accident when his joints were twisted in the opposite direction while trying to extract information from S-da M-mi-san.

Same as what happened to Yano-shi before.

Disappeared after his interview with N-mura-sensei.

Numerous other Newspaper Club members are involved in accidents too. 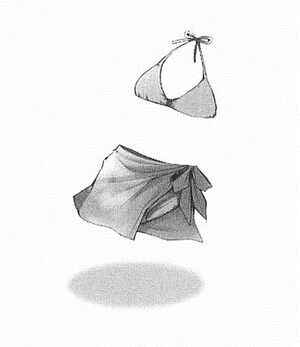