Baka to Tesuto to Syokanju:Volume3 The Final Question

Please form a four worded Japanese idiom from the following romanization, and come up with a suitable sentence with it.

The sentence: 'the distribution of responsibilities is rather ambiguous 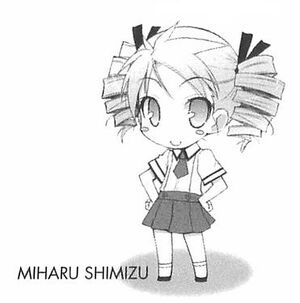 I get the feeling that at least you're trying to answer this question.

'Example: The three beauties Ono no Komachi, Ono no Imoko, and Aima Imoko[1] started on their journey as envoys.'

Please do note that you included a male in that.

After our suspension ended, I felt rather thankful as I arrived at the school gate earlier than usual.

"Really, it feels like I haven't been at school for quite a long time..."

Including the time off for training camp, it's been about two weeks since I last stepped into school. That's longer than spring break. To be able to have a long break at this time, in a certain way, that's rather lucky—but no one will feel this way, right? Who asked the teachers to come up with so many assignments, not even allowing us any time to reflect?

The sound of small running footsteps reached my ears.

Even though we were only shut off for a week, considering that I could have seen Himeji-san everyday, it felt like three autumns had passed. We really hadn't met for a long time.

"Truthfully, I have something I want to apologise to Akihisa-kun for."

If I was the one who was supposed to apologise, then I had nothing to say, but did Himeji-san do something that she really has to apologise for?

"It's the first day of training camp—I mistook you for the peeping tom!"

Himeji-san bowed down and lowered her head in apology.

"Eh, no matter whether you mistook me for a peeping tom, I still became one in the end..."

"Ah, it's not that, I don't mean that. Didn't I misunderstand you in the beginning? At that time, I actually doubted Akihisa-kun's innocence, I'm really sorry about that..."

As long as Muttsulini's our friend, it's not rare for the girls to treat us like perverts.

"Ah haha. We ended up peeping in the end, so it's a little weird for you to apologise to me."

But speaking of which, it's rather strange of you to be talking to me like usual when I'm a peeping tom. Ah, but if so, you won't be able to talk normally with all the boys from the second year.

Should I not have replied 'yeah'? I'm really a big idiot.

Strange. She doesn't seem to be looking directly at me.

"Great, seems like Akihisa-kun still has an interest in girls."

I see, so it's better to be treated as a pervert than a homosexual, huh?

Seeing me in agony, Himeji-san seemed to smile happily. Mm, is she making fun of me? I have to respond in kind to her.

Himeji-san blushed till her face was all red. Seems like my response was rather good.

"Hahaha, just joking! This is revenge for making fun of me, Himeji-san..."

At this moment, my mind just went blank.

"EHH? WHAT ARE YOU SAYING!? HIMEJI-SAN, ARE YOU ALRIGHT?"

The unbelievable reply made me doubt my ears. Is it really alright to allow me to do this?

"But—I have to be Akihisa-kun's wife first!"

Hold on a minute, what's with the development up till now!? What's the situation now!? Anyway, got to calm down first...right now, I have to think of a honeymoon destination. Would it be old-fashioned for me to chose the beach? It's better to go overseas for a honeymoon, huh? However, I'd have to request for a break from school.

The sudden gentle laugh made me lift my head, and the moment I lifted my head, I saw Himeji-san smiling happily as she blushed.

Eh? Don't tell me that what she said—was another joke?

I got fooled again...to think that she would counter me like this, as expected of Himeji-san!

"Hahaha, Akihisa-kun, your face is all red now."

"Of, of course it is, isn't Himeji-san blushing because you're saying words that you're not used to?"

At this moment, we smiled at each other. This way of conversing really is rather refreshing.

Just as we were smiling at each other, there was a forceful and terrifying shout. Is that Minami?

I turned towards where the voice came from, and as expected, Minami was running towards me with enthusiasm.

Her expression seemed rather serious. What's going on?

Seeing Minami acting so strangely, Himeji-san was shocked as well.

The moment she arrived in front of me, Minami suddenly made this request.

Is she trying to punish me for peeping?

Can't be helped, I'll just take a punch from her.

I obediently closed my eyes, waiting for the incoming impact.

What's going on? She doesn't seem like she's going to hit me.

I timidly opened my eyes, and what appeared in front of me was Minami, who was blushing as her face closed in.

The moment I realised it, Minami's lips were already pressed onto mine... 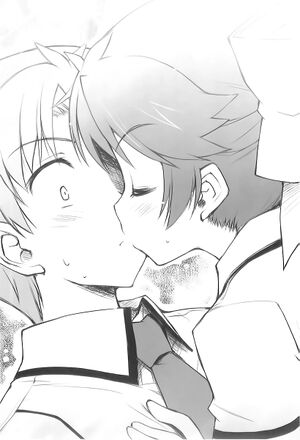